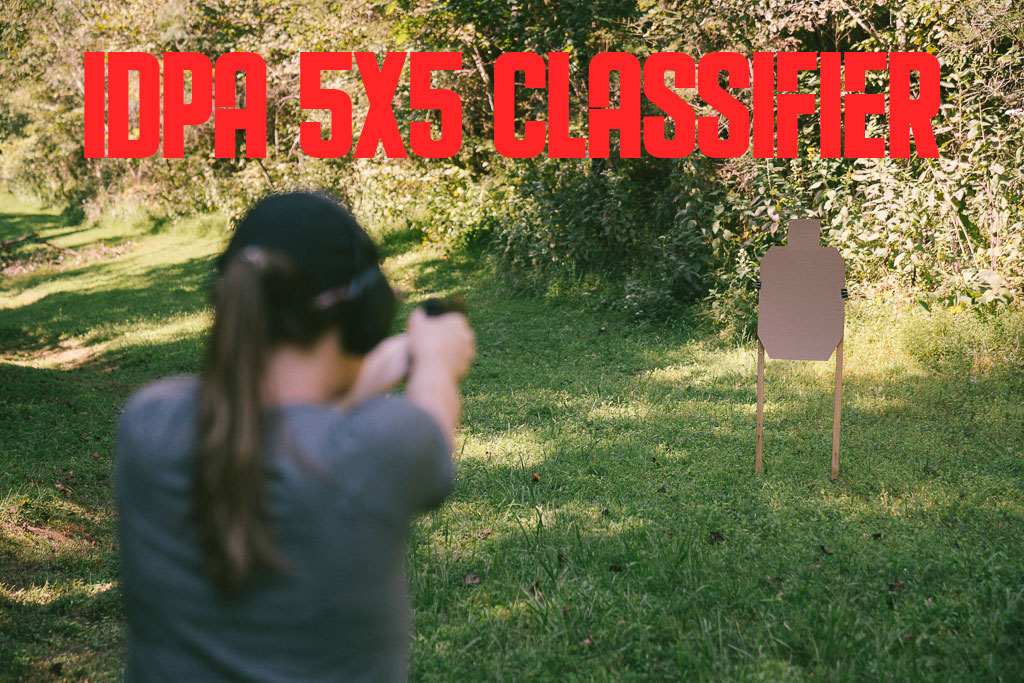 The International Defensive Pistol Association, or IDPA, has been experiencing tremendous growth in the past few years. If you’re going to jump into IDPA, one of the things that you’ll have to do as a new shooter is try your hand at the IDPA 5×5 Classifier.

What Does It Mean To Get Classified?

Getting classified means that you, the shooter, have a rank based on your shooting skill that’s assigned by the IDPA. In IDPA, each rank competes against itself to be the winner of that classification and division. If you’re just showing up for your first IDPA match, your classification would be Novice.

After novice, the other classifications, in ascending order of skill, are Marksman, Sharpshooter, Expert, Master, and Distinguished Master.

You can only achieve Distinguished Master or DM by winning a national championship, or by finishing within 3% of the national champion. You could shoot any of the other remaining classes based on your score on the IDPA classifier. 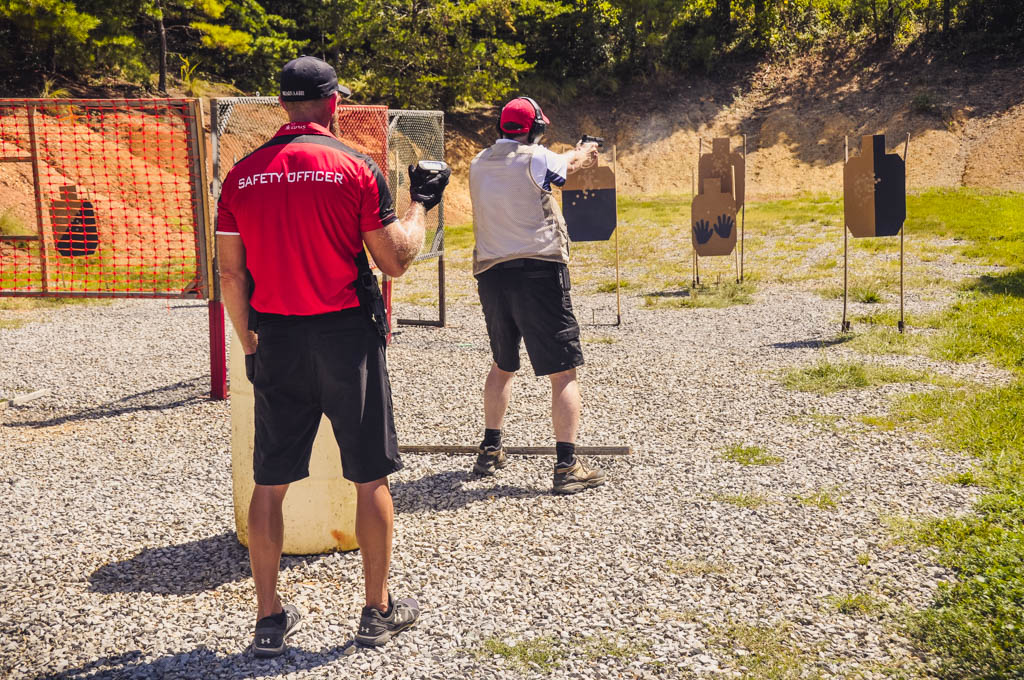 Until recently, IDPA only had one classifier. It was originally a 90 round course of fire the association modified to be shorter and more time efficient. Unfortunately, it was still long and time consuming. It didn’t really solve the problem of how to classify a lot of people in a short amount of time. 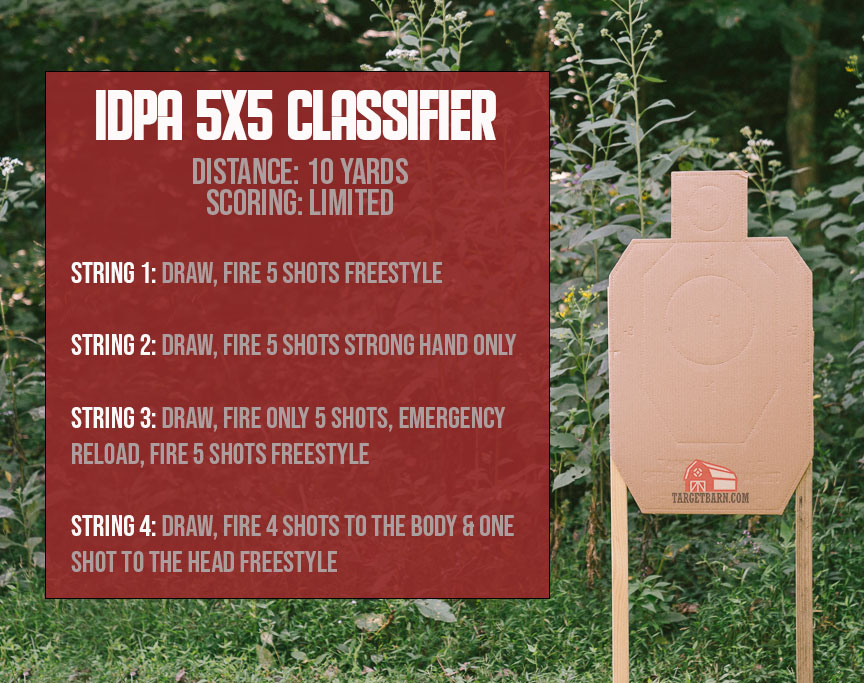 To understand the 5×5, let’s break it down into its components. It is 4 strings of fire, 3 of which are 5 rounds each, and one of which is 10 rounds. The competitor fires all shots at a distance of 10 yards away from a standard IDPA target.

If you want to shoot your absolute best on the classifier, there are a couple of tips I can share that might help.

The first tip is simple: get better at shooting! This means a steady diet of dry and live fire practice in focused training sessions using established drills. Combine that with a few formal classes from reputable instructors like Scott Jedlinski or Ernest Langdon, and you’ll have all the tools you need to succeed. But you probably didn’t click this article in search of advice that amounts to “git gud scrub” so here are some more tips.

How to Improve Your 5×5 Score

Aim your butt off. The temptation on the 5×5 is to blaze it because it is a single target at 10 yards, but the penalty for a bad shot is so rough in IDPA that you cannot take a single shot for granted. Starting with string 1 and through the entire course of fire, aim hard.

Set your feet before you draw the gun. Your feet and lower body are the foundation of the house we’re trying to build when we shoot. I have seen a ton of people draw the gun for a strong hand only string and try to get their feet set up while they’re drawing. On the 5×5 classifier, you should have your feet set up how you want them to be when you’re firing before you even draw the gun.

Don’t rush your reload! The most common place that I will drop a shot on the classifier is the first shot after my reload. I’ll fire five good shots. Then, I do a sweet slide lock reload…then rush the gun back on target and shoot a -1. Don’t do that! Keep aiming your butt off.

If you weren’t sensing a common theme before you should now. The most important thing on string 4 is don’t toss your head shot. The IDPA head box is a 4 inch circle, and best case scenario if you miss is down one point. A likely scenario is to completely miss the head and end up down five points. Your common theme through all of this is to aim! 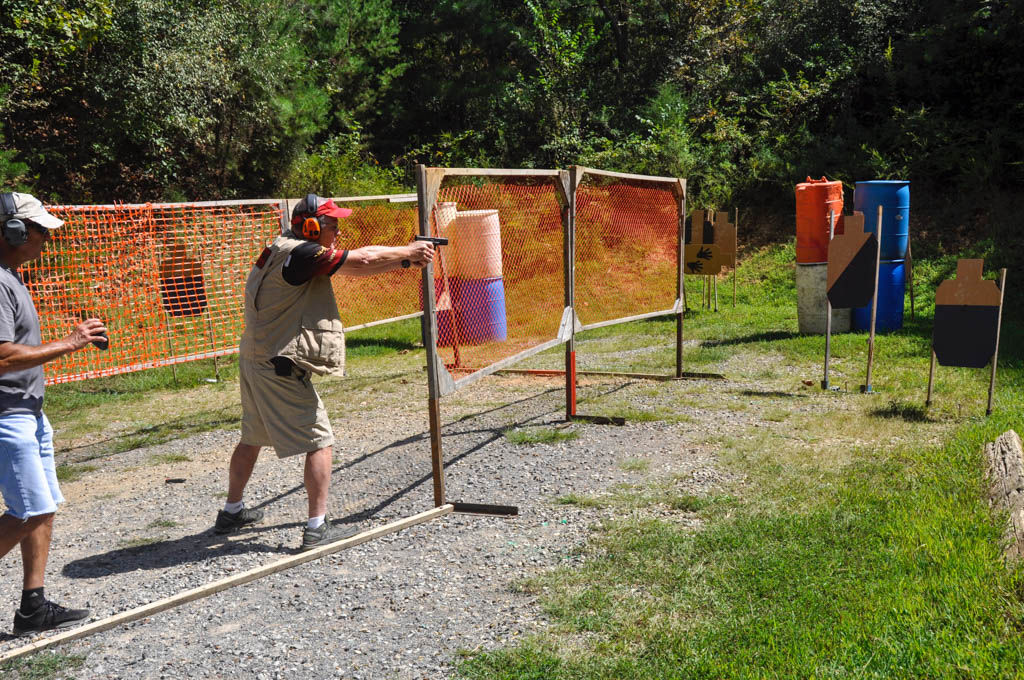 The IDPA 5×5 classifier is a great addition to the sport of IDPA. It really helps move the classification process along, which is awesome. It’s a great way to test your skills against an established standard. Even if you’ve never been classified in IDPA you can set it up and shoot it on your own time to see where you stack up. Are you good enough to make Master? Only one way to find out!