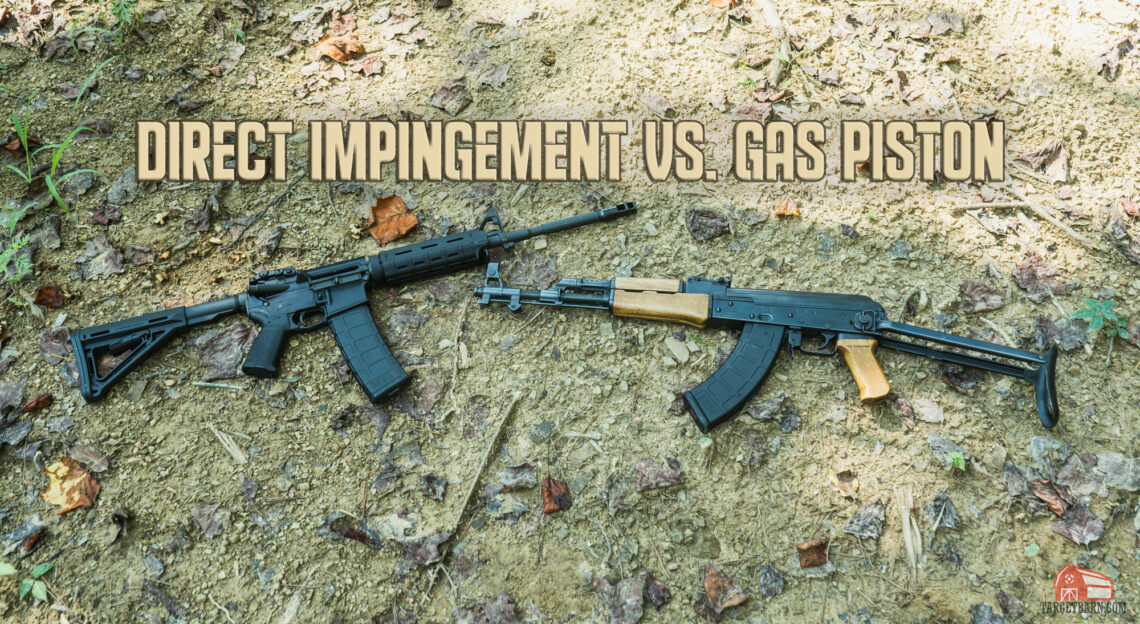 If you ever want to start a really good internet argument, go on any AR15-focused forum and ask “which is better: direct impingement vs. gas piston?” Guaranteed you’ll get 8-15 pages of people going back and forth. The truth is that neither system is inherently better, and both systems are good at different things.

Let’s take a look at the differences in direct impingement vs gas piston ARs.

Direct Impingement vs. Gas Piston: How They Work

First, we’ll explain what each system is and how it works.

The direct impingement, or DI (because I’m already tired of typing “impingement”) works by siphoning some of the gas that propels the bullet. It runs the gas through the gas tube until it hits the gas key on the bolt. That gas pushes the bolt to the rear as part of the cycle of operations.

Gas piston guns have some advantages, most notably that they run cleaner than DI guns. Because no gas is venting into the action, there’s less fouling and build up on the bolt carrier. They also tend to run cooler, although you have to do a lot of rapid fire to see this benefit.

Gas Piston vs. Direct Impingement: Which is Better?

But what you really want to know is “which is better,” right? Of course you do. The answer is “neither” because as long as you’re buying a quality gun from a reputable manufacturer, you’ll be fine.

Early on, there was a perception that gas piston guns were more reliable than DI guns, but that’s not true. That myth was born because people were comparing high dollar gas piston guns like Primary Weapons Systems to cheaply made DI AR15s, in which case the gas piston will always seem superior.

Nowadays, we live in the golden age of semi-automatic rifles. It’s possible to buy a new rifle for $1500 that is going to work and will last you for probably the rest of your life, regardless of whether it’s a gas piston gun or direct impingement.

What About Full Auto Rifles?

Gas piston rifles are superior to direct impingement rifles in sustained full automatic fire. The USMC recently selected the HK416 as its replacement for the venerable M249. The HK416, chambered in 5.56, is capable of significant volumes of sustained automatic fire thanks to its gas piston system and a little German space magic.

But if sustained fully automatic fire isn’t in your future, then direct impingement is probably the right choice for you, for two reasons. The first is cost: a quality DI rifle is going to be more affordable than a quality gas piston gun. The second is aftermarket parts availability: it’s going to be way easier to change parts on your DI gun, since the vast majority of AR15s that are manufactured are DI. People inevitably want to change stuff on their ARs.

The AK47 – The Most Common Gas Piston Rifle

With all that in mind, there is one option if you’re really committed to getting a gas piston gun, but you want something affordable with a large aftermarket: an AK47! Okay, I’m mostly kidding, but the AK47 is the most common gas piston semi-auto rifle on the market these days, and does have a viable aftermarket.

Direct Impingement vs. Gas Piston: A Matter of Preference

I know I didn’t tell you which system is best, because I don’t believe that one is truly better than the other. They’re both designed to make the gun work, and when either system is implemented by competent manufacturers, they work great.

Perhaps that’s the moral of the story then: buy the right gear the first time. Don’t go cheap on what could be a piece of life-saving equipment.