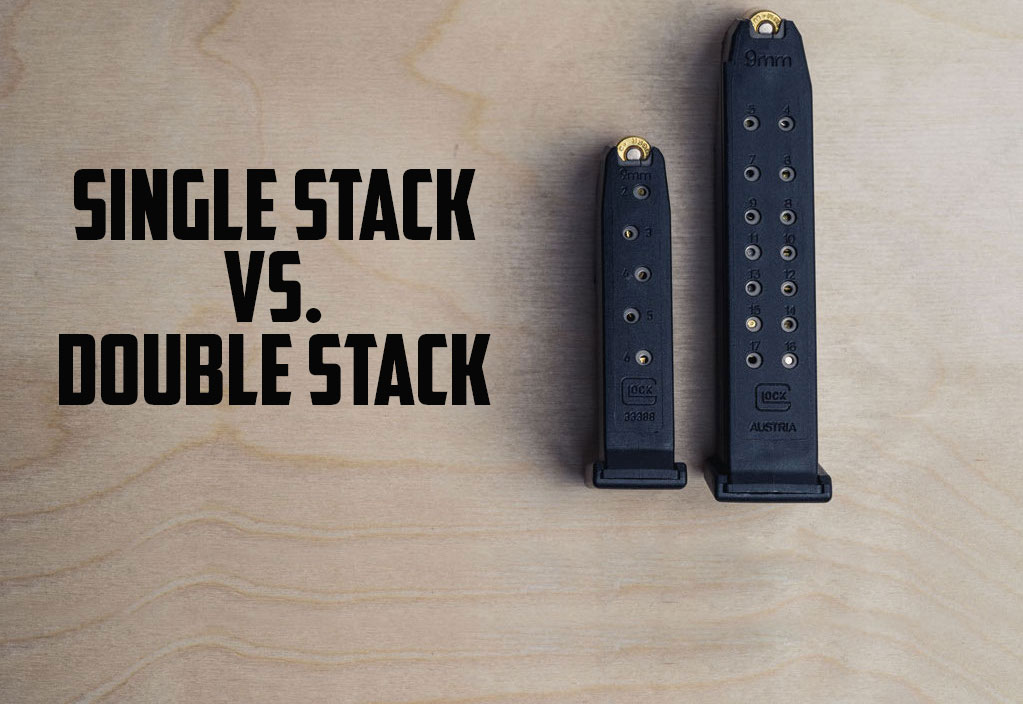 As Americans, knowing the difference between a single stack vs. double stack is important in two situations. If someone is offering us pancakes or hamburgers, we must always know to ask for a double stack. When it comes to magazines used in guns, the difference is slightly more complicated, but asking for the double stack still means getting more.

Man invented many types of mags over the years. Early repeating rifles and pump action shotguns have tubular mags, which are integral to their design. Most modern semi-automatic rifles and pistols have a detachable box mag, which makes reloading fast and easy. Simply pop the empty mag out of the receiver and replace it with a full one, and presto! You’re shooting again in no time.

A double stack is necessarily wider than a single stack, because it accommodates about 1.5 times more ammo in the same vertical space. This matters most when it comes to concealing a handgun.

If you plan to carry a pistol that is easily concealed, you don’t want it to be too wide. A bulky firearm can be more easily seen through clothing. It is called “printing” when the outline of your concealed carry is visible through your clothing, and printing can draw unwanted attention. Compact semi-automatic handguns like the 9mm Glock G43 and the M&P Shield have low profiles because of their slim single stack mags.

The single stack offers another key advantage. A shooter with smaller hands may have trouble handling a pistol with a relatively wide grip. A single stack makes a pistol’s grip slimmer, letting a shooter with a slighter frame control their weapon more easily. There’s a reason why the Taurus Spectrum, which is available with pink grips, is a single stack as well.

All of this comes with the single stack’s main disadvantage: its smaller capacity. Compare a six round G43 mag to a double stack Glock G17 mag, which holds 17 rounds. While most self-defense situations don’t call for that many shots to be fired, it’s undeniable that it’s always better to have more shots available than less.

Cops don’t worry when people see that they’re carrying a handgun. We expect it of them, in fact. That’s why cops so often prefer to carry the G17. Having a 1.26” wide grip is well worth the extra rounds, and their powerful mitts can accommodate the girth anyway.

If you open carry, you also don’t care whether people know that you’re armed. Or maybe you live somewhere cold enough to wear a jacket that conceals a larger handgun. In those cases you may prefer to carry a double stack pistol. It’s going to be heavier with so many more rounds inside of it, because the lead in those bullets really adds up. But having more rounds available could spell the difference in how an attack plays out.

If you do choose a single stack, you could carry additional mags with you so that you may reload. That added preparation wouldn’t necessarily compromise your concealment. If you do, make sure you practice mag changes. It’s not an easy trick to pick up while someone is attacking you.

Which is best for you?

To summarize, a single stack is preferable when discretion is key, or when the shooter has smaller hands. A double stack is better when you want to fire more shots in between reloads, and you can accommodate its greater size and weight.

Personally, we prefer the octuple stack magazine. Sure, our everyday carry weighs 20 pounds, and we can’t reach its trigger, but knowing that we could theoretically fire for two minutes straight is real peace of mind. Whichever type of mag you want in your everyday carry is entirely up to you.