“Oh, well he’s only that good at shooting because he has a fancy race gun.”

If you’ve been around the competitive shooting scene for a while, you’ve probably heard someone say something like that. Usually, it’s right after the person with the fancy “race gun” beat the brakes off someone at a stage or a standard. The person who lost is mad jelly. If you haven’t been around shooting for that long, you still might have heard the phrase race gun, perhaps even applied incorrectly to something like a Glock with a red dot milled into its slide. But what really makes a gun, any gun, a race gun?

What Separates A Race Gun from Others?

You could say that any gun used for the gun racing sports like Steel Challenge, USPSA, or IDPA is a “race gun”. You’re using it to race, and you’d be correct.

A key component in the scoring system for all three of these sports is time, so going faster than the guys and gals you’re trying to beat is important. But shooting your carry gun in a match doesn’t make it a race gun any more than putting your daily driver on a track makes it a race car. Real race guns are guns you purpose-build from the ground up to go fast.

The picture perfect racegun, what everyone thinks when they think those words, is a USPSA Open Gun.

What Is It Built For?

Just like a Formula 1 car is completely impractical in the real world, an Open Gun makes no sense outside the context of the sport it’s specifically designed for. Almost every gun for Open division looks incredibly similar: a 2011 double stack style frame, single action, chambered in 9mm Major or .38 Super/Comp, non-reciprocating red dot mounted to the frame, enormous magazine well, and big ol’ compensator on the front. To me, there is no more pure example of a race gun than the USPSA Open gun, because it was the “OG” of the category. It’s the first gun that was built for no other reason than to deliver fast, accurate hits on target.

But parts aren’t what make a race gun. It’s the spirit of it, what designers made it to do. While the Platonic Ideal may be a USPSA Open gun, you can consider any firearm one. Just like any car can be a race car. That Honda Accord that was just a daily commuter to you? Well you sold it to a 25 year old hoonigan who ripped out the back seats, put a roll cage in it, and added a racing suspension and slick tires. Now it is a race car, because he uses it for autocross events on weekends.

Just like that Glock 34 you picked up. You’re never going to carry it, because you (mistakenly) think it’s too big for carry. You got it to shoot IDPA and USPSA on the weekends, added better sights, a new trigger, and it only ever sees handloads or 9mm match ammo, and lives inside your competition holster. That’s a race gun, because all it ever does is race.

I will tell you what it isn’t because there is some confusion on it. Just because a gun has cool looking go-fast mods on it doesn’t make it a race gun.

You can have a Glock 19 with a compensator and a red dot mounted to it, but it’s not necessarily a race gun. If its primary purpose is to serve as your every day carry gun and you shoot it in matches occasionally, it doesn’t really fit into the category. It’s a carry gun. It’s a very fancy carry gun that wouldn’t exist if people hadn’t put racing parts on it; but it’s a carry gun.

Drawing another parallel from cars to guns – technology from racing often makes it way into cars we use for every day driving. I drove a Hybrid Ford Fusion the other day that had a regenerative braking system. That means it captures energy from braking and uses that to keep the batteries juiced up. You know where they developed that technology? Racing. Just like compensators and red dots on carry guns – technology that has made its way into the mainstream that was originally developed for go-fast parts.

It’s How You Use Them 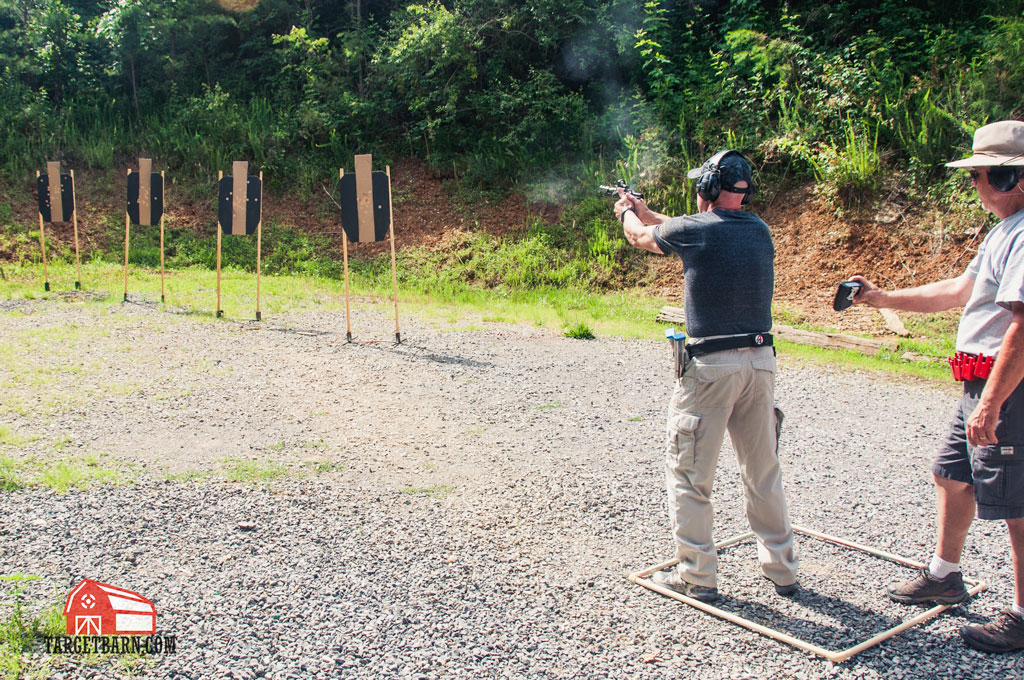 Really, what makes it a race gun isn’t the parts. It’s what you do with it that really matters. The first time you buy a firearm for no other reason than to shoot it in matches is the first time you’ve bought a real, honest to god, race gun. If you shoot matches long enough, you’ll find yourself eying those USPSA Open guns and thinking “maybe I should build a “real” race gun.” Regardless of whether you build an Open 2011 or buy a Tanfoglio Stock 2, just remember that the purpose of it is to go fast. And to paraphrase the great warrior-poet Shane Falco: “chicks dig guys who shoot fast.”