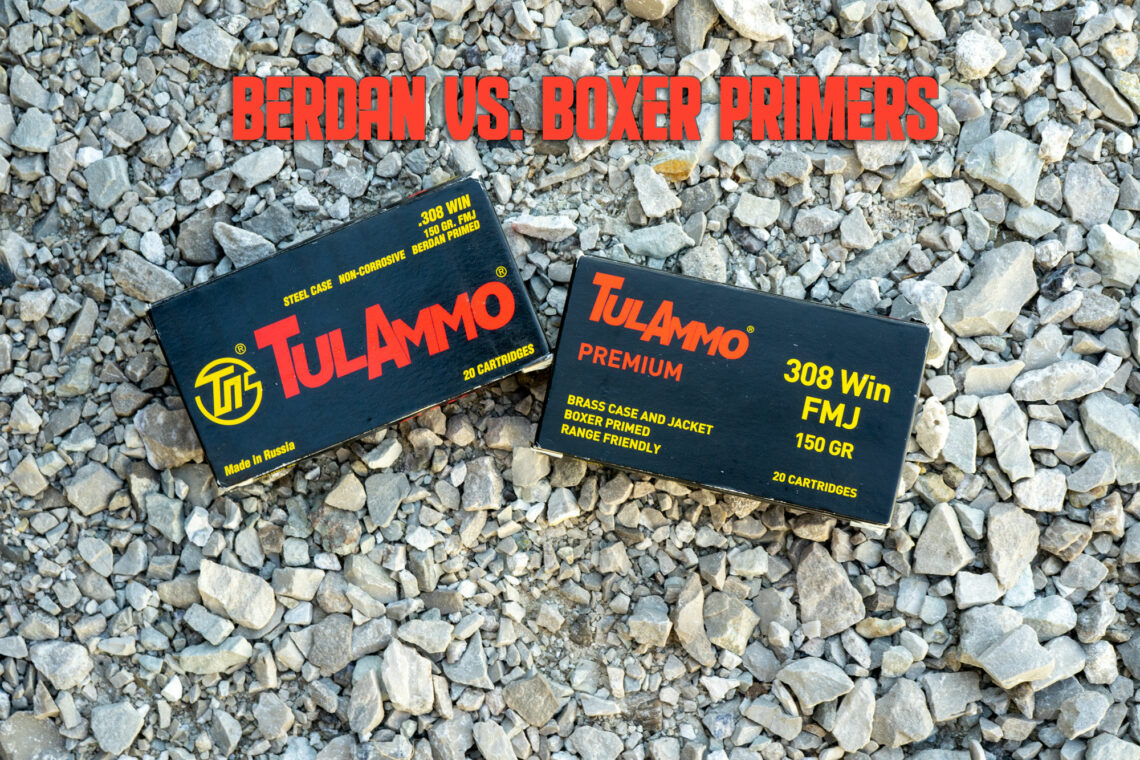 When it comes to ammo shopping, one question shooters may ask is about berdan vs. boxer primers: what’s the difference between the two and does it matter?

Every round of ammunition requires a component which converts the force of the firing pin into ignition which lights the propellant. This component is the primer. Two varieties of primers are common: rimfire and centerfire.

If a cartridge has a rimfire primer, then all other cartridges of its type must also have rimfire primers. In other words, you have no other option than to buy rimfire-primed .22LR. The rimfire primer is integral to the .22LR’s design.

This is not the case with centerfire primers, of which there are two common types: Berdan and Boxer. Any cartridge that has one type of centerfire primer could theoretically have the other.

Berdan vs. Boxer: How Does a Bullet Primer Work?

Before we go further, let’s briefly explain how primers work in general. A primer contains a pressure-sensitive explosive compound. When the firing pin strikes the primer, it crushes the priming compound until it explodes. When the priming power explodes, heat and sparks travel through the flash hole (or flash holes) to ignite the propellant.

The primer creates only a relatively small explosion. There are some extremely weak cartridges which rely solely on ignition of the primer to propel the bullet, but all of these are rimfire-primed rounds. In virtually all other cartridges, the primer’s job is to ignite the charge of propellant which sits just behind the bullet. This propels it down the barrel. 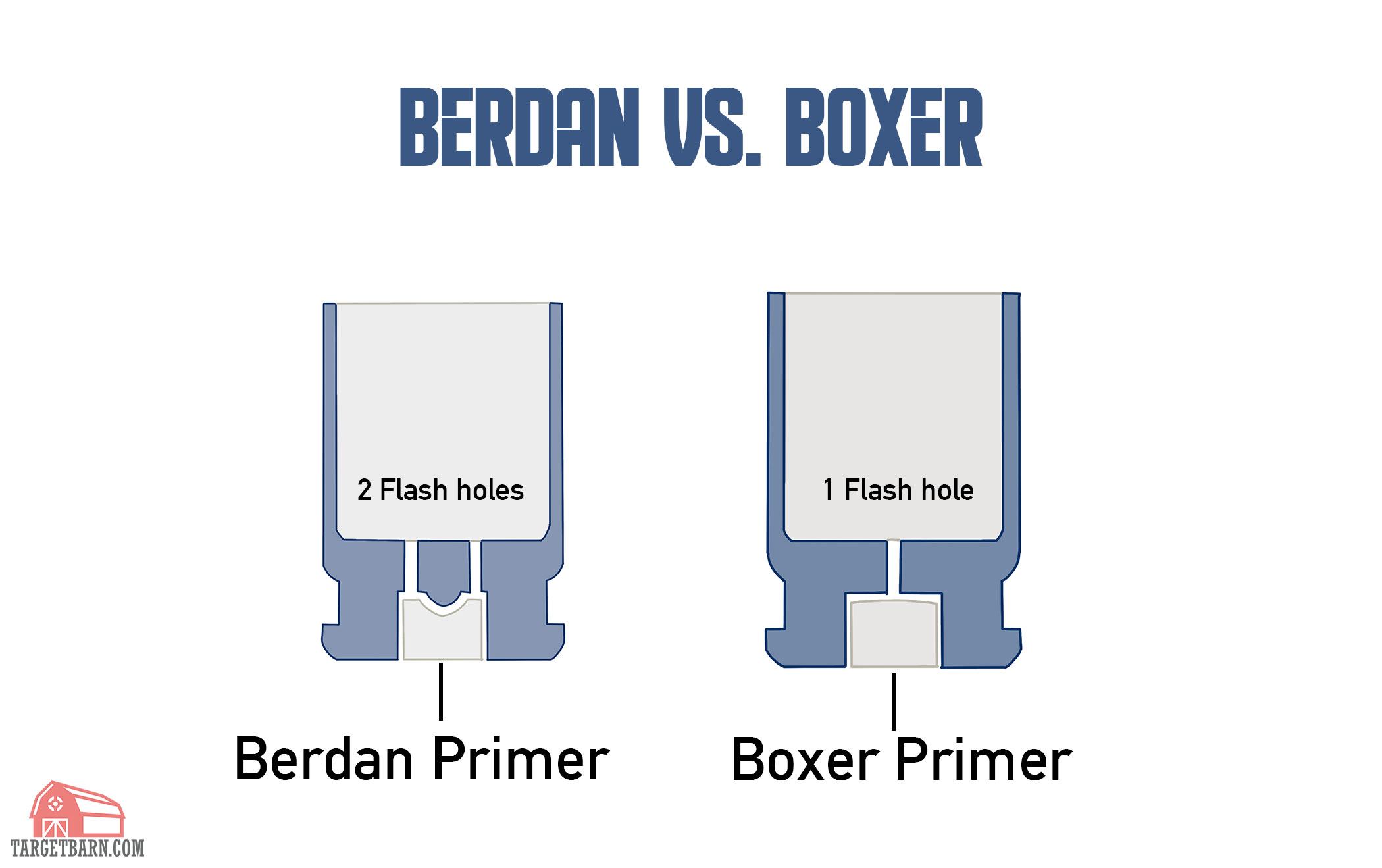 How Does a Boxer Primer Work?

A Boxer primer’s distinguishing feature is its integral anvil. The anvil provides the raised, hard surface against which the firing pin crushes the priming compound.

If you remove the Boxer primer from its shell casing, you would see a single, centrally located hole. This is the flash hole, and it lets the explosion of the priming compound access and ignite the propellant.

How Does a Berdan Primer Work?

In contrast to the Boxer primer, a Berdan primer lacks an integral anvil. The raised, hard surface against which the firing pin crushes the priming compound is actually part of the shell casing itself.

Remove a Berdan primer and you will see the case’s anvil. You will also see two flash holes instead of one, each drilled into the case on either side of the anvil.

Now that we know the basic difference between berdan vs. boxer primers, let’s look at the pros and cons of each.

● Reloadability – Boxer-primed ammo is the easiest to reload. There are two main reasons for this aside from the suppleness of brass. First, Boxer primer sizes are heavily standardized. Most rounds of Boxer-primed ammunition require either a small pistol, large pistol, small rifle or large rifle primer. (There are some exceptions, like the 50 BMG which requires its own dedicated primer.) Second, because the Boxer primer’s single flash hole is centrally located at the base of the shell casing, it requires no effort to correctly line up the two components while handloading.

● Cost – Brass is the best metal for shell casings, but the alloy is about 60% copper. Copper is known as a “semi-precious” metal for good reason: It is relatively expensive, so brass-cased ammo tends to cost significantly more than steel-cased or aluminum-cased alternatives.

● Manufacturing Defects – Boxer primers occasionally leave their manufacturers with defects that compromise their performance, such as a misplaced anvil. Such manufacturing defects are exceedingly rare, however, and they are not exclusive to Boxer primes by any measure. In fact, Boxer-primed ammo is nearly always more reliable than Berdan-primed alternatives!

● Affordability – Berdan primers cost less to manufacture than Boxer primers. The difference is slight and might not be obvious. Berdan-primed ammo is usually significantly cheaper because it is also steel-cased. Regardless, you do wind up paying less for primers when you opt for Berdan-primed ammo over Boxer-primed alternatives.

● Safety – Berdan primers are slightly less sensitive to slamfiring than Boxer primers. They are seated just beneath the surface of the case instead of flush with it, so a free-floating firing pin has a lower chance of accidentally igniting a Berdan primer when the firearm is dropped or otherwise violently jostled.

● Performance and Reliability – Steel cases are cheaper than brass ones, but they pose two major disadvantages in terms of performance. First, steel is more rigid than brass, so steel cases are less effective at sealing the chamber during ignition. This means more propellant residue can enter the action, which in turn leads to accelerated fouling of the firearm. Second, shooters often have more failures to feed and extract with steel cases over brass. In general, steel cased ammo performs less reliably than brass cased ammo.

● Reloadability – Rigid steel cases do not return to their original dimensions following ignition. Reloaders must manually resize them before reloading them, which is time-consuming. Furthermore, a Berdan-primed steel case’s anvil gets worn down when it is struck by the firing pin, which is fiendishly difficult damage to undo.

The Berdan primer itself poses two major hurtles to handloaders. First, Berdan primer sizes are not nearly as standardized as Boxer primers. Getting the correct size of Berdan primer for a given round of ammunition can be difficult (especially since component Berdan primers themselves are rare). Second, correctly lining up a Berdan primer with its two flash holes is tricky – and a step you don’t have to worry about at all while you’re reloading Boxer-primed ammunition.

● Corrosiveness – Modern Berdan-primed ammo is uniformly non-corrosive. Shooters often assume that Berdan-primed ammo is corrosive because they are accustomed to old Soviet era military surplus, which is indeed loaded with obsolete corrosive primers that will cause rust without special cleaning after firing. Old Boxer-primed military surplus ammo may be corrosive as well, but corrosion simply isn’t something you have to worry about when the ammo has been recently produced for the commercial market.

Berdan vs. Boxer Primers: The Takeaway

So, what’s the takeaway in the berdan vs. boxer primers debate? Well, it depends.

It is not impossible to reload Berdan-primed ammunition. However, the process is complicated and inefficient. It would only be worth undertaking if there were quite literally no other way to obtain ammunition. If your name is Sergey Ivanov, and you are living in a Moscow subway tunnel following an apocalyptic nuclear war, and you desperately need ammo to fight off giant mutant rats, then reloading steel-cased ammo would be worth your while. Otherwise, don’t bother.

The primary advantage to Boxer-primed ammo is therefore its reloadability. If you have no intention of reloading your ammo, then you may still prefer Boxer-primed ammo. That’s because brass cases generally promote cleaner and more reliable performance. But if you would rather save as much money on ammo as you’re able, and you don’t mind spending more time cleaning your firearm and potentially clearing jams, then Berdan-primed ammo has much to offer.