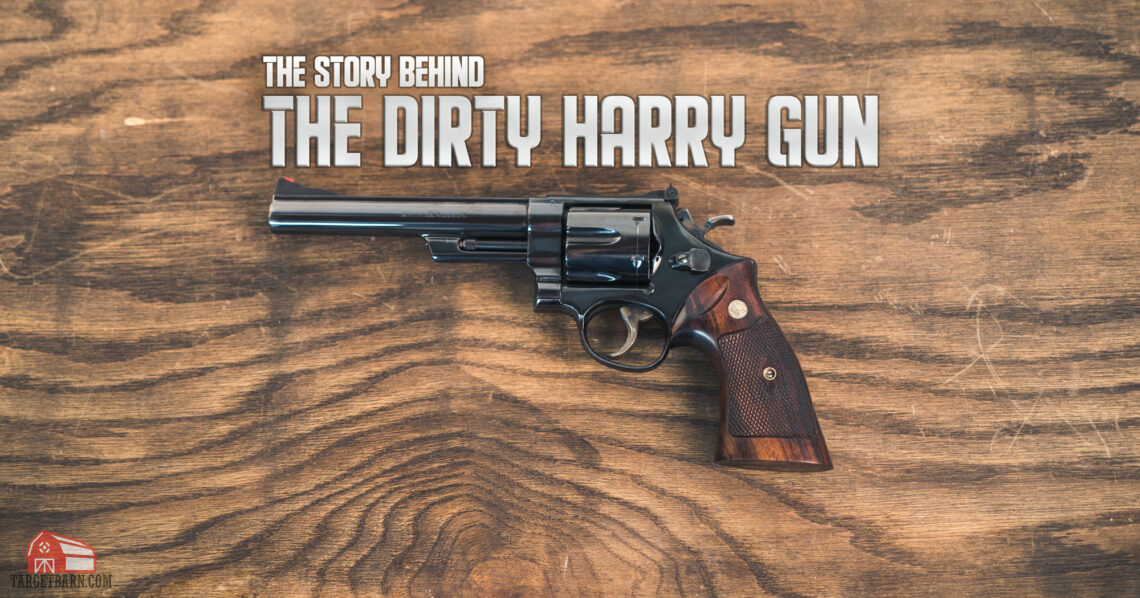 I​f you made a list of the most iconic movie guns of all time, what would be on it? If we rule out sci-fi weapons like Han Solo’s blaster and confine our choices to real guns, it’s hard to make an argument that the Dirty Harry gun, the famous 6.5 inch Smith & Wesson Model 29, isn’t the most famous movie gun of all time.

“​The most powerful handgun in the world” almost didn’t exist, though. Had it not been for Clint Eastwood’s famous Inspector Callahan, the legendary .44 Magnum revolver might have been discontinued. Before it was the Dirty Harry Gun, the S&W Model 29 wasn’t a sales success for S&W. But, this isn’t just the story of a movie gun, it’s one of the greatest stories in firearms development history.

Elmer Keith and the 44 Magnum Cartridge

T​his story begins with a legend himself, Elmer Keith. If you’re reading this because you googled “Dirty Harry’s Gun,” tell Siri to remind you to Google Elmer Keith next. You’ll thank me later.

Keith was a legendary gun writer, and an avid handloader. In the late 1940s and 1950s, he had begun experimenting with increasing the power of the .44 Special load. He wanted to make it more suitable for medium game. In a story worth of its own article, he developed a load for the .44 Special that equaled the early .44 Magnum loads. Then he convinced Remington to actually manufacture it. To prevent people from accidentally loading the new, high pressure round into a .44 Special revolver, the case was lengthened. This made it impossible to load the .44 Magnum round in anything but a .44 Magnum chamber.

The Development of the Smith & Wesson Model 29

Keith was also a fan of Smith & Wesson revolvers, particularly their New Century, or Triple Lock revolver, which was chambered in .44 Special. As part of convincing Remington to manufacture the new round, he also convinced S&W to partner with Remington and design a new revolver for the potent magnum round. S&W took their largest frame size, the N-frame, made a couple of tweaks here and there, and in 1956 the Model 29 was born.

I​t was not a hit. Elmer Keith and other gun writers of his era absolutely loved the gun. Pro hunters used it to take everything that walks on 4 legs in North America. Despite this, the general sales results were lackluster, confined to a small market of serious handgun hunting enthusiasts. In fact, when Dirty Harry hit theaters in 1971, S&W had stopped regular production of the Model 29, only making small batches when the existing supply was exhausted.

How did Dirty Harry End Up With the Model 29?

S​o how did Dirty Harry’s gun end up in his hands? The answer is in the screenwriter. Although originally uncredited, it’s now widely known that John Milius was the principle screenwriter for the first Dirty Harry movie. His name might sound familiar. That’s because, among Milius’s other Hollywood credits, is the timeless classic 80s teen movie: Red Dawn.

Milius is a serious firearms enthusiast, and was looking for his Inspector Callahan to carry something with a little more panache than the standard issue .38 Special revolvers of the time. The original draft of the script called for a 4-inch Model 29 with a nickel finish. It certainly would have been striking. However, because the Model 29 was in minimal production, a 4-inch nickel finished gun was impossible to get. Eventually, with input from both Milius and Clint Eastwood, production settled on the 6.5 inch Model 29-2. And a legend was born.

“The Most Powerful Handgun in the World” Gains Popularity

Demand for Dirty Harry’s Gun went through the roof. Smith & Wesson couldn’t make the gun fast enough to keep up with demand after the first movie came out, and subsequent sequels would also drive sales spikes. The guns were so hard to find that any 44 Magnum would sell. If you couldn’t find a S&W, a Ruger Blackhawk (introduced in the same year as the Model 29) would do just fine, because it was also “the most powerful handgun in the world.” An oft-repeated legend is that in the days before constant streaming on demand, Dirty Harry re-run marathons on TV would drive purchase increases for the Model 29.

Where to Buy Dirty Harry’s Gun

While demand for the Model 29 has tapered off in modern times, it still sells. S&W brought it back as part of their reintroduction of their “classic” models, which introduce some of their classic designs but take advantage of more modern machining techniques. If you want the original item, a 6.5 inch 29-2, you can still get them.

As of this writing, there’s one on Gunbroker for $3,000. S&W also sells quite a few different models of the 629, which is the stainless steel version of the 44 Magnum revolver. But if you want the “most powerful” production handgun in the world, you’re going to have to look elsewhere in Smith’s catalog.

The current king is also a S&W revolver, and a movie darling as well: the enormous 500 Magnum. The new king may be the biggest on the block, but it hasn’t yet proved to be a timeless classic like the Dirty Harry gun, the legendary Smith & Wesson Model 29.