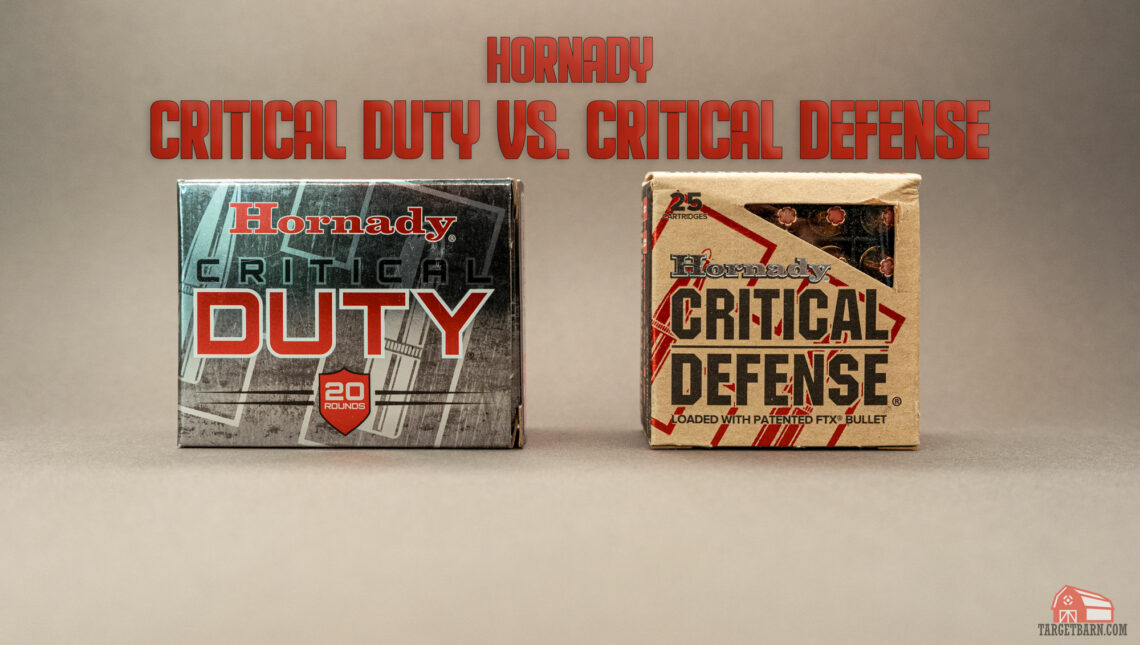 J.W. Hornady’s goal for his company’s ammunition was always the same: “Ten bullets in the same hole.” But accuracy alone doesn’t make a great self-defense cartridge. That’s why Hornady engineered both its Critical Duty and Critical Defense lines of ammo to deliver the commanding terminal ballistics which neutralize a threat quickly.

Even experienced shooters are often unaware of the differences between Critical Duty and Critical Defense ammunition. In truth they are slight. You would be just as wise to load one type of Hornady’s personal protection ammo in your everyday carry pistol’s magazine as you would the other.

But you want to know exactly what kind of heat you’re packing, which is why you care to understand the differences between Hornady Critical Duty vs. Critical Defense. Ultimately, those differences all boil down to the two bullets Hornady loaded them with.

Critical Duty: Loaded with the FlexLock Bullet for Law Enforcement

A Critical Duty cartridge’s distinguishing feature is its FlexLock bullet. It is a jacketed hollow point, with a high-antimony lead-alloy core for added hardness and a thick copper shell.

The FlexLock is even more resilient courtesy of its InterLock band. It prevents core/jacket separation during penetration of all FBI barriers including sheet metal, drywall, and auto glass. This helps the FlexLock effectively neutralize a threat that has taken cover. It also penetrates said threat deeply enough to access their vital organs.

The FlexLock contains a Flex Tip polymer plug in its hollow point nose cavity. The Flex Tip polymer plug prevents debris from getting lodged within the FlexLock’s nose cavity. This preserves the bullet’s ability to deliver terminal expansion even if it must first pierce a barrier before reaching its target. The Flex Tip additionally presses inward during impact and subsequent penetration to yield more reliable expansion.

The FlexLock’s exemplary performance according to the FBI test protocol suits it very well for law enforcement applications. Law enforcement officers know that they may have to engage threats which are shielded by vehicle doors, windshields and walls. If you carry a full-size pistol and wish to count on the same kind of barrier-blind performance cops would entrust their safety to, then Hornady Critical Duty will have your back.

Critical Defense: Loaded with the FTX Bullet for Civilians

Make no mistake: Civilians are allowed to purchase and utilize police-grade ammunition (with important exceptions, such as New Jersey where it is illegal to carry hollow point ammunition except under certain special circumstances; check your state and local laws before selecting your self-defense ammunition). But civilians who appreciate that they probably will not need top-shelf JHP ammo which can neutralize threats through sheet metal and other durable barriers often prefer slightly less highly-engineered bullets.

That’s why Hornady loaded Critical Defense ammo with their Flex Tip eXpanding (FTX) projectiles. The FTX still possesses a high-antimony lead core, although its copper jacket is thinner in places. The FTX’s InterLock ring may not secure the same degree of weight retention as the FlexLock’s InterLock band. That said, the InterLock ring does reliably anchor its core and jacket together. This prevents the component separation which sheds momentum during penetration of thick clothing and soft tissue.

Like the FlexLock, the FTX sports a Flex Tip that protects its nose cavity from gumming up with debris. Both bullets also showcase Hornady’s characteristically concentric jackets and uniformly distributed lead cores. The Nebraskan manufacturer’s high-quality bullets consistently exhibit the flat, accurate trajectories which make aiming under stress just a little bit easier.

We also found that the Critical Defense bullets had more expansion after being shot through ballistic gel than the Critical Duty. Adequate expansion is important because it results in a bigger wound cavity. Successful expansion is often considered 1.5 times the original diameter of the bullet.

Hornady loads both Critical Duty and Critical Defense cartridges with low-flash powder as well. This propellant is formulated to emit significantly duller light during ignition. That helps prevent the shooter’s eyes from adjusting out of natural night vision mode. This in turn conserves their ability to see their target while they are firing follow-up shots in a dark environment.

So, what’s the takeaway in the Critical Duty vs. Critical Defense debate?

To reiterate: Critical Duty and Critical Defense ammunition are both stellar choices for personal protection. Whether you should prefer one over the other ultimately depends on the type of terminal ballistics you prefer.

If you anticipate having to neutralize a threat that has taken cover, then the extra money you spend on Critical Duty’s FlexLock bullets can pay off greatly. But if you are less concerned about shooting through barriers than you are about saving money, Critical Defense’s FTX bullets will still serve you well when your back’s against the wall.