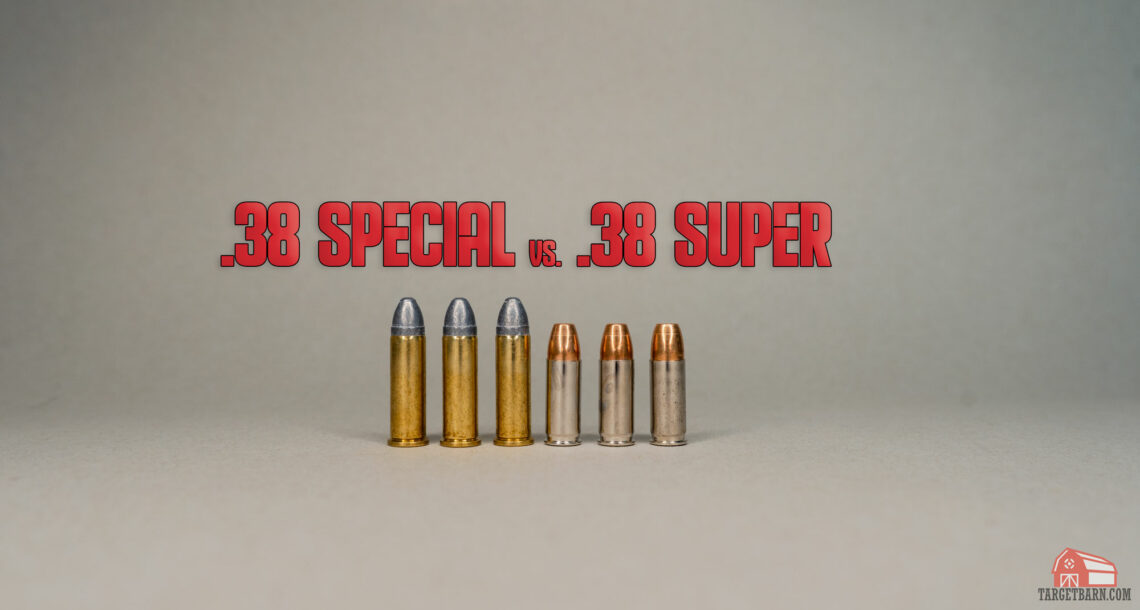 It’s not uncommon that we see new shooters mixing up calibers when shopping for ammo. One of the biggest mix-ups we see, though, is .38 Special vs. .38 Super. If we could go back in time, we’d visit the Founding Fathers and make a case for writing the Second Amendment a whole lot less ambiguously. But before we returned to the current miserable decade, we’d make a pit stop at Colt’s factory in 1929 to tell them this: Do NOT name your newest cartridge “.38 Super!” 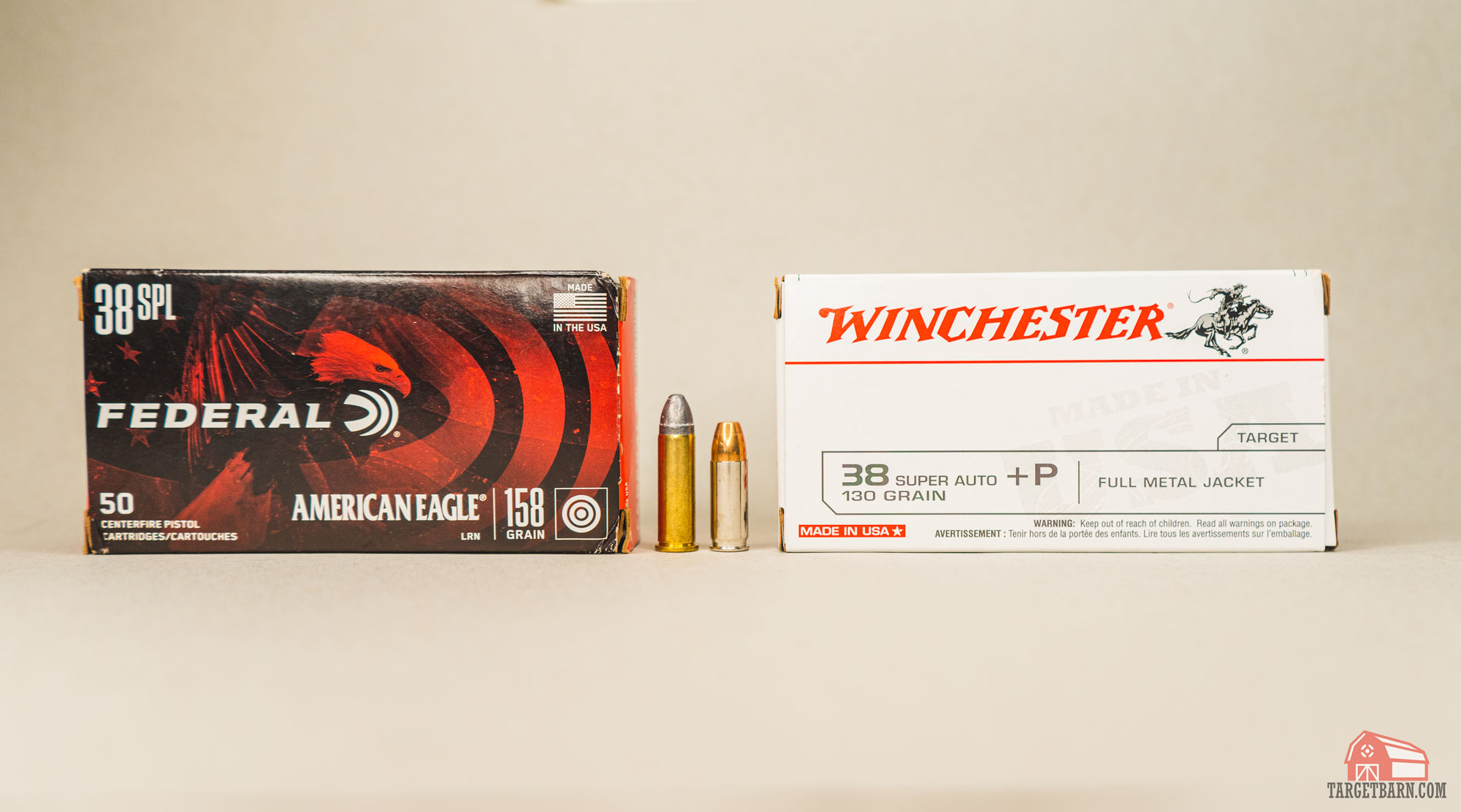 The .38 Super, which is also known as the .38 Super Auto or .38 Super +P, is often assumed to be the same thing as the .38 Special. Fair enough. “Special” and “Super” can both describe similar concepts. But these rounds are in fact extremely different from one another. Not only are they not interchangeable – they are designed for altogether different types of firearms. The .38 Super is a semi-auto round, whereas the .38 Special is designed specifically for revolvers!

No, you cannot. As we said before, the .38 Super and .38 Special are two separate rounds and are not interchangeable.

History of the .38 Special 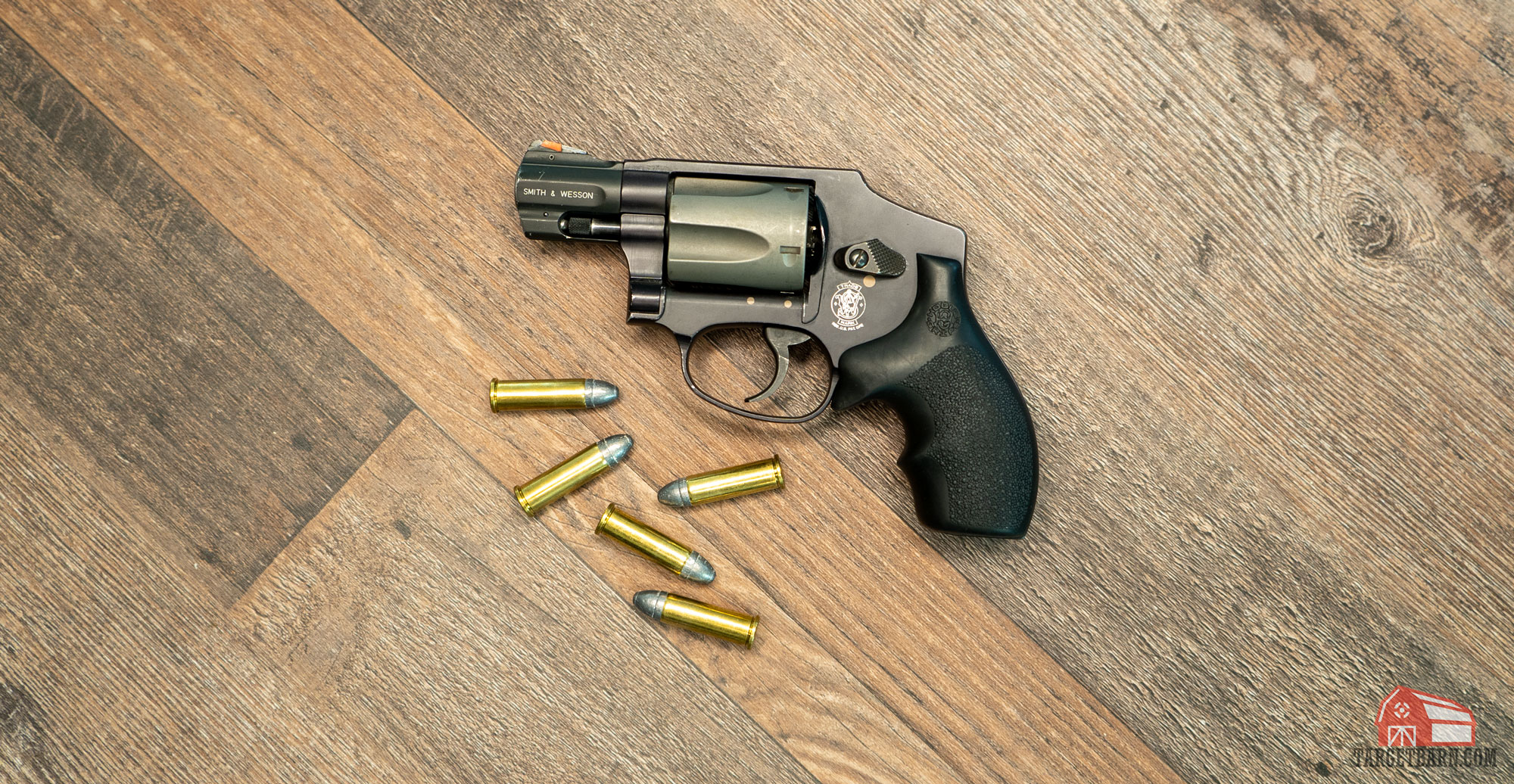 The .38 Special was developed for the U.S. military at the end of the 19th century. The classic revolver round no longer serves an official purpose. Though, a police officer may use it as a backup if they so please. Yet it remains popular for target shooting and self-defense. That’s because of its manageable recoil and the compact revolvers that are chambered for it. The .38 Special is not a very powerful round by any reasonable measure. However, it does deliver sufficient energy for personal protection under the proper conditions.

History of the .38 Super

The .38 Super is a derivative of the 38 Automatic Colt Pistol (ACP). It often has “+P” added to the end of its name, although it is not in fact an overpressure cartridge. Ammo manufacturers just want to further distinguish .38 Super from .38 ACP, as the newer, more powerful round shares identical dimensions with its predecessor. You do not want to load .38 Super in a .38 ACP handgun, however, as it will destroy it and potentially injure you!

The .38 Super was specifically created for the M1911. Because it was introduced to the market three decades after the .38 Special, its developers were able to incorporate more modern propellant into its design (thus packing more “boom” into a less voluminous case).

The .38 Super didn’t become very popular, as the arrival of the .357 Magnum in 1935 led police departments to adopt revolvers chambered for the powerful derivative of the .38 Special – handguns which they often (and justifiably) placed more faith in than semi-automatics. More recently the .38 Super has experienced something of a renaissance, as competitive shooters increasingly favor the accurate 1911 cartridge.

But enough mucking around in history. Once you have appreciated that .38 Special will not work in .38 Super handguns – and vice versa – you may naturally wonder just how differently the two rounds compare in terms of ballistics, stopping power, recoil and availability. Keep reading, our super special friend!

Right off the bat you should notice that these rounds have practically identical bullets. They often share the same bullet weights as well, with 130 grains being a popular load for both .38 Special and .38 Super cartridges.

It’s interesting to note that the .38 Special’s case has approximately one-third more capacity. This is because the older round was originally loaded with black powder. Black powder was comparatively less potent than the modern smokeless propellant used nowadays. Modern .38 Special ammo is loaded with modern powder, but its case remains much larger than what is needed to accommodate it.

In contrast, the newer .38 Super is a more compact cartridge. It may be smaller and lighter, yet it’s able to generate about twice as much chamber pressure as the .38 Special! Based on these specs alone, we can reasonably assume the .38 Super to be a significantly more powerful round.

One more thing. The .38 Special has a rimmed case, which is the hallmark of a revolver round, whereas the .38 Super’s rimless case indicates that it’s a semi-auto round. There are in fact semi-automatic .38 Special pistols, but they are uncommon. In other words, any argument you could make in favor of the .38 Special’s superiority would assume that you’re okay committing to a revolver.

It’s difficult to compare the ballistic performance of two different types of ammo. Manufacturers may also use varying test barrel lengths. This complicates things as a longer barrel generally confers an accordingly higher muzzle velocity. We did our best to give you some apples-to-apples ballistic performance comparisons. However, please bear in mind our data do not offer a 100% clear picture.

Yet the .38 Super demonstrates its superior ballistics all the same. When both rounds have the same bullets, the .38 Super achieves a significantly higher muzzle velocity. This promotes a flatter trajectory, helping shooters hit their targets without having to take bullet drop into account as heavily. The .38 Super’s popularity for International Practical Shooting Confederation competitions is no coincidence – this is an accurate round!

The .38 Special and .38 Super are both pistol rounds, of course, which most people will use to shoot short-range targets. To that end, either round offers acceptable accuracy within any practical range for self-defense.

“Stopping power” encompasses several aspects of a cartridge’s terminal performance, including sectional density and bullet diameter. Sectional density determines how efficiently a bullet can penetrate soft tissue. Bullet diameter affects wound channel width. Both of these determine how effectively a round can neutralize a threat.

But the .38 Special and .38 Super can share essentially identical sectional densities and bullet diameters. We’re thus able to focus on the most significant aspect of the two rounds’ stopping power: energy delivery on impact.

We cannot say how much recoil you’ll actually feel when you fire a handgun. That’s purely subjective. But we can measure how much objective recoil energy a cartridge will generate. We do this by considering four factors: muzzle velocity, bullet weight, powder weight and firearm weight.

We already have bullet weights and muzzle velocities for the six rounds compared earlier. Keep in mind that our data are not perfectly analogous. But let’s compare their recoil energy anyway, with the assumption that all 38 Super rounds have 8 grains of powder and all .38 Special rounds have 5 grains. For this comparison we’re firing a 37.5 oz .38 Super Colt 1911 and a 37.2 oz .357 Magnum S&W M19.

Importantly, neither round delivers an uncomfortable amount of kick. But the .38 Super does generate about twice as much recoil energy, which means you can reasonably expect it to kick harder and produce more muzzle flip (which will increase the amount of time you have to spend restoring your aim in between firing each shot).

Note that we chose two handguns with essentially the same weight for our recoil comparison. Had we chosen a subcompact .38 Special revolver, such as the 14.4 oz S&W M642, then the weaker .38 Special rounds would actually have generated more recoil energy than any 38 Super. This nicely demonstrates the effect that firearm weight has on performance!

The .38 Special is one of the most popular revolver cartridges on the market. .38 Special ammunition and firearms chambered for it are both common and relatively affordable.

.38 Super firearms aren’t excessively difficult to find, but .38 Super ammo itself isn’t all that common. You’ll be lucky to find any at a sporting goods store. Even online retailers aren’t likely to offer a wide selection of .38 Super.

In other words, you’ll have a much easier time finding the ammo you need for regular target practice if you opt in favor of the .38 Special. Better yet, if you buy a .357 Magnum revolver you will be able to fire the more powerful round in addition to the cheaper, weaker .38 Special! 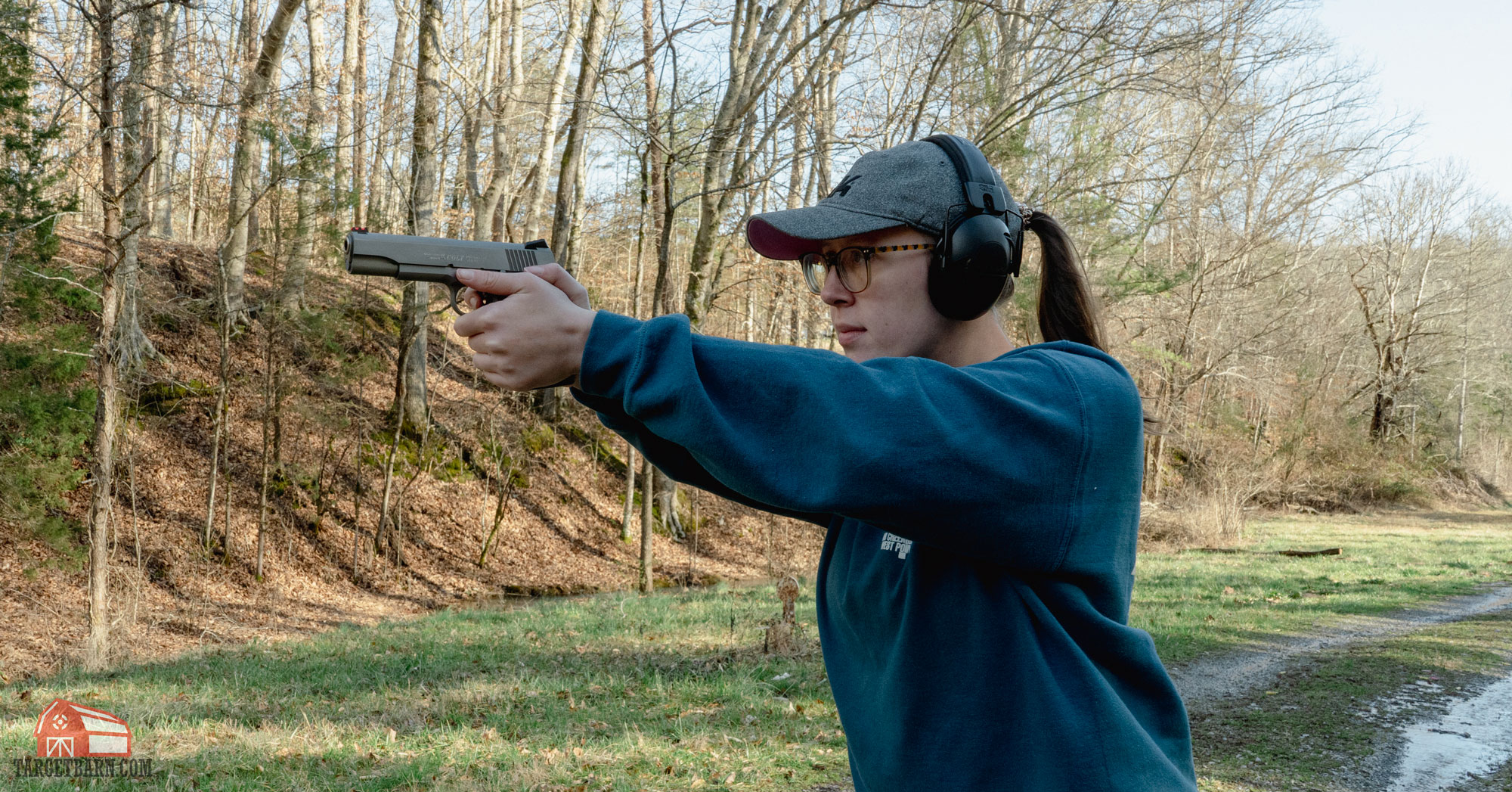 .38 Special and .38 Super are not the same cartridge. The revolver round delivers poorer accuracy and lesser stopping power. It also has more recoil if you fire it out of a lightweight subcompact handgun. But the .38 Special has remained popular for over a century because it does indeed do its job, and revolvers are inherently reliable firearms.

The .38 Super is great if you want to do some precision shooting with a 1911. But as a competition shooter’s semi-auto round, the .38 Super is really only suited for self-defense if you have already familiarized yourself with its performance and are committed to carrying a 1911 pistol around with you. The .38 Super’s great accuracy, ample stopping power and semi-auto platform all make it a perfectly acceptable solution for personal protection, but it’s still something of a niche cartridge.

If you want to avoid frustration while you’re shopping for ammo, then you would do well to favor the .38 Special over the 38 Super – or better yet, pick a more popular semi-auto pistol round like the 9mm, .40 S&W or .45 ACP!