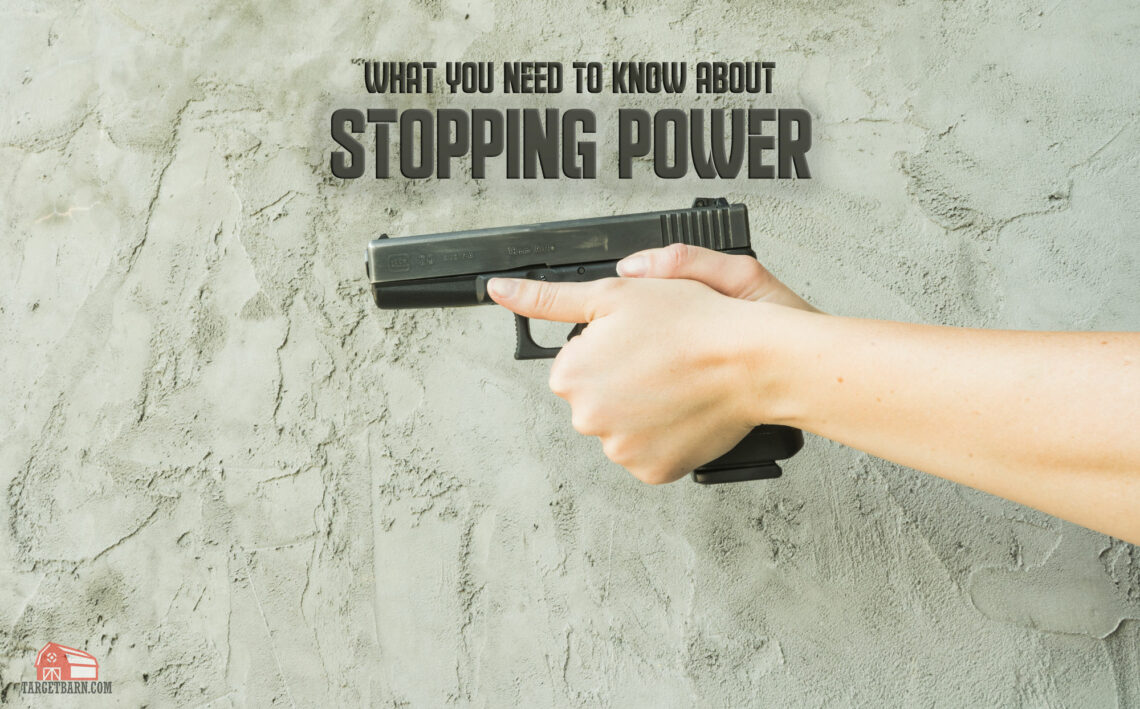 Stopping Power – What You Need to Know

“Stopping power” is one of the most bandied around phrases in the corners of the gun internet. Rarely do you see it used in a context that makes any kind of sense. It often has other garbage terms attached to it, like “hydrostatic shock” or “energy dump.”

Here’s the definition that makes the most sense: stopping power is the measure of a given cartridge’s ability to incapacitate the target.

Unfortunately, that’s as clear as this is going to get, so get ready. We’re going to get complicated.

It’s natural that we’d want some way to quantify how effective a weapon system is at stopping whatever we’re shooting at. That’s the entire point of guns – there is a thing doing something you don’t want it to do, and you need to stop it from doing that thing. Whether it’s a deer that you’d like to stop from living so you can eat it, or a person with a knife you’d like to stop from stabbing you in the chest, the point of firing a gun at a living thing is to make it stop doing whatever it’s doing at the moment. Because making those things stop can be a matter of life and death, wanting to be able to measure stopping power is a natural desire. 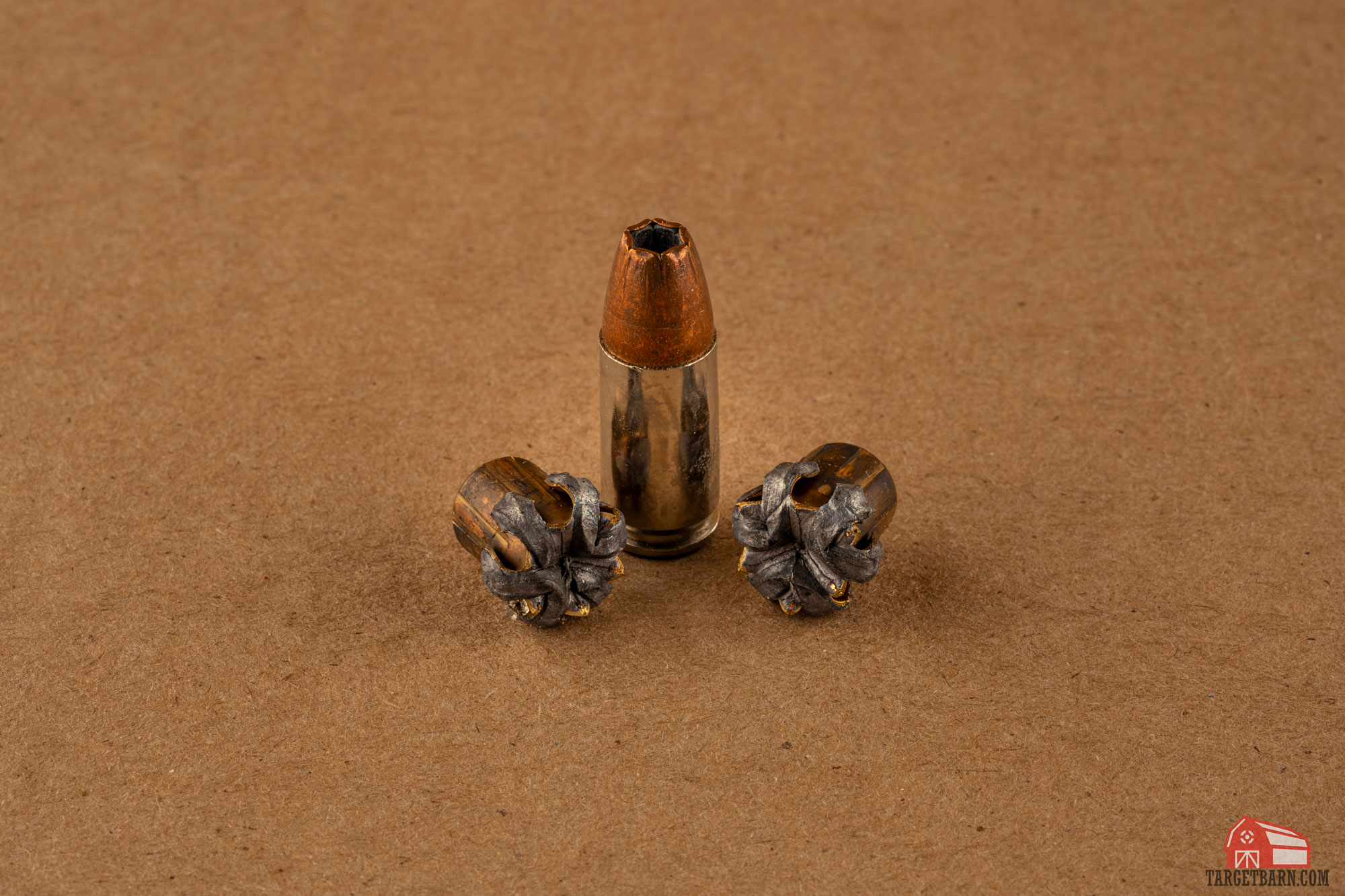 Stopping power is incredibly hard to measure for many reasons. Since stopping power is most often discussed in the context of self defense against humans, that’s the criteria we’ll use here.

A physiological stop happens because projectiles damage major blood bearing organs and sufficiently disrupt the flow of oxygenated blood. This causes unconsciousness and eventually death. This stop also occurs when projectiles damage the body’s central nervous system, like direct hits to the spine or important parts of the brain.

Psychological stops happen when someone realizes they’ve been shot and decide they don’t want to get shot more. They stop doing whatever caused them to get shot in the first place.

It gets even more complicated when you understand projectile wounding mechanics.

Rifles have two wounding mechanisms. This first is by disrupting tissue with direct impact from the projectile. The secondary wounding is via shock to surrounding organs from the bullet passing through.

Handguns have one wounding mechanism, which is direct damage to tissue from getting hit by a bullet.

Shotguns wound like handguns, except it’s like shooting someone with a handgun 8 times simultaneously. In fact, in all my studies of civilian self defense shootings, I’ve never been able to find a time when someone who was shot with a 12 gauge firing 00 buckshot needed to be shot more than once. Shotguns work great, but only with buckshot or slugs.

Wounding Mechanics: How to Stop a Threat

Let’s talk about wounding mechanics for a second.

Rifle bullets are going so fast that when they hit tissue, they cause the tissue surrounding the impact point to stretch and actually tear. This is the secondary wounding mechanism discussed above. This gives a rifle bullet the ability to disrupt more tissue than what it touches, which makes them more effective at stopping people than handguns. That’s because as mentioned above, a handgun doesn’t have this ability. A handgun bullet only damages tissue it touches.

Now that we understand wounding mechanics, we can get deeper with this conversation. We know that there are two ways that people get stopped. Psychological stops aren’t reliable, since a lot of time people won’t even realize they’re shot. That means our only reliable mechanism of stopping someone is to cause rapid blood loss or damage the central nervous system. Anyone who’s hunted understands why rapid blood loss is important. That’s why hunters all love the “lung-heart” shot on a game animal.

In self defense situations against people, you want to target the high center chest to cause rapid blood loss. That area is about the size of a four-inch circle. In this little golden area lies bits of the heart and the aortic arch — aka the best way to cause rapid blood loss. A bullet that hits this area also has a chance to hit the spine, which is about two inches wide and way in the back of everything. A shot to the cranial vault targets the area that runs from the brow ridge to the tip of the nose. It’s about 4 inches wide and 3 inches tall. Handgun bullets that hit outside these small target areas are not likely to cause rapid incapacitation.

There’s a reason I went to great lengths to show all that. It’s because the most important aspect of stopping power has nothing to do with caliber, muzzle velocity, or kinetic energy. It’s shot placement.

It doesn’t matter what death ray you’re using. If the bullet doesn’t hit those vital structures it won’t reliably stop an attacker. The first and most important criteria of stopping power is penetration. A bullet must reliably penetrate deep enough to reach those vital structures like the heart, spine, or aortic arch. It must do that after going through clothes, tissue, and bone.

This is where the FBI’s standards come from. No, people aren’t made from jell-o. There’s a reason the FBI standard of 12-16 inches of penetration in calibrated gel exists. It’s because the FBI’s testing and studies showed that bullets meeting that standard would reliably penetrate deep enough in human tissue to reach vital bits of anatomy.

This is why birdshot and gimmick rounds like RIP aren’t good for self defense. The lightweight projectiles don’t penetrate deep enough to cause major damage. That’s why shotguns use buckshot or slugs, and pistols should use quality JHP.

Which brings us to the next important factor for stopping power: expansion/tissue disruption. We’ll remove rifles from the equation for the moment and focus on pistols.

Once we have a bullet that penetrates deep enough to damage important things, it would be nice if that bullet made a bigger hole, right? This is where expansion comes into play. Since handgun bullets can only damage tissue by touching it, if we can make the hole bigger we definitely should. But remember that expansion is secondary to penetration. That’s because a bullet that expands a ton but doesn’t go deep enough to damage those important structures isn’t doing what you need it to do.

To put a bow on all of this, the phrase “stopping power” is deeply misunderstood by most gun owners. A firearm’s stopping power isn’t defined by things like energy dump or hydrostatic shock. It’s defined by how effectively those projectiles can reach the major blood bearing organs or central nervous system of a threat and destroy it.

Remember this: shot placement is king, penetration is queen, and everything else is nice to have if you can get it. Oh and shotguns with 00 buckshot will ruin your day.