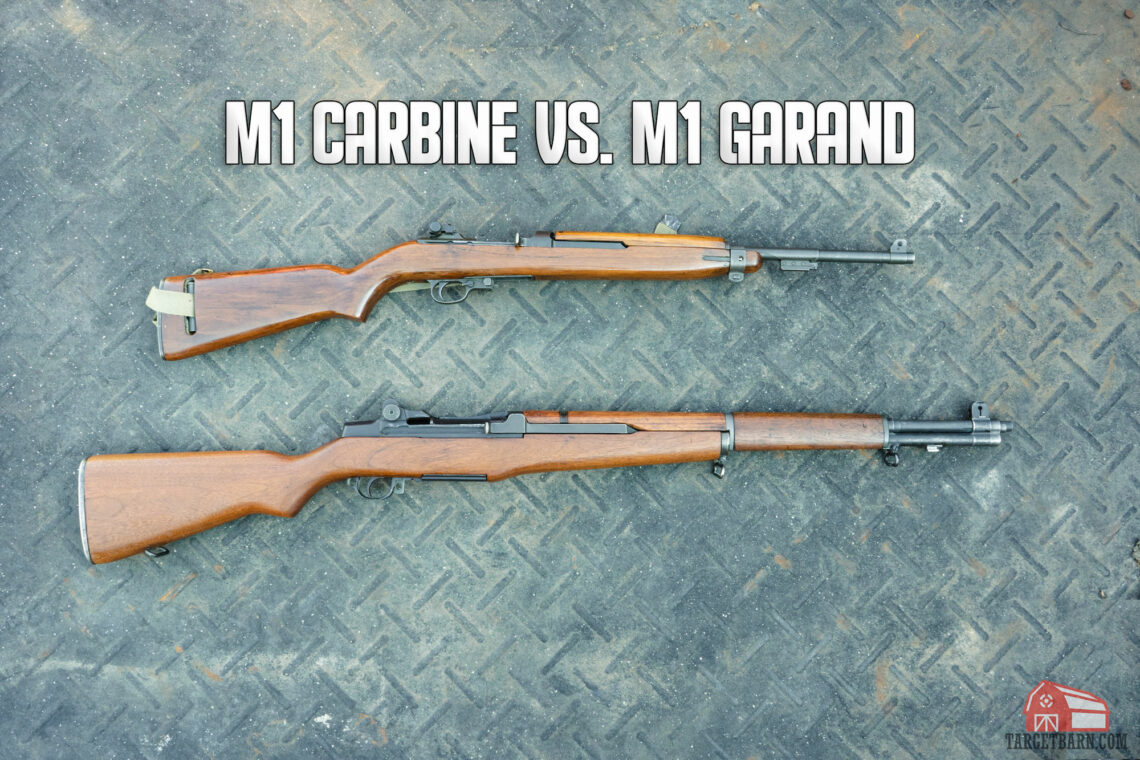 To seasoned gun enthusiasts, the differences between the M1 Carbine vs. M1 Garand are probably obvious. However, newer shooters may think these two legendary World War II rifles are related due to their similar names and looks.

Today we are clearing up any confusion for those that may think the M1 Carbine is simply the younger sibling to the M1 Garand. Keep reading to learn about the M1 Carbine vs. M1 Garand and their differences.

The M1 Carbine and M1 Garand are both rifles that the U.S. used in World War II and later wars. While their names are similar and may look somewhat alike due to their wood furniture, they are two completely different rifles that serve different purposes.

One might wonder why the M1 Carbine and M1 Garand have such similar names if they’re not different versions of each other. That’s because of the U.S. Army’s current naming convention that began in 1925. The “M” is for “Model” and the number is the number following is the order in which they were developed. So, the M1 Carbine was the first carbine developed under the system. The M1 Garand’s official designation is U.S. rifle, caliber .30, M1. It is also known as the M1 Rifle, and takes the name M1 Garand after its designer, John Garand.

First, let’s look at caliber. Both rifles fire the .30 caliber round, which creates a little confusion.

The M1 Carbine is a light semi-automatic carbine, chambered in .30 Carbine with a 15-round and 30-round magazines. It features a gas-operated rotating bolt, and is a light carbine at a little over 5 pounds.

The .30 Carbine round is a light rifle round that Winchester designed specifically for the M1 Carbine. It is a rimless, .30 caliber version of the .32 Winchester Self-Loading cartridge. Using a 110 grain bullet, it offers similar ballistic performance to the .357 Magnum and is sometimes described as an “anemic” caliber. The .30 Carbine is considered a light rifle round and not comparable to intermediate rifle rounds of today. It has an effective firing range of 300 yards and a muzzle velocity of 1,990 fps out of the M1 Carbine.

The M1 Garand is a semi-automatic rifle with a gas-operated rotating bolt. It is chambered in .30-06 Springfield and takes eight-round en bloc clips that the shooter loads through the top of the receiver. It’s a heavy gun, at nearly 10 pounds.

The .30-06 Springfield is a rifle cartridge with extensive military use. The M1903 Springfield, M1917 Enfield, M1 Garand, M1941 Johnson Rifle, Famage Mauser, Browning Automatic Rifle, and other machine guns all used the round. Out of the M1 Garand, it has an effective firing range of 500 yards and a muzzle velocity of 2,800 fps.

Because historians have written entire books about how the M1 Carbine and M1 Garand came to be, we’ll do an abbreviated version of their stories here.

After World War I ended, the U.S. Ordnance began searching for an auto-loading infantry rifle. John Cantius Garand, a Canadian-born inventor, went to work for Springfield Armory to design the rifle the U.S. Army desired. His initial rifle design ultimately didn’t work out. However, his second rifle design eventually became the standard U.S. infantry rifle in 1936.

Springfield Armory began manufacturing the M1 Garand in 1937 and produced just ten rifles a day. Within two years, Springfield had reached an output rate of 100 per day. By the end of 1941, Springfield increased production of the Garand leaving the Army fully equipped. With the start of World War II, Winchester was awarded a contract to produce 65,000 Garand rifles. By the end of the war, over 5 million M1 Garands were built.

The Garand was the standard issue rifle for the U.S. Army and Marine Corps Infantry from 1936 to 1957. In its time, the rifle saw World War II, the Korean War, and the Vietnam War.

When describing a carbine vs. rifle, typically people describe a carbine as a more compact version of an existing rifle. However, that is not the case with the M1 Carbine. The M1 Carbine was actually the first major carbine not developed from a larger parent rifle.

Officially designated as US Carbine, Caliber 30 M1, the M1 Carbine’s designers made it to meet the U.S. Army’s desire for a “Light Rifle” for non-combat troops. The Army determined that the M1 Garand, which was the standard issue rifle, was too long and heavy for support troops. While the Thompson submachine gun, which was also in use, was shorter than the M1 Garand, it was actually heavier when fully loaded. The Colt M1911A1 pistol chambered in .45ACP was not a reasonable option because it lacked range and power.

World War II is not the only combat the M1 Carbine saw. They were also used in the Korean War by US troops, during the Cold War conflicts by American allies, and in the Vietnam War by the South Vietnamese.

Over six million M1 Carbines were produced during World War II, and it’s not uncommon to find these old war rifles among personal collections today.

It’s clear that the M1 Carbine and M1 Garand are two totally different rifles with totally different purposes. The M1 Garand was the standard issue service rifle for the U.S. chambered in the powerful .30-06 Springfield, while the M1 Carbine, chambered in .30 Carbine, gave noncombat and line-of-communications troops a lighter defense weapon that was not a pistol or submachine gun.

Luckily, if you’d like to purchase an M1 Carbine or M1 Garand, you can find them on the used gun market, or you can purchase through the Civilian Marksmanship Program which sells vintage rifles in various conditions.