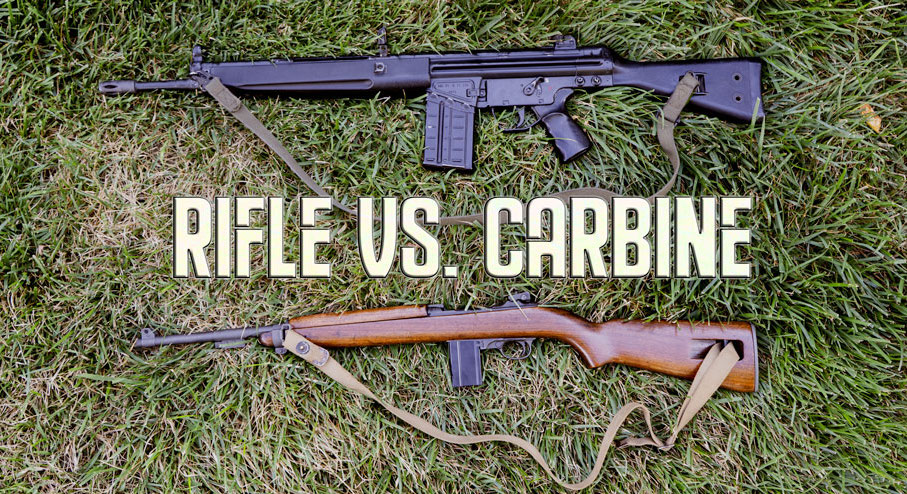 Rifle vs. Carbine – What’s the Difference?

I​f you’re reading this, you likely found yourself here as the result of a google search for rifle vs. carbine. Or, perhaps, “what’s the difference between a rifle and a carbine.” I’ve got about 30 seconds before you click off this page, so here’s the bottom line up front in the rifle vs. carbine debate.

In technical terms, a carbine is the term for a more compact (shorter barrel) version of an existing rifle. In modern terms “carbine” is accepted for just about any rifle we consider to be compact and easy to handle.

Rifle vs. Carbine: History of the Carbine

N​ow that the casual google searchers are finished, we can get into some historic nerdery and figure out how we ended up where we are.

The word carbine itself is from the French word carabine, which came from the word for “cavalry armed with a carbine” or caribiners. So that really doesn’t help the confusion between the two. It also doesn’t help that all carbines are technically rifles, because a rifle is a shoulder fired long-gun with a rifled barrel, and a carbine meets that definition.

To understand how we ended up here, I have to talk about horses. Specifically, European cavalry troops who were the first soldiers to be issued carbines. The idea was to have a shorter rifle, no longer than a saber in its scabbard, that traditional European cavalry could use effectively while mounted on horseback. Shortened versions of rifles or muskets were early examples in the late 1700s and early 1800s. In Europe, carbine development continued along those lines – “shrinking” existing rifles in carbines suitable for horseback use.

In the United States, the Civil War era Spencer Carbine was a shrunk version of the Spencer rifle. The Carbine was unique in that it was a breech-loading rifle that fired metallic cartridges fed from a 7 round tube magazine. Soldiers on both sides of the conflict prized the Spencer Carbine for two reasons. It held a lot of ammo for the time and was extremely quick into action in a close fight.

During the Wild West period, the famous 1873 Winchester was offered as a rifle with a 24-inch barrel. It was also offered in “carbine” configuration with a 20-inch barrel.

As the 1900s dawned, the term carbine began to shift towards its modern meaning.

The first major carbine not developed from a larger parent rifle didn’t come until World War 2. This of course is the famous M1 Carbine, which also gave us our defining military usage of the term carbine. This legendary rifle was designed to meet the US Army’s desire for a “Light Rifle” for non-combat troops. Formally it was adopted as US Carbine, Caliber 30 M1. This solidified the definition of “carbine” as a “light rifle” in the minds of a generation of veterans.

The concept of the carbine as a light and handy rifle ran headlong into the development of the assault rifle – select fire rifles firing an intermediate power cartridge, such as true AK47s or the M16. Suddenly all rifles were light and handy and fired smaller rounds than battle rifles. This might have killed the word carbine, if firearms designers hadn’t realized you could chop 4 inches off a 20 inch M16 barrel, and make the M4 which was even lighter, even more maneuverable, and didn’t really surrender much in terms of terminal ballistics to the larger rifle. The M4 Carbine became the gold standard for carbines, and at least of this writing, the military is still using them.

One interesting side development, is that there is a third definition of carbine. This definition applies to the consumer market. Pretty much any semi-auto rifle chambered in a pistol cartridge is referred to as a carbine. Specifically, a “Pistol Caliber Carbine,” or PCC for short.

Regardless of how the term came into use, the boom in popularity of PCCs means it is here to stay.

Answering the question of “rifle vs. carbine” is a fun trip down the history of rifle development. Frankly, it could have been a series of articles, but at least now you’ve got the basics down. Of course, that does leave us with one last question. How do you pronounce carbine? Is it “car-been” or “car-bine?”