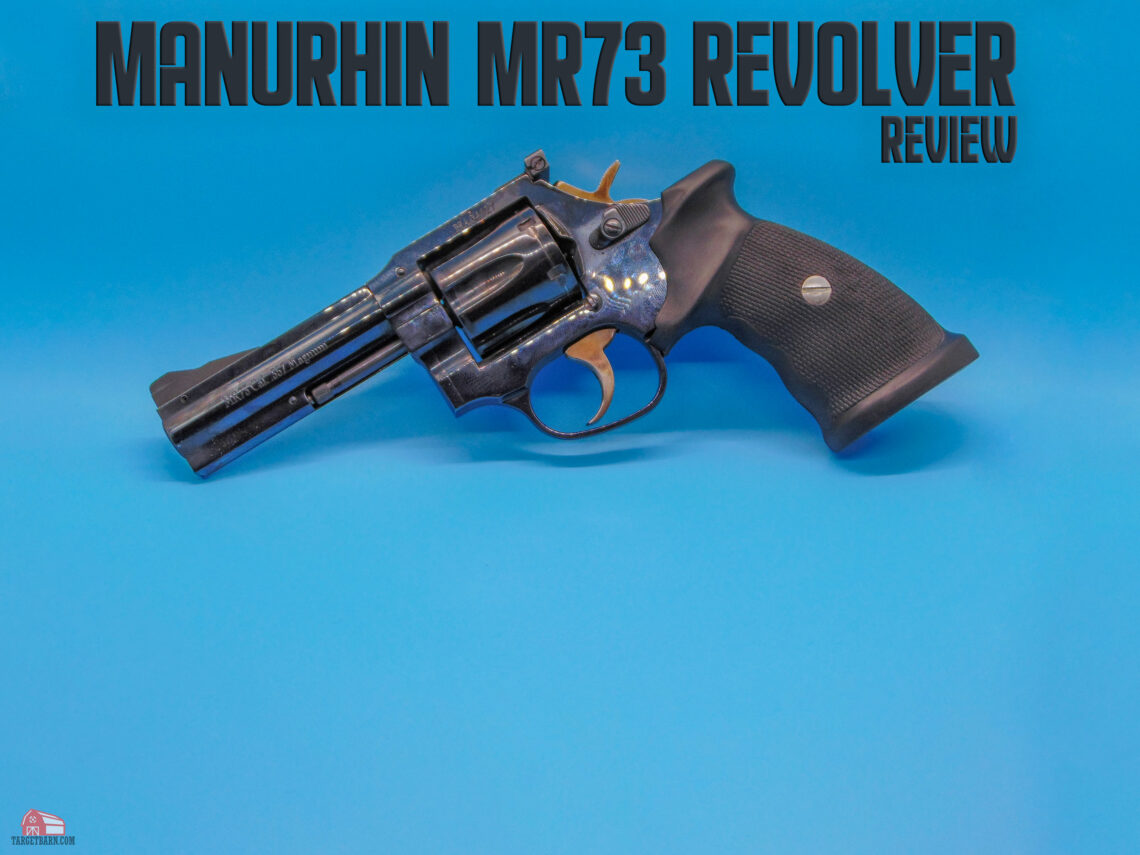 It’s known as the strongest .357 Magnum revolver in the world. It enjoys a legendary reputation for its use at the hands of French’s elite counter-terrorism unit. It’s unbelievably hard to get in America. It’s insanely expensive. It’s the Manurhin MR73 revolver, and now it’s in my hands.

History of the Manurhin MR73

There are countless articles covering the history of the Manurhin MR73, so we’ll  give you the cliff notes here. The French wanted a revolver for their counter-terror unit, GIGN. They weren’t satisfied with the American revolvers of the era, which makes sense because the Ruger GP100 didn’t exist yet. They contracted the firm Manurhin to produce the MR73, which held up to some legendarily rigorous testing. It fired over 100,000 rounds through a single gun without a single dimensional change in the revolver. As this would have absolutely wrecked a K-frame of the era, people were, and still are, impressed. As they well should be, because firing over 100,000 rounds of full power .357 Magnum ammo through one gun is an incredible feat.

GIGN’s training regimen was no joke either; individual officers would fire at least 100 rounds of full power 357 Magnum ammo a day during their duty week. That kind of firing schedule is absolutely murder on guns. As a result the MR73 developed a reputation for bomb-proof reliability.

Getting your hands on a Manurhin in the United States has never been easy. They’ve been sporadically imported through the years, and as a result command huge prices among their rabid fan base. But in 2020, Beretta USA announced that they would begin importing the MR73 in 4 inch and 5.25 inch barrel lengths. For the first time in decades you’d be able to buy a brand-new manufactured Manurhin MR73. The price tag isn’t for the faint of heart, clocking in at $3,300 MSRP. However, the MR73 is one of those sorts of things that costs what it costs, and you don’t really question it.

Why is it so Expensive?

Simply put, materials and labor. While domestic manufacturers use cost saving measures like metal injection molding to make small parts, all of the small parts in the Manurhin MR73 are forged from steel. On the labor front, that also means that the guns require hand assembly. There are basically three guys in a factory in France that build every Manurhin MR73 that goes out the door. Unlike in America, most of Europe considers gunsmithing a skilled trade. The gunsmiths at Chapuis (the French company that makes the MR73) are some of the best in the world.

However, asking why an MR73 is like asking how much a Rolex costs, or a Ferrari. Either you can afford it or you can’t, and if you can you don’t really care how much it costs, you just slide your black card across the class at one of the Beretta Galleries and don’t worry about the rest. Which of course is the entire point of a gun like the MR73… to most people.

Testing the MR73: What if you treated a Ferrari like a Toyota?

I’m not most people, so when Beretta offered to send me an MR73, I said “you know I’m going to **** this gun up, right?” They said “aight bet” and sent me a 4 inch Manurhin MR73, known as the Gendarmerie model. To test the gun, I thought “sure I can shoot groups and do slow fire” but what’s the fun in that? I did do all that stuff, because the data is informative, but what I also did was run the Manurhin during a shortened IDPA season as my primary gun for matches and dry fire.

IDPA with the Manurhin

The International Defensive Pistol Association, IDPA, is the largest shooting sport that allows six-shot revolvers that utilize speed loaders to be competitive. There is also Classic division in ICORE (the International Confederation of Revolver Enthusiasts), but ICORE is much smaller than IDPA as an organization. I spent 6 months outside St Louis this past year, so I was able to shoot the MR73 in the Illinois State Championship, the Hoosier Daddy Challenge, and quite a few club matches. I wasn’t able to make IDPA Nationals with the Manurhin because of my work schedule, and missed a 3rd major match because of a technical issue we’ll cover later.

My training for matches is pretty straight forward: at least one range session a week, 1-2 club matches, and a major every other month. I also dry fire 5 days a week for 10-20 minutes — I put my revolvers to work.

In the past, I’ve run quite a few revolvers with some impressive round counts through this training regimen:

But the all time king is a standard (modified by me) Ruger GP100 that I ran through all of 2012 and parts of 2013 that ended up with 10,169 rounds on it. With all of these guns that get high-ish round counts, I keep up on cleaning and maintenance, changing wear parts when necessary when the gun reaches a breaking point.

With that training plan in place, I set off through my shortened IDPA season. The bottom line up front: I won Revolver division at every match I shot the MR73. I also placed pretty well in the overall at a few club matches. The toughest match was the Illinois State Match, where I edged into the winner’s column by half a second. Throughout the season, I found the MR73 to be pleasant to shoot, easy to reload, and unbelievably accurate. 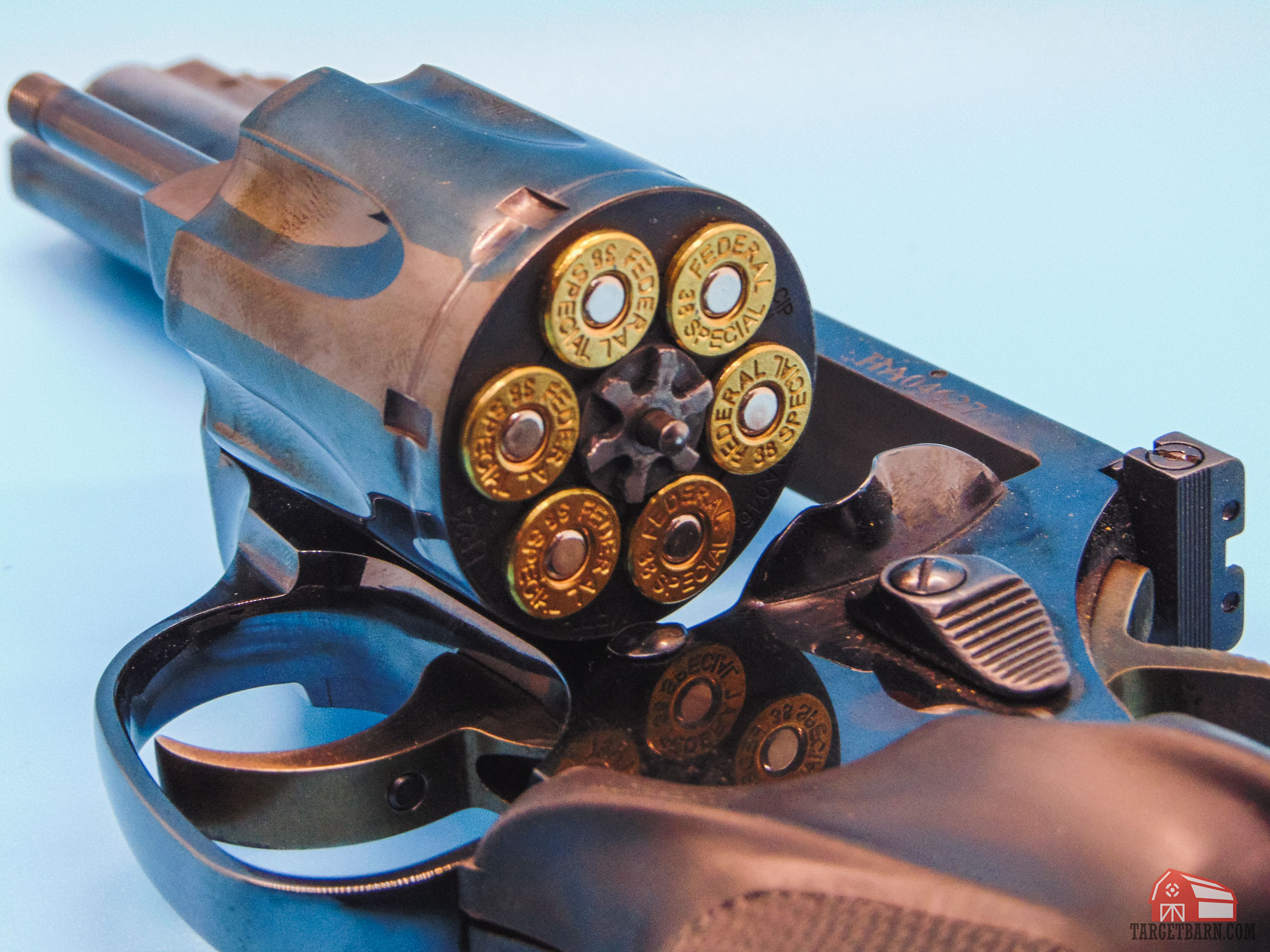 First off, the gun is a traditional double action/single action revolver; it operates primarily in DA. The shooter can thumb cock it into single action mode if desired. The DA trigger is adjustable for weight by the end user and does not require an armorer to improve the trigger pull. This means that the gun from the factory has one of the best DA pulls I’ve ever experienced. Mine was in the 8lb range and successfully detonated every primer I put under it.

The rear sight is adjustable for windage and elevation. It features two white dots which I immediately blacked out with a sharpie. The front sight is a black ramp. One of the minor complaints I had about the gun were the sights – while a thick black front sight with a narrow rear notch is fine for bullseye shooting, it’s not the best set-up for speed. I would have preferred something more like Ruger’s fiber optics on the GP100 Match Champion series.

While I don’t personally like the sights, they certainly do provide enough feedback for serious accuracy. I shot multiple 25 yard 99s on a standard B8 using cheap FMJ practice ammo, and threw down another 99 with Federal 148 grain wadcutters. If I was going to grab a gun out of my safe to knock Xs out of bullseyes, it would be the Manurhin MR73 for sure. 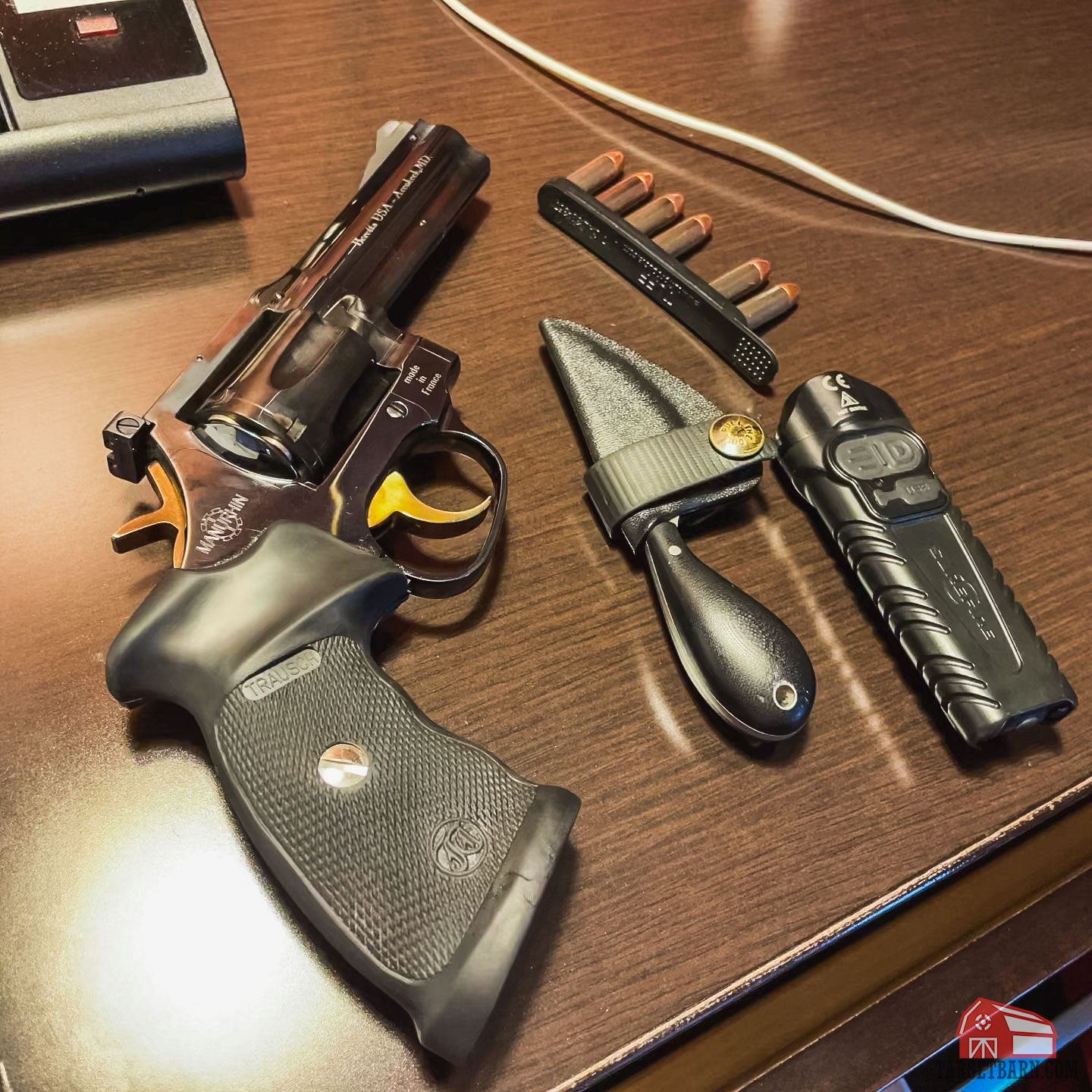 People often ask about the unusally shaped Trausch grips, which have a beavertail/hump on them. I actually ended up really liking the Trausch grips, since they allow me to get a really high strong hand position on the gun. This helps manage recoil and keep the gun flat for fast follow up shots.

While they render the gun extremely difficult to conceal, for a gun that’s intended for a duty holster, I think they’re a great grip. I wish VZ Grips would make a shameless copy for GP100s out of G10.

Disadvantages of the Manurhin MR73

On the technical front, there are two things I didn’t like. The first is the serrated face of the trigger. Serrated triggers aren’t great for speed shooting because they don’t allow your trigger finger to move freely on the trigger face. The second thing I’m not a fan of is the cylinder itself; specifically the charge holes. There is no chamfer whatsoever on the charge holes, which I feel like a 3300 dollar gun should have. My Pro Series S&Ws and my Super GP100 all have chamfered charge holes, and cost 1/3rd what this gun costs.

A last piece of good news: the MR73 accepts most K-frame accessories. During my matches I used K-frame holsters and Safariland Comp-III speedloaders designed for K-frames without an issue. That means there aren’t any concerns about support gear being available. 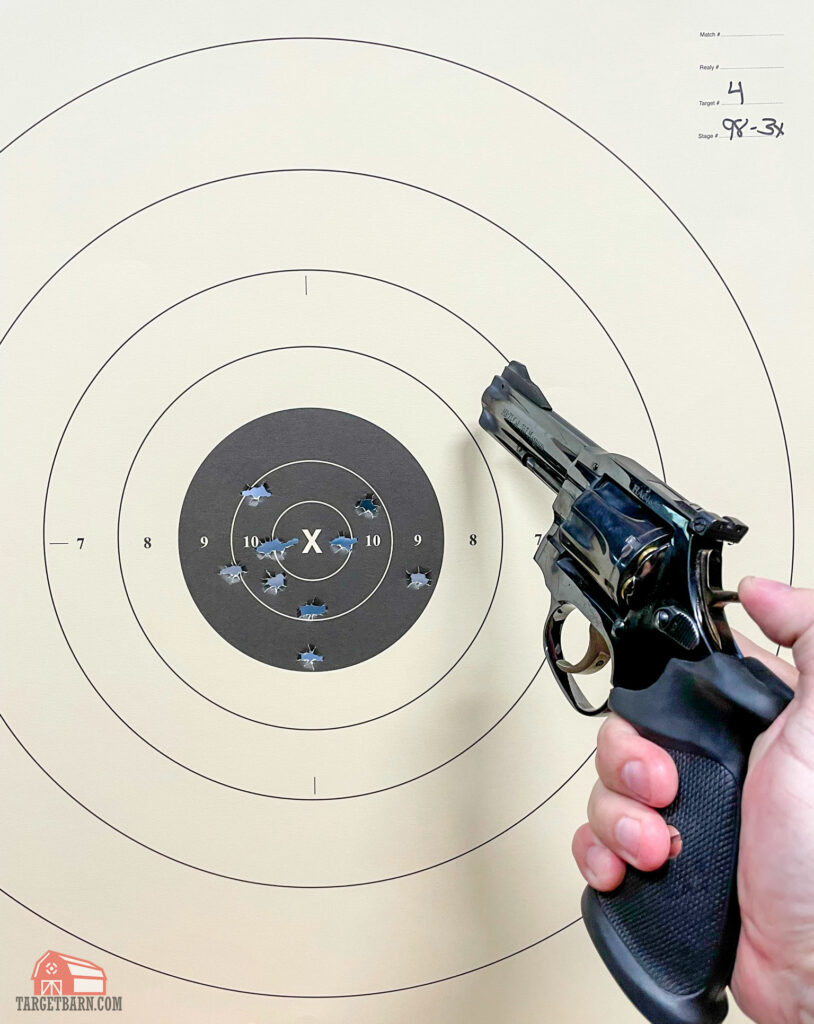 Now, here’s the tough part of the review. After about 1300 rounds and double that in dry fire, I broke the Manurhin MR73. Specifically, I rounded off the top of the cylinder stop by working the trigger fast in DA to try and get sub 0.20 splits. Manurhin and Chapuis shipped me a new cylinder stop and spring after speaking with them, resolving the issue.

Was I a little surprised that the gun went down after 3,000-ish trigger presses? Of course. Did I mind? No, not at all. Guns break when you run them hard, even guns that have a reputation for durability. It’s entirely possible that I got a gun with a cylinder stop that wasn’t properly heat treated, so slamming the cylinder notches into it over and over again just aged it prematurely. Yes, fixing this problem required a gunsmith, but who do you think fixed these guns when they’d break during training?

In the words of Tom Petty, “let’s get to the point.” The point is that this gun is awesome. It is the second most mechanically accurate revolver I’ve ever fired, has the best out of the box trigger of any revolver I’ve ever shot, and it looks absolutely fantastic. Did I break it? Yeah, but is the average user going to slap this thing around in IDPA matches like it’s a $500 GP100? Absolutely not. Would I buy it? Absolutely. I’d buy it because guns like the Manurhin MR73 are special for what they represent. It’s beautiful, and it’s wonderfully engineered. Owning one is like owning a functioning time capsule. It’s made exactly the same in 2021 as it was in 1973, and it represents the pinnacle of what was possible for a duty gun in 1973.

Either you’re the sort of person who thinks that is worth 3 grand, or you’re not.