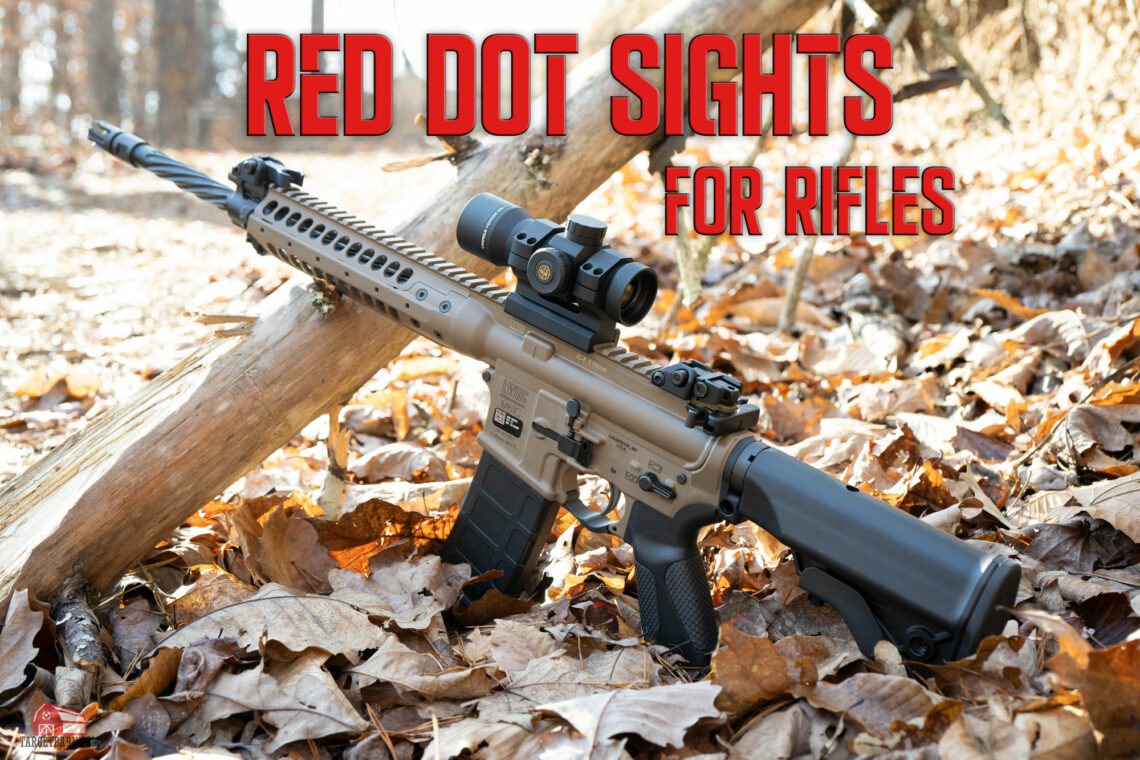 Red dot sights for AR-15 rifles are extremely popular among shooters. A lot of gun owners, myself included, have used a red dot mounted on an M4 carbine in military service, so the platform is familiar and accessible. Other shooters were first introduced to shooting with a red dot sight on a .22 LR rifle, and now may be looking to upgrade their rifle to something a little more exciting to shoot.

We started red dot series covering the basics of red dot sights. In this installment of the series, we’ll look at red dot sights for AR-15 rifles.

Are Red Dot Sights for AR-15 Rifles a Good Idea?

Are red dot sights for AR-15 rifles a good idea? Absolutely! Red dot sights are an easy upgrade over iron sights, since they allow the shooter to keep his or her eyes focused on the target instead of looking at the front sight. Plus, with many manufacturers shipping rifles without any sort of sights and calling it “optics ready,” a red dot sight is an affordable way to get some kind of aiming device on your AR platform rifle.

When Isn’t A Red Dot On A Rifle A Good Idea?

In some circumstances a red dot sight on your rifle might not be a good idea. The most obvious is if you’re constantly making shots at ranges in excess of 300-500 meters, for example. Or, if you’re making shots at distances above 100ish yards that require a high degree of precision, like big game hunting or sniping. There’s a reason you don’t see modern precision rifles equipped with red dot sights. That’s because the demands of the sport require a higher level of precision than you can get from a dot.

Generally speaking, rifle red dots are different from those mounted on pistols in two key ways: they tend to be larger, and they tend to be closed tubes. While the most common pistol red dots like the Trijicon RMR and Holosun are “open emitter,” the most common and popular rifle red dots use a fully enclosed tube. While you could certainly mount a red dot with an open emitter on a rifle, it’s a generally accepted best practiced that enclosed optics are superior.

Another characteristic that you’ll see on rifle optics is a smaller MOA dot. On pistols, dots with very small MOA can be distracting. That’s due to the amount of movement that the user imparts to the dot. Small dots appear to “shake” more on pistols. That’s why the most popular pistol sights use a 3 MOA or larger dot. Rifles but will sometimes have dots as small as 1 MOA, and the super popular Comp M4 from Aimpoint features a 2 MOA dot.

I​f you’re shopping for a red dot, we have some recommendations to get you started. Our top 3 picks are:

Keep reading to see why each of these made our list.

The AimPoint Comp M4 is the gold standard of rifle red dot optics. It has been in service with the US military in various versions for over a decade. It’s built like a tank, I’ve personally seen these optics get run over by trucks and hold zero. It takes a common battery (AA) and still provides over 80,000 hours of constant run time. It is definitely an expensive option. It’s also one of the best red dot sights ever made. 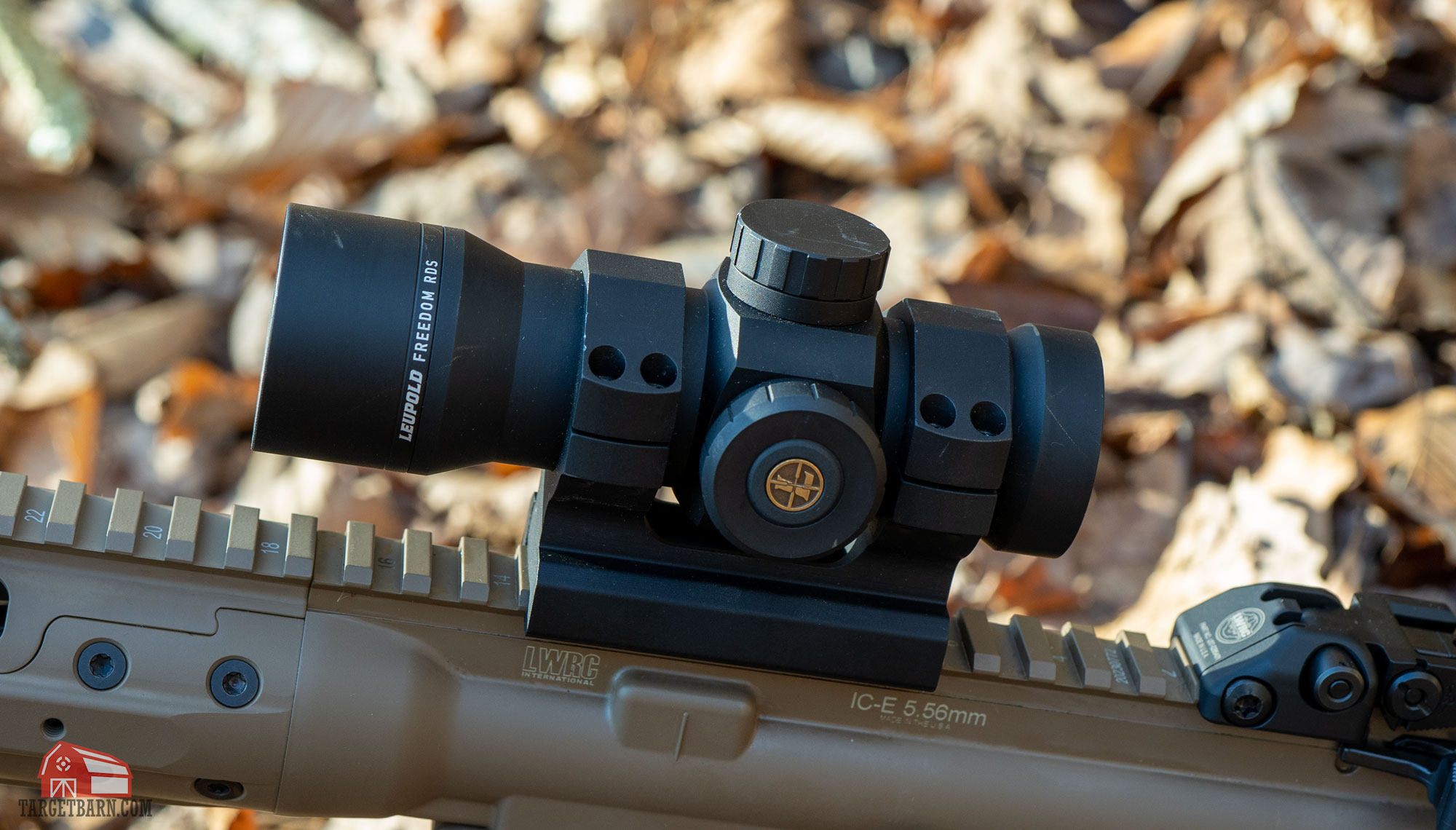 The Leupold Freedom RDS is a great choice if you want an optic with a similar footprint to the Comp M4, but don’t want to drop $600-$900 for the Aimpoint. The Leupold is a quality, well-made product with a super precise 1 MOA dot. The smaller dot makes it a more precise optic. So, if you’re looking for a fast and accurate red dot for hunting, this would be a great choice. 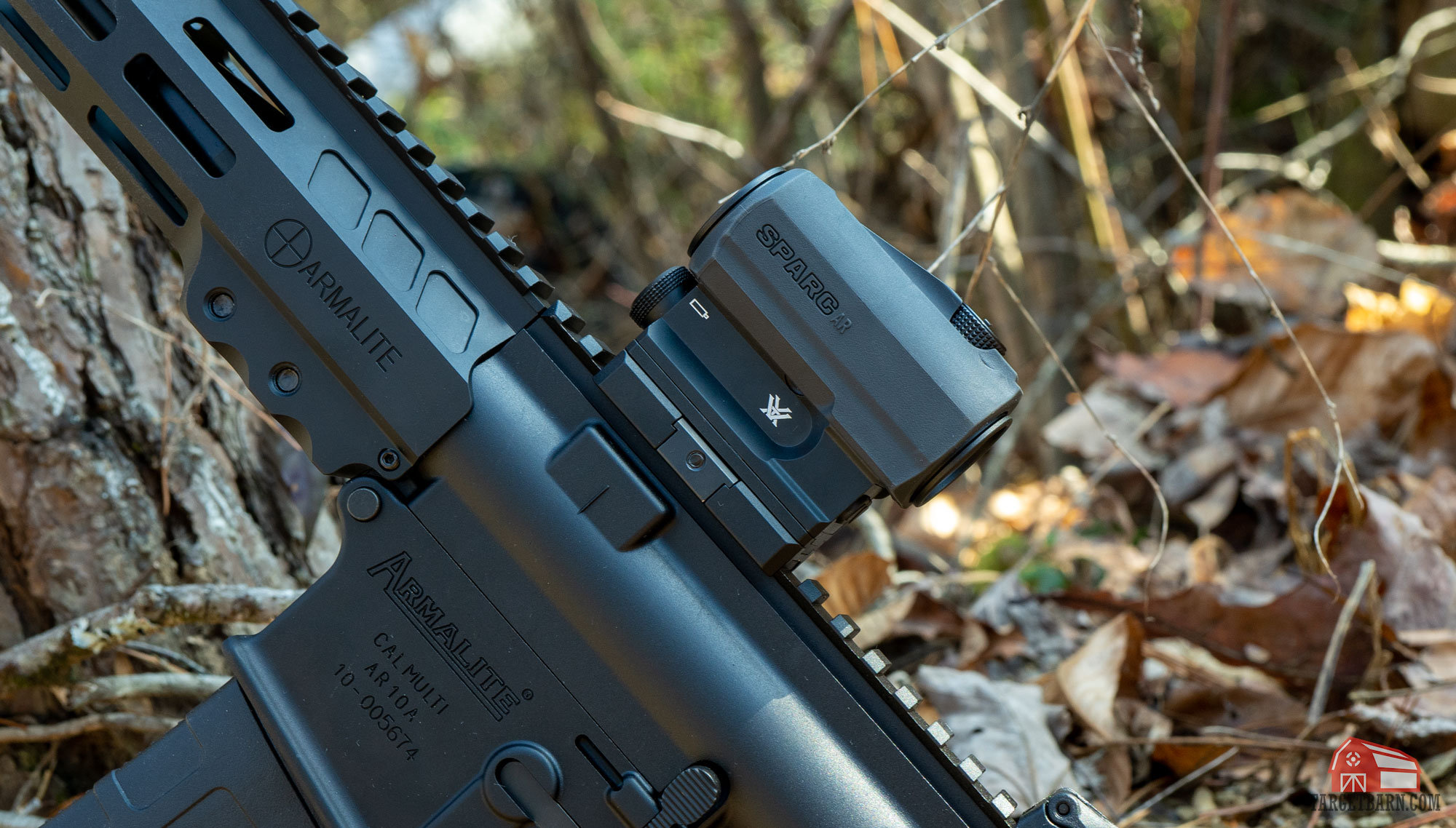 Slightly more affordable than the Leupold is the SPARC AR from Vortex, which interestingly is the red dot I currently have mounted on my PCC. The Vortex has some very nice, user-friendly features. For example, the SPARC AR comes attached to the riser. This means you can easily drop it on your rifle right off the bat. Sure, it’s not as rugged as the Aimpoint, but then again nothing is. For me, and for the money, the SPARC AR is the best optic if you’re looking to dip your toes into red dot rifle shooting. You want a good product, but don’t want to break the bank, right?

Whatever your choice is, shooting a rifle with a red dot is going to be a much more enjoyable experience than shooting with iron sights. 20 years ago in 2002, only cool operators had red dots on their weapons. Now? Everyone does. Maybe it’s time to get one for yourself.