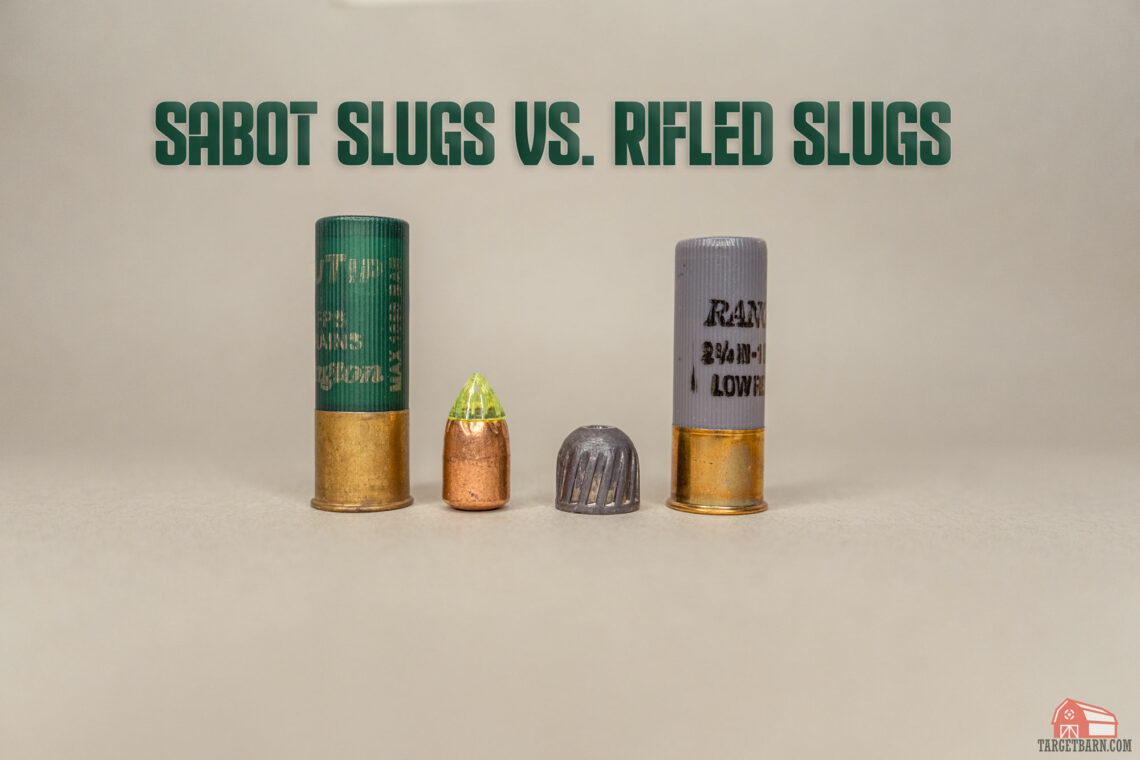 If you’re new to shotguns, it’s important to learn the basics of shotgun ammo and we’re here to help! Today we’re looking at shotgun slugs, but more specifically, sabot slugs vs. rifled slugs.

Most shotgun shells are loaded with shot pellets. Pellets are small projectiles that spread out in a loose pattern before hitting their target. But when its shell is loaded with a slug, a shotgun performs more like a rifle as it fires one large, single projectile. A slug is not a bullet per se, but it is the closest thing to a bullet you’re going to find loaded in a shotgun shell.

You read that right. It sounds counterintuitive, but rifled slugs are for smoothbores, and sabot slugs are for rifled bores. It’s important to learn this rule. A rifled slug may easily damage a rifled bore, and a sabot slug, although typically safe for a smoothbore, will become horribly inaccurate as soon as it exits the muzzle. (Note that some exceptional slugs are compatible with both types of shotgun barrels, although you should never assume you are firing such slugs.)

Aside from the types of shotgun barrels they’re designed for, what is the difference between sabot slugs vs. rifled slugs?

What Is a Sabot Slug? 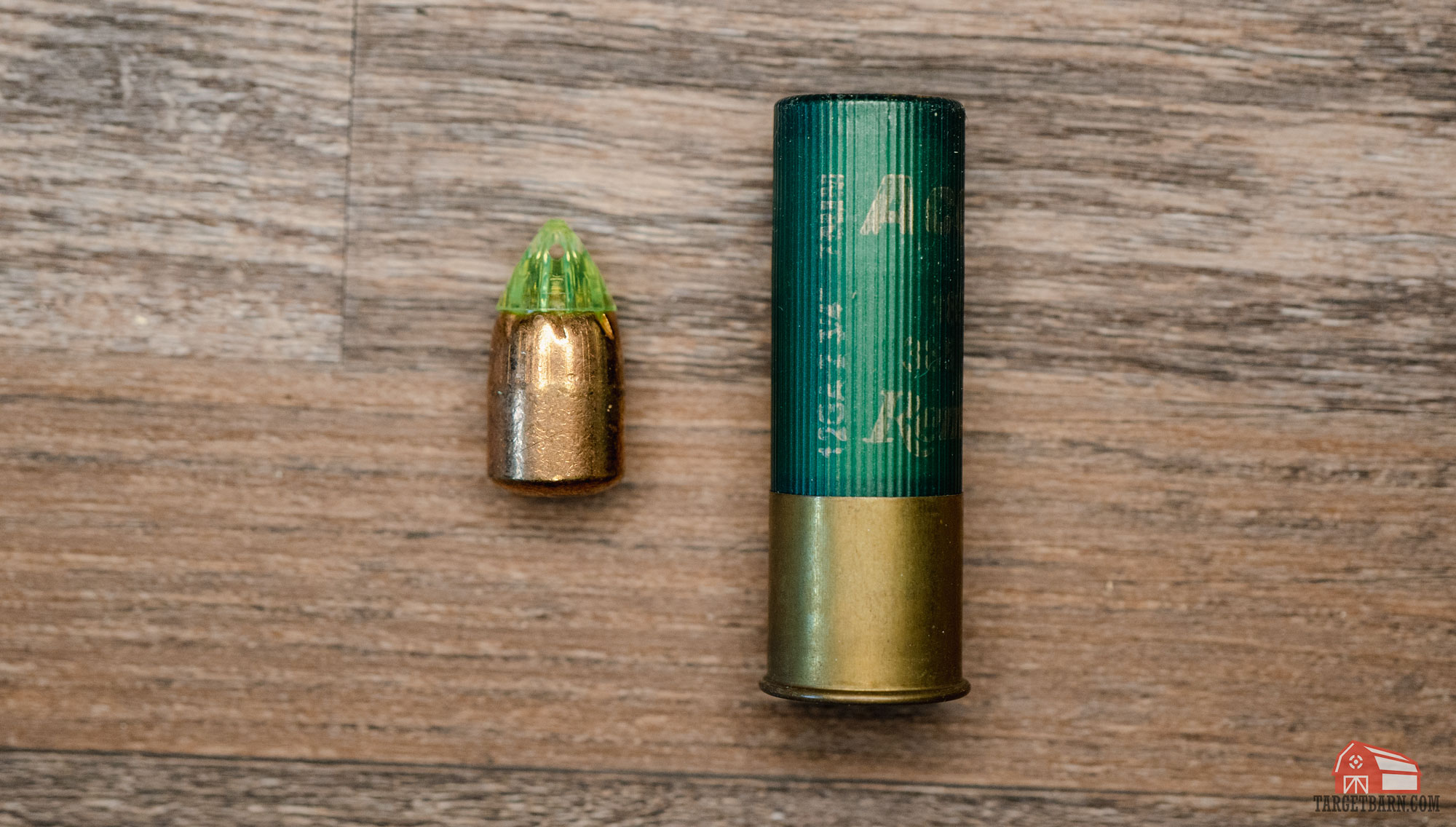 Sabot slugs lack rifling, and at first glance resemble very large rifle bullets. The sabot itself is technically its own separate component. It is a plastic cup which cradles the slug, much like a foam koozie holds a can of beer.

A sabot slug doesn’t actually come into contact with a shotgun’s rifled barrel – only the sabot itself does. The plastic sleeve actively engages with the barrels rifling, which in turn imparts gyroscopic stability to the slug it is cradling. When the sabot slug clears the muzzle of a shotgun, air resistance immediately slips the sabot off so it can’t hinder the slug’s trajectory.

What Is a Rifled Slug? 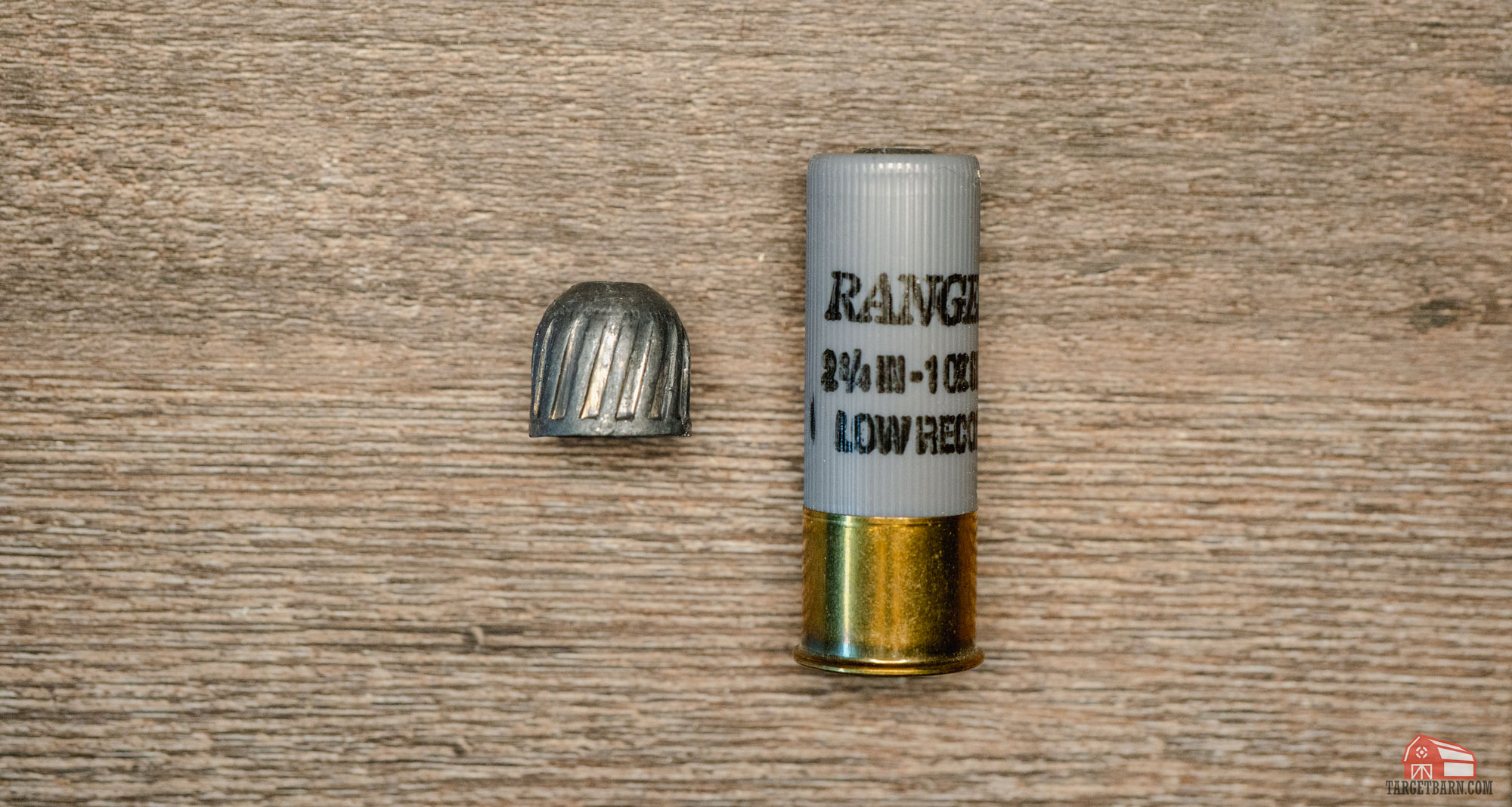 A rifled slug is made of lead and may have a solid point or a hollow point. The rifled slug’s defining feature is the series of grooves surrounding its exterior. These grooves resemble the rifling inside a gun barrel. However, they do not actually cause the slug to rotate inside the barrel to help stabilize it for more accurate flight. A rifled slug’s grooves may help it align correctly with the barrel throughout ignition. More importantly, the grooves allow the slug to compress. This allows it to safely pass through a muzzle that is outfitted with a choke tube.

A Foster slug is technically its own thing, but most rifled slugs also qualify as Foster slugs. This is because a rifled slug typically has a large hollow in its base. This distributes its center of mass toward its tip for enhanced in-flight stability.

Which Is Better: Sabot Slugs vs. Rifled Slugs?

Rifled slugs are less accurate than sabot slugs. Appreciating why is as easy as throwing a football. If you put some spin on the ball before it leaves your fingertips, you’re going to have a much easier time passing to a friend than if you hadn’t put any spin on the ball at all. The sabot slug is the spinning ball in this analogy.

A sabot slug isn’t all that much more accurate, though. A rifled slug can easily land around 400 yards away. However, the distance at which you can aim one and reasonably expect to hit your target is only around 100 yards. In contrast, a sabot slug typically remains effective up to ranges between 125 and 150 yards.

Sabot slugs have higher ballistic coefficients, which essentially means they create less in-flight drag. This is largely due to their rotational stability, but also because they are more aerodynamic than rifled slugs. Whereas a rifled slug often has a blocky cylindrical profile which is made even less ballistically efficient by its deformed exterior grooves, a sabot slug has a sleek, grooveless, pointed profile. A sabot slug also often has a smooth copper jacket. It may even have a streamlined polymer tip (as is the case with the Remington Accutip).

Its superior accuracy and harder punch on impact are both why the sabot slug outperforms the rifled slug over longer distances. It stays effective for hunting and self-defense at ranges up to 50% farther away!

Why Use Shotgun Slugs?

Sabot slugs may be more accurate than rifled slugs, but both pale in comparison to rifle cartridges. 308 Win ammo has an effective range of about 900 yards, and the 30-06 consistently hits 1,000-yard targets. So what is the point of shotgun slugs?

A slug’s significantly shorter range is actually its greatest advantage. A slug which hits the ground after traveling about 400 yards is much less likely to exit the hunting area where it could jeopardize an innocent bystander. If you fire a 30-06 into the air, that bullet could potentially harm someone even if they’re standing over four miles away! This is why some jurisdictions require residents to exclusively hunt deer with shotguns.

Both types of slugs are extremely powerful within their effective range. A 12 Gauge shotgun firing a slug can easily pack more than twice as much muzzle energy as an AR-15. This is why law enforcement often use slugs as well as shooters using shotguns for home defense. One ounce of lead traveling at about 1,000 mph ought to put an immediate stop to even the most determined threat’s plans.

Shooters don’t typically use sabot slugs for home defense. That’s because the accuracy advantage it offers beyond 100 yards isn’t of much use while you’re attempting to neutralize an immediate threat to your personal safety. We’ve previously covered the buckshot vs. slug debate. Shooters often use rifled slugs for home defense. However, most homeowners who would use a shotgun for personal protection prefer buckshot as it is highly effective at short range, less likely to pass through the threat and/or multiple walls, and delivers a spread which presents a more generous margin of error while aiming.

If you have the rifled bore shotgun you would need to fire it, a sabot slug will deliver better accuracy and more energy to its target than a rifled slug. But if you have a smoothbore shotgun, a rifled slug can still serve up both the accuracy and the terminal performance you need for hunting or home defense.