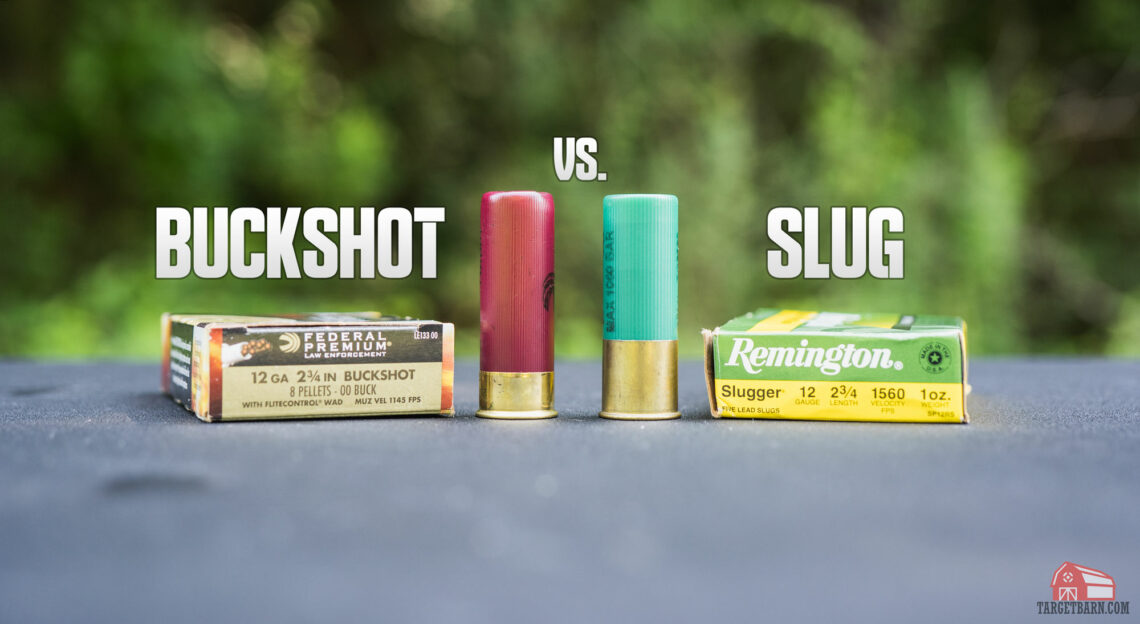 Shotguns enjoyed a resurgence in popularity in 2020, thanks in no small part to a global pandemic, civil unrest, and a hotly contested election. This has first time gun buyers asking an age-old question: which is best, buckshot vs. slug?

Of course, the real question is “slugs or buckshot for what?” Because the answer could be different depending on your use case. If you bought a shotgun for deer hunting because you live in a weird state like Indiana that doesn’t allow rifles, slugs are your answer. But since the shotguns that are selling are all home defense-style shotguns, we’ll assume that if you’re here, the question you’re really asking is “which is better for home defense, buckshot vs. slug?”

Buckshot vs. Slug: What’s the Difference?

Before we get into which is best for home defense, we need to know the difference between a buckshot and a slug.

Buckshot is a type of shotgun cartridge that is loaded with anywhere from 8 to 18 pellets known as “shot.” The farther the shot travels from the barrel, the more the projectiles will spread and risk hitting something other than the intended target.

What is a Shotgun Slug?

Rather than being filled with many smaller pellets, a shotgun slug is loaded with one large metal projectile.

So, which is better for home defense: buckshot or slugs? Sad news, friend. The answer is still “it depends,” because your individual home defense situation is different from everyone else’s.

Let’s break this down. The first consideration is what range can you realistically expect to take a home defense shot at in your dwelling? This is important because buckshot vs. slugs have vastly different maximum effective ranges.

For buckshot, your maximum effective range is going to be determined by how your shotgun and buckshot load of choice pattern. Different people have different ideas of what an acceptable pattern is; for me the maximum effective range of my shotgun is the distance that it will keep all 8 pellets in the A/C zone of a standard USPSA target. Pellets missing the target due to a wide pattern isn’t acceptable, because those projectiles will hit something eventually.

This is also why I favor Federal Flitecontrol 8 pellet 00 buck or Hornady Critical Defense 8 pellet 00 buck. Out of my gun, a Beretta 1301 with a modified choke, both of these loads shoot smaller than fist sized patterns at 10 yards. 10 yards also happens to be the longest possible shot I could take in my current living situation. So, for my purposes, it’s all buckshot, all the time.

But suppose I had a house with a yard instead of a condo; and suddenly I had to worry about dealing with 25 or even 50 yard shots. Once upon a time in another lifetime, I lived in a quiet suburb of Indianapolis, in a cookie cutter subdivision. The distance from my front door to the end of my driveway was about 35 yards, which would have been beyond the safe engagement distance for the 1301, unless I wanted to put a stray pellet through my across the street neighbor’s window. Since I liked my neighbors, I wouldn’t want to do that.

This is where slugs are important, because they give you that ability to reach out past buckshot ranges and solve intermediate problems. Yes, a carbine would probably be a better choice, but let’s say we only have access to a shotgun. The minute you have to deal with shots longer than 10-15 yards, slugs become a very good idea. Unless you live in the middle of nowhere and stray pellets aren’t going to hit anything but the earth. Still…

Now that we have some good use cases for slugs vs buckshot, let’s talk practical applications. Analysis of police and self defense shootings with shotguns shows a couple of important notes.

The first is that I have never been able to find an instance where someone required more than one round of properly applied 00 buckshot. Clint Smith says that “shotguns will physically remove a chunk of s*** off a person” and he’s not wrong. This is good news because the other thing we’ve learned from a lot of shotgun shootings is that when people take shotguns into fights, they rarely have reloads accessible. Usually it’s just whatever ammo is in the gun and if they’re lucky, a shell carrier or butt-cuff on the gun with some extra shells.

Personally, I’d like to have extra ammo on the gun. Specifically because my buckshot problem might turn into a slug problem. If that happens and I don’t have any slugs on the gun to do a quick changeover, I might be in trouble. I like to keep 3 slugs as part of my reload…just in case. The shotgun itself is loaded to max with buckshot, because again, that matches my potential threat profile.

In terms of terminal ballistics, the slugs vs buckshot debate is a wash. Shooting someone with 8 pellet 00 buck is like shooting them 8 times with 9mm ball but all at once, and is absolutely devastating.

Shooting a person with a slug is similarly devastating. That’s because the slug is packing enough energy to cross the barrier into causing rifle-level secondary tissue damage.

The short version: shotguns with slugs or buckshot will ruin a bad guy’s day. You still have to aim them to get this effect. However, if you’re worried about which one is more effective, don’t.

The ultimate deciding factor in the buckshot vs. slug debate is circumstances. What do your shot profiles look like, and how would you expect to use the gun? If it’s all close range/in-home stuff, buckshot is the way. Longer distances might require slugs. So, having a few on hand to change out your buckshot load is a good idea.

Regardless of what you pick, you absolutely must know what your shotgun patterns look like, and what your groups are with slugs. All bullets hit something, after all. We need to make sure we only hit stuff that needs a bullet.