Of all of the senses we use for shooting, vision is undeniably one of the most important.

Our eyes are how we identify what we’re shooting at, look at our sights or optics, and line them up with our targets. A lot goes into exactly what we need to see, where we need to focus, and how sharply defined the sights or the target need to be in order to get good hits.

Before any of that becomes an issue, though, there’s a threshold question to answer: which eye should we use? While the average human has two eyes and binocular vision, only one eye can physically line the sight or optic on a gun with the target.

To answer that question, we have to start with some basic concepts. The tl;dr (too long; didn’t read) is in this video, but if you want to delve into the hows and whys, keep reading…

People are generally right-handed or left-handed. They write with one hand, probably throw a ball with that hand, and usually prefer to use that hand for everything else when possible. For a number of reasons, though, some people will use one hand for some tasks, and the other for other tasks. Maybe they had a teacher or coach who wouldn’t let them write or throw left-handed, or it was easier to learn how to use a certain tool right-handed. And a lucky few are ambidextrous, and can use either hand equally. Eye dominance, also known as eyedness, is a lot like that. 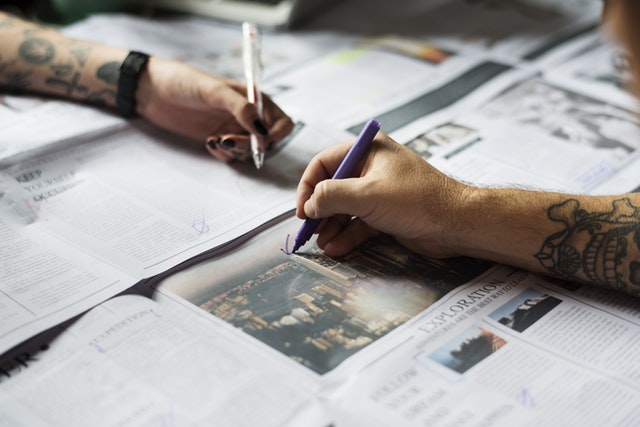 You likely have one eye that your brain prefers to use for primary visual input. There are a number of tests that you can try to figure out which one that is.

One of the simplest is to make a tiny triangle with your hands, stick your arms out straight, and look through that window to a small object in the distance. Now close one eye. Do you still see it? If yes, your open eye is your dominant eye. 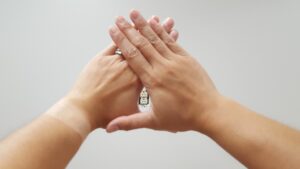 But remember how not everyone is strongly right- or left-handed? It’s the same with eyes. Eye dominance is like a slider, and you can be anywhere from extremely dominant on one side to equally dominant between both eyes.  Generally speaking, you’re probably more dominant one eye or the other.

Your primary pistol hand, the one that controls the trigger, can be whichever hand you want.

One primary caveat to that is that while there are handguns with ambidextrous controls, you’ll generally find that most are geared towards people who are right-handed. That’s even truer once you get into accessories like holsters, which are sometimes made only for right-handed folks. That’s not to say that you shouldn’t shoot pistols left-handed if you’re left-handed, but you should be aware that it might come with a few extra challenges.

There are some instructors who encourage shooters to use the hand that matches their eye, or to retrain the eyes so that the eye matches the preferred hand.

That can get a little awkward, especially when you’re very strongly dominant in one hand or eye over the other. So what can you do instead?

Strategies for the Cross-Dominant

For pistols, you can use many strategies to stick with the hand and eye you prefer and still shoot effectively. Some of them are more effective than others, and I’ll talk below about why you might or might not want to choose one of them before I get to what I think the simplest solution is. 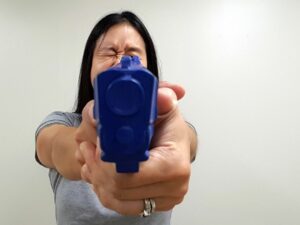 The advice goes like this: pick the eye you want to use, close the other one. Of course, not everyone can close just one eye on demand, so that’s a challenge. But even if you can, there are some downsides.

Closing one eye tends to make you scrunch up your face a bit, and squint your other eye a tiny bit closed. Not only can that be difficult for you to maintain under stressful situations, that tension in the face can compromise vision in your open eye and even affect your accuracy when shooting.

It’s a fast, simple fix, however, and one that is especially useful when used occasionally by people who are closer to dual-dominant in the eyes or who for strategic purposes want to force the use of a particular eye under specific circumstances, such as to expose less of the head around a piece of cover.

Covering one lens of your eye protection 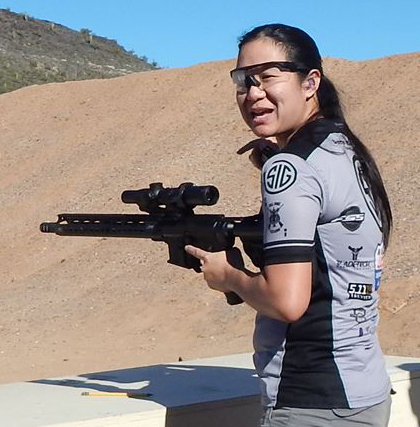 Variations on this theme range from using a completely opaque blocker over an entire lens to putting a piece of translucent tape or a smear of lip balm on the lens just over where the where the eye you don’t want to use looks through.

Either way you go, you avoid the face-scrunching that happens with closing an eye and if you don’t cover the entire lens or do use a translucent solution, you will maintain some more peripheral vision. This solution can also be helpful as “training wheels” if you aren’t strongly dominant in one eye, and it’s a bit easier to manage than closing an eye.

The biggest problem is that you might have to shoot someday without your regular eye protection, especially if you’re interested in shooting for self-defense reasons.

Turning or tilting the head 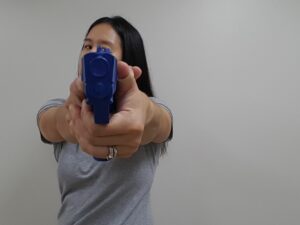 When you bring your gun up in front of you, you can get the necessary eye behind the sights by turning your head to one side or tilting it sideways. It’s a fairly common recommendation, but it’s still not quite ideal.

One issue is that your head just won’t want to stay that way for long periods of time. Your neck is going to get tired and sore, and your head will want to return to being upright and pointed forward when you start moving.

After all, you don’t walk around off the range with your head off-kilter all the time, do you? 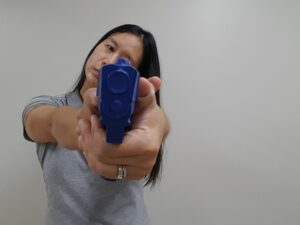 Both of these tactics can also have negative effects on your peripheral vision and even your ability to manage recoil if you are using an otherwise modern isosceles type of stance. 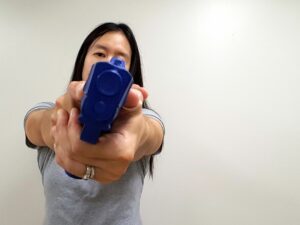 The standard way to hold a pistol is straight up and down, so that the grip is perpendicular to the ground. By tilting the gun at a slight angle, the shooter can line the sights up in front of her dominant eye. It’s a fairly subtle change in how the gun is held, but it does have some side effects.

It’s difficult to keep that cant consistent once you are no longer standing square to your target, though, and at longer distances, there will be some effects on where the bullet is going to hit your target. The cant may also contribute to functional problems in semiautomatic handguns, because brass will extract more upright or potentially more into walls or other surfaces near the gun.

In addition, pistols recoil oddly when they aren’t held vertically. They’re a bit harder to control because the muscles in your hands, arms, and shoulders are less efficient at controlling diagonal motion, and the sights will track less predictably.

Shifting the gun in front of the body 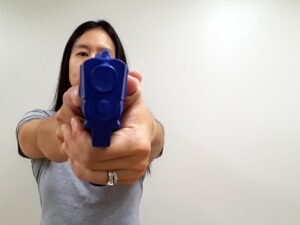 When using the modern isosceles stance, pistols are held in the middle front of the body. For cross-dominant shooters, keeping the gun in exactly the same grip and angle, but simply moving it over across the vertical midline of the body by an inch or so is enough to put the sights in front of the dominant eye.

It doesn’t require any changes to your equipment and doesn’t require any bodily contortions in the same way as the some of the other solutions. In fact, it’s so natural that many cross-dominant shooters arrive at this technique by themselves if they aren’t aware that they are cross-dominant or if they haven’t been exposed to the other solutions out there.

And while “everyone else does it” isn’t always the best reason to do something, it’s telling that top shooters who are cross-dominant generally choose to shift their guns instead of or as part of other solutions to get their sights between the eye they’re using and the target. 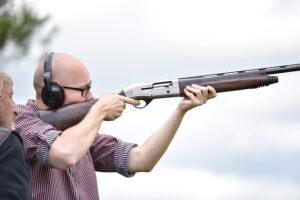 So far, I’ve only talked about strategies for dealing with cross-dominance and pistols. It’s a little bit harder to address the issue for rifles and shotguns.

With those, it’s much harder to contort the head to the gun because the stock is in the way, and most of the hardware solutions to put sighting systems in front of the eye opposite the shoulder being used are pretty specialized.

Instead, the options are generally limited to:

Cross-dominance is sometimes presented as a major shooting challenge, but as you can see, it doesn’t be hard to live with and you can still be an excellent shooter with it. If you’re cross-dominant, hopefully I’ve helped you find a few ways to work around it.

Even if you already have a solution that works for you, experiment to see if something else works better and so that you some other tools for different situations. Even though I prefer to simply shift my gun across centerline, I’ve taped my lens in the past and I still close an eye sometimes.

After you’ve had a chance to play, report back, and let us know which technique you’re using or if you’ve found something new. I’m looking forward to seeing what you’re seeing!