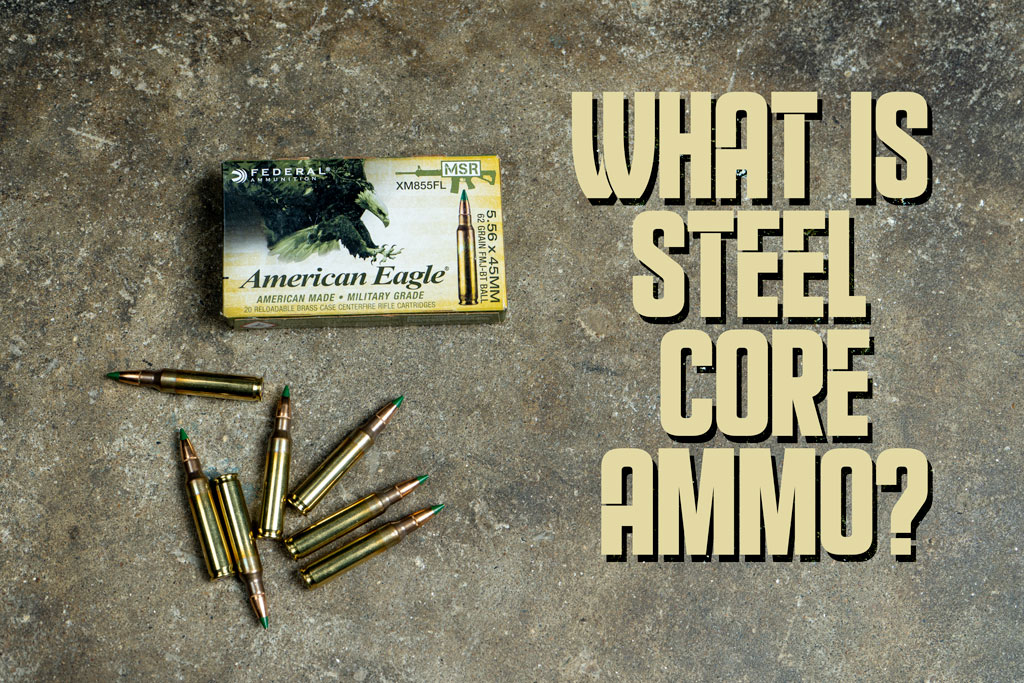 What is Steel Core Ammo?

It’s easy to appreciate why lead is the most popular metal to make a bullet out of. (Or at least its core.) Lead is extremely dense, and thus able to retain greater momentum after it has flown over long distances. Lead is soft and melts at relatively low temperatures. This means it’s easy to shape however you please. Finally, lead is cheap. If you’re saving up for your retirement by stockpiling ingots of lead, you had better have a lot of them. Enough to fill the Astrodome would be a good start.

What is Steel Core Ammo? 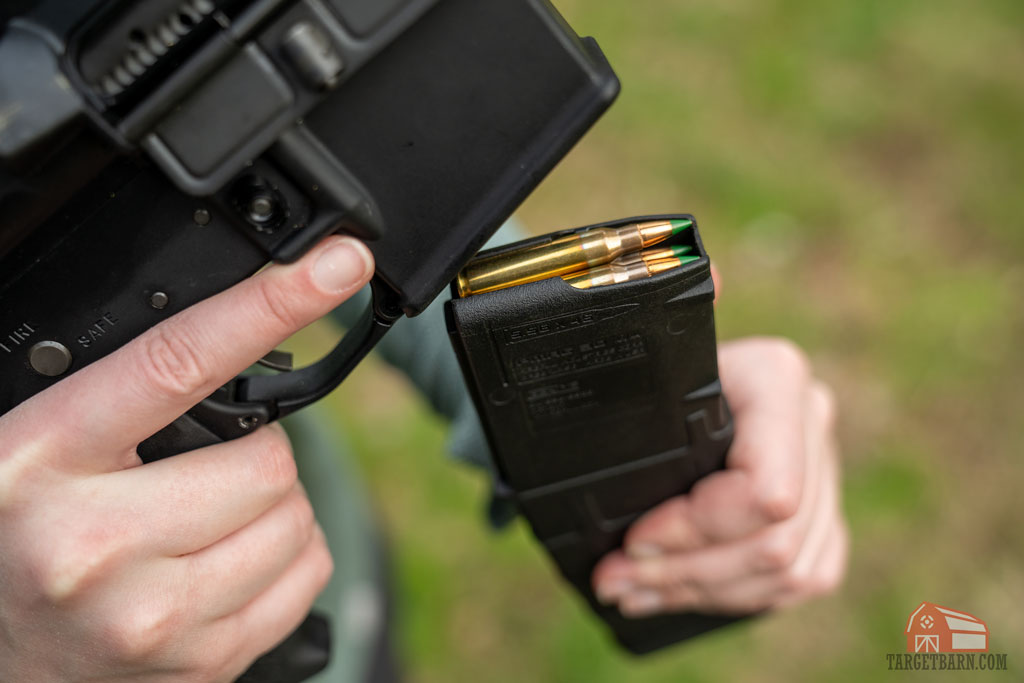 You will generally find steel in a bullet in a few circumstances. A lead core bullet with a steel jacket is not an uncommon feature for a foreign military surplus round, especially if it originated in the Soviet Bloc. (Steel’s lesser cost than that of copper makes such ammo more economical to produce, but the tradeoff is that harder steel can be harsher on a bore.) The 50 BMG’s massive bullet often sports a soft steel core with a copper jacket. But the most common place you will find steel in a bullet is in the 5.56×45 ball M855 round.

The M855 cartridge is also known as a “penetrator,” a name that offers no small hint as to what it’s designed to do. Its bullet weighs 62 grains total, and has a lead core, copper jacket, and seven grain steel tip. (It’s easy to identify thanks to its tip’s green paint.) That tip strengthens the M855 bullet considerably, which enables it to penetrate light steel targets more easily than M193. If your target is shielded by a car door, helmet, or other body armor, the M855 can help to even the odds.

The M855 bullet is less inclined to fragment than the regular M193, which lacks a steel tip. For that reason, it is considered a more humane bullet to use during international warfare. This is not to suggest that the M855 is incapable of fragmentation, however. At higher velocity penetration it is capable of yawing to fragment at its cannelure. This permits the M855 to transfer greater energy than if it had merely passed through its target. This makes it more lethal.

The M855 bullet will not pierce any barrier like it is made of melted butter. Its probability of bursting through steel drops substantially as you get farther from the target. Auto glass may deflect an M855, even at close range. In general, most shooters will tell you the M855’s effective range ends at a maximum of 1500 feet.

If you would implement M855 ammo for training or self-defense, it’s important to accommodate its longer projectiles with a faster barrel twist. A 1:7 twist barrel (where the bullet makes a complete rotation every seven inches) is advisable. A barrel with a slower twist may prove inadequate to stabilize the bullet in flight. 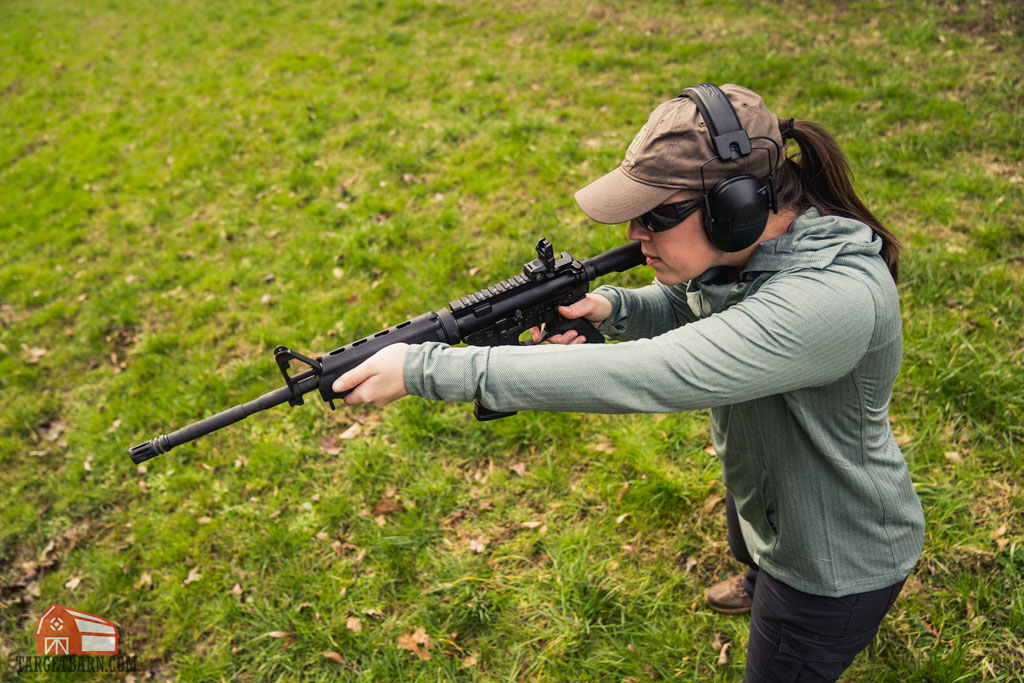 Many shooting ranges won’t let you fire ammo that has any steel in it. The reason they might ban steel casings is fairly straightforward. They want to sell the valuable brass littering their floor at the end of the day. Separating essentially worthless steel from the brass is cost prohibitive.

But why ban ammo with steel core bullets? A few reasons. Such bullets can drastically accelerate wear and tear on a backdrop, and replacing a backdrop costs quite a lot of money. Furthermore, steel core bullets are far likelier to penetrate a barrier, making a misfire even more dangerous than it has to be.

Steel core bullets have a significantly greater tendency to ricochet, and it is bad business when your shooters get hit with shrapnel at your range. Ranges already have to pay a healthy amount of money to insurance companies, as you might imagine! A steel core bullet is also likelier to create sparks when it strikes a hard surface. A rangemaster would rather not have to run out onto his range with a fire extinguisher.

Make sure your range is okay with your steel core or steel cased ammo before you bring it in. If they have a problem with steel, then it’s off into the wilderness you must go!