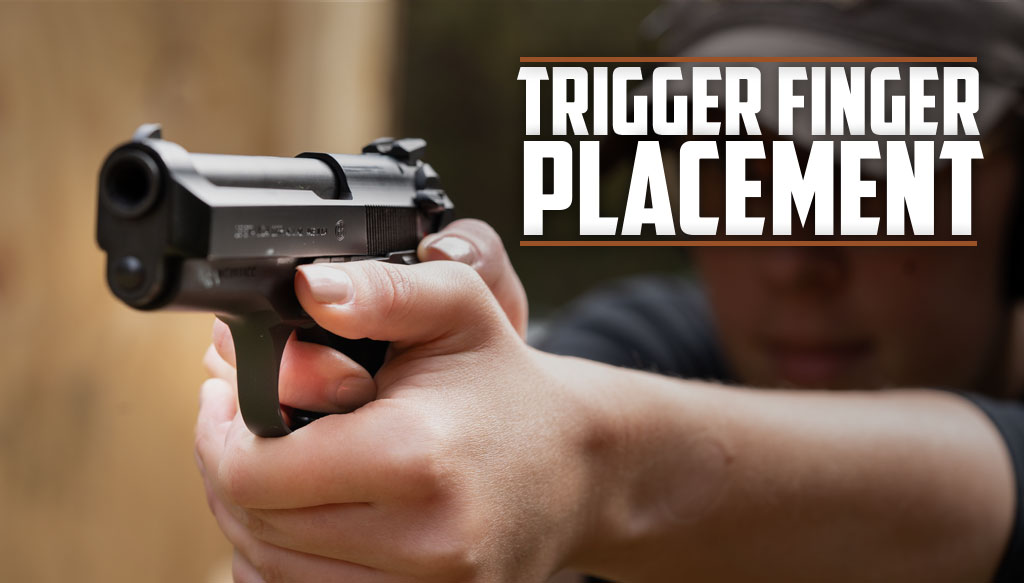 If you’ve ever taken a pistol marksmanship class, especially one based on an NRA curriculum or some kind of basic military marksmanship, I guarantee you’ve been told that you should place the pad of your finger on the trigger. I’m here to tell you something: that’s not true. I’d say “click here to find the shocking truth about trigger finger placement” but that would be some nasty clickbait.

To understand where we put our finger on the trigger, we have to understand what we’re doing when we pull the trigger. The whole point of pulling a pistol’s trigger is to carry out one goal: make the gun go off. (Or, simulate making the gun go off in dry fire). This by itself is pretty simple and doesn’t require any specific technique. Yank it with whatever digit is closest. But if we actually want to hit what we’re aiming at, then we need to apply a little technique. For the purpose of this article, and for any content you’ll see from me, the goal of pulling the trigger is to get the gun to go off without disturbing your acceptable sight picture.

The goal of pulling the trigger is to get the gun to go off without disturbing your acceptable sight picture.

I could write an entire article on the concept of acceptable sight picture, but for now let’s assume I mean “don’t move your sights off target.” Thus, the goal of pulling the trigger is to do it in such a way that the sights don’t come off target. This idea is the genesis of the concept of placing “the tip” of the finger on the trigger. It originated in rifle and bullseye pistol shooting, where heavy guns with light triggers are used, and the goal is extreme precision. In that context, engaging the trigger with the tip/pad of your index finger makes perfect sense.

The problem is that idea doesn’t hold up in the real world of striker fired guns, DA/SA autos, and DA revolvers. However, if all you’re ever going to carry is a 45 Auto 1911, feel free to ignore the rest of this article and go with God, my child.

The first thing we want to talk about is hand strength vs. trigger pull weight. Let’s say you’re shooting a DA/SA (Double Action/Single Action) auto or a DA revolver. The trigger is going to be heavy, somewhere in the area of 12-16 pounds. If your name isn’t Jerry Miculek or Ernest Langdon, that might be a lot of weight to pull with the tip of your finger.

Why Your Gun Shoots Left

Using the pad or tip to pull a long and heavy DA trigger can often result in pushing the gun to the left (for a right-handed shooter.) The pressure necessary to actuate the trigger drives the gun off target. Heavier striker fired triggers like Glocks often present a similar problem. The light weight of the pistol combined with the trigger weight and gritty travel often results in shooters pushing the gun to the left when they use the pad of the finger. This is such a prevalent problem that many manufacturers have addressed it by reducing the amount of trigger travel their striker fired guns have.

Modern striker fired guns, such as Beretta APX and Sig P320, use a fully cocked striker that has limited pre-travel on the trigger. Managing a heavy factory trigger, regardless of the gun, may require the shooter to use more than just the tip of their finger. In fact, when I’m shooting a DA revolver or DA/SA auto, I use the first joint of my index finger to pull the trigger. This is a common solution for a lot of shooters. It helps engage a longer, heavier trigger successfully by maximizing the amount of strength you can use.

There’s a good way to figure out what the optimal amount of finger to use on the trigger is. With the trigger fully pressed to the rear, look down at the second joint of your index finger. It should be at or almost at a 90 degree angle. Like the Pirate’s Code, this is just a guideline. Different grip sizes and hand sizes will interact differently with guns. However, it’s worth noting that I get about a 90 degree angle with an M9. I get the same with the LaserLyte laser training pistol.

If you were looking for a dogmatic article about how you must always put a certain part of your trigger finger on the trigger, you’re not going to find it here. As I stated above: the goal is to pull the trigger without moving the sights. We pull the trigger with our index finger because we’re descended from arboreal primates. Using the remaining three fingers to grasp the gun gives us the best possible control over our weapon. That’s also why we don’t do something goofy like pull the trigger with our middle finger, because that removes both the middle finger and the index finger from the act of gripping and firing the gun, which makes our grip worse, which then makes our accuracy, follow up, and splits worse. So unless you’re missing your index finger or it’s crippled, use it.

As far as how fast should you pull the trigger? At the risk of sounding like a broken record, pull it as fast as you can…without disturbing the sights. And when you’re done, don’t ride the reset until you feel a click or whatever. Just let that sucker go and start pulling it again. The “click” of the trigger resetting isn’t your permission to shoot again, your sights are. So don’t worry about the reset.

Pull the trigger with your finger’s pad or the first joint as fast as you can without disturbing your sights, and don’t ride the reset.