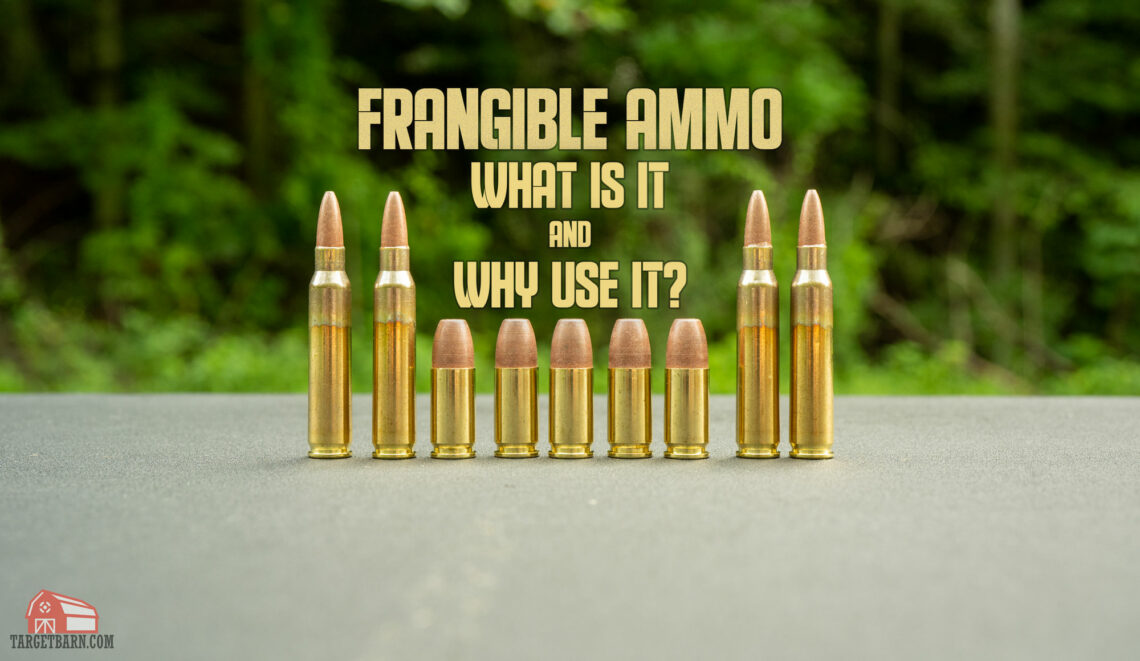 Frangible Ammo – What Is It & Why Use It?

What is frangible ammo and why would you buy it? If you’re potentially shooting or training in a close-quarters scenario, you’re going to want ammunition that’s less likely to ricochet and hit something you don’t want to hit. That’s where frangible ammo shines.

What is Frangible Ammo?

Put simply, frangible ammo uses a projectile that’s designed to shatter or disintegrate on impact with hard surfaces such as brick wall or steel plates.

Okay, actually it’s a bit more complicated than that. That’s because there are broad classes of ammunition that are technically classified as frangible. However, all of them share a common goal – reduce penetration through intermediate barriers like walls. 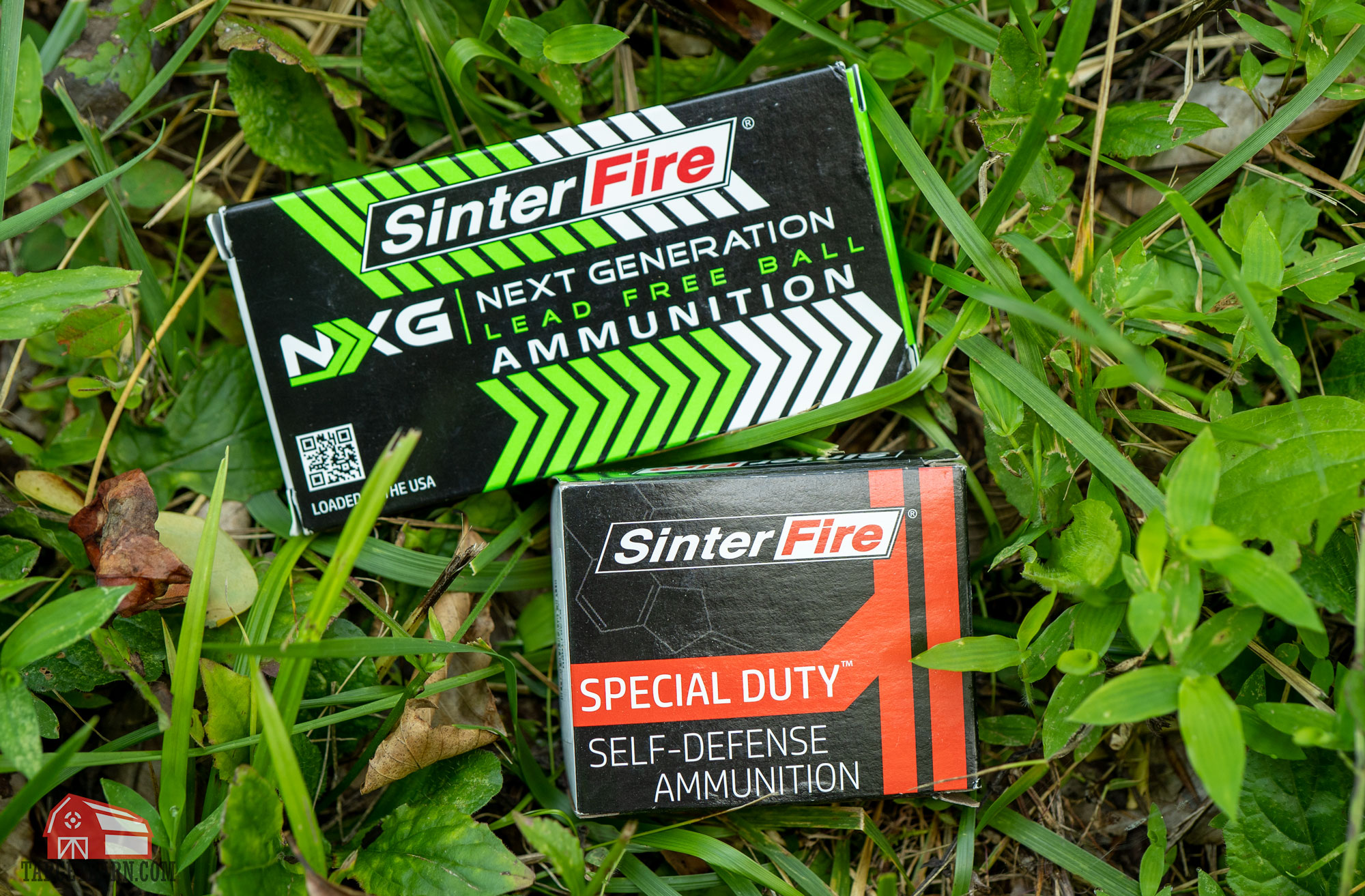 Broadly, the two types of frangible ammo are frangible training ammo, and frangible defensive ammo. The difference between the two is usually a matter of their construction and design intent.

For example, frangible training ammunition is made out of a sintered compound composed primarily of copper, tin, and other metals. Sintering is, according to Wikipedia, “…the process of compacting and forming a solid mass of material by heat or pressure without melting it to the point of liquefaction.” Basically, heat is applied to metal dust in a mold and out comes a bullet made out of the dust.

Frangible self defense rounds are a different proposition. They can be anything from a sintered projectile like the training ammo, the G2 RIP projectile which fragments into smaller pieces in tissue, or even the classic Glaser Safety Slug. The key element of a frangible round is that it breaks up on contact with “hard” surfaces. The problem becomes defining what a hard surface is, because that’s relative to the round’s construction. For example, frangible training ammo will go through a regular 2×4 just like an FMJ. A cinder block, however, will stop it. Defensive frangible is a little different, since to work as a defensive ammunition it needs to penetrate well. Most defensive frangible will defeat something like a single car door, but again – a cinder block will stop it dead.

Why Use Frangible Ammo? 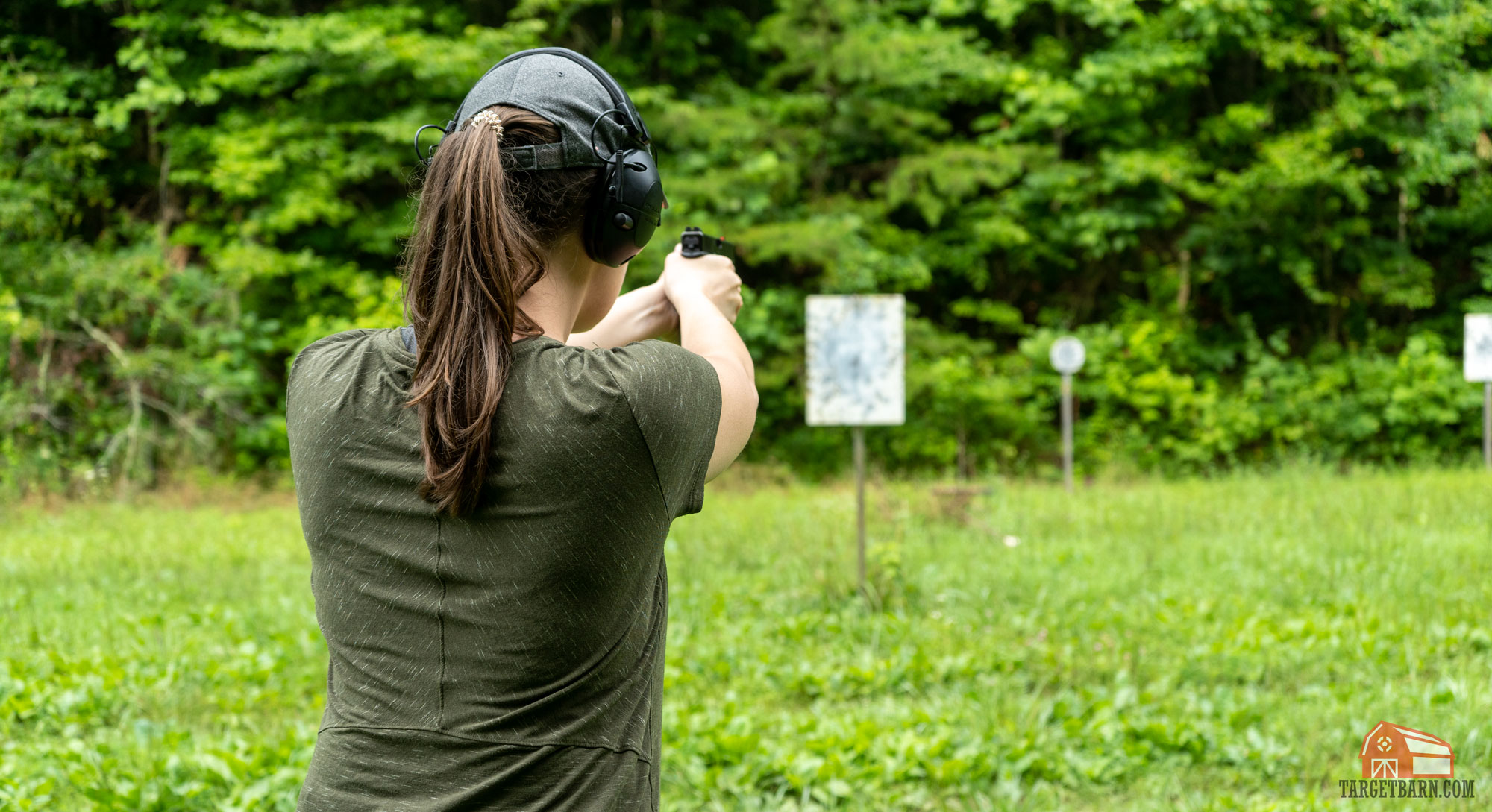 Let’s look at why we’d want to use frangible ammo in the first place. Generally speaking, frangible is lighter than equivalent lead core FMJ ammunition. For example, the USAF trains with a 100 grain frangible 9mm round, like the Federal BallistiClean 9mm, but the average consumer 9mm ammo is 115 grains.

Environmental safety is a big deal, especially to government agencies that are subject to the EPA’s purview. They consider traditional lead/FMJ ammo an environmental hazard. There are lots of complicated rules on how to dispose of it.

The second reason is physical safety. When you’re training on steel targets up close, traditional FMJ rounds can throw dangerous fragments back at the shooter, and time spent patching up injuries is time not training. Additionally, frangible ammunition facilitates safer training in confined environments like shoot houses. Some shoot houses, including ones that I’ve trained in, don’t have walls that will stop conventional projectiles, but they will stop frangible rounds.

Please note that frangible rounds are not safe to shoot at people. Humans and animals are a lot softer than steel plates or wood walls. A frangible round will act just like an FMJ when it hits a person.

Self Defense and Home Defense

Frangible defensive rounds exist for a similar reason; the first mass market frangible defensive round was the Glaser Safety Slug. It was designed to reduce the risk of penetration through light barriers like indoor walls and an airplane’s skin. The Glaser features a pre-fragmented jacket around a core of either #12 or #6 birdshot, that on impact with a person breaks up. The entire load of birdshot dumps directly into the target. We’ll talk more about Glasers later, but the idea here was the same – if a Glaser misses its intended target, it breaks up on impact with a hard surface, and the tiny pellets lose their velocity rapidly.

Frangible Ammo for Self Defense 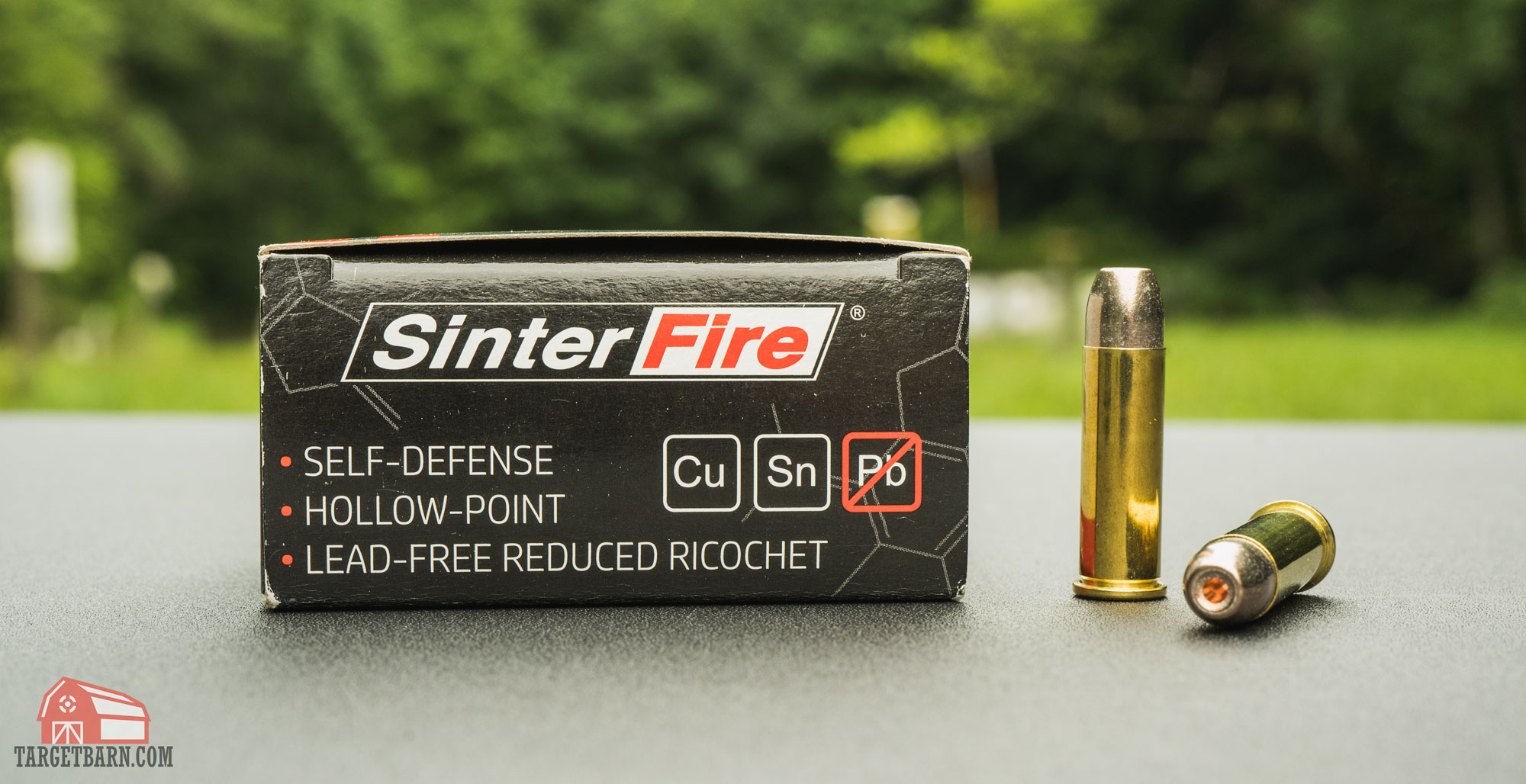 Can you use frangible ammo for self defense? The question comes up more often in times when ammo supply is lacking. It makes sense. If you need to protect your home or family and all you can get is 100 grain frangible practice rounds, you want to know if it will do the job.

Types of Frangible Ammo for Home Defense and Self Defense

Earlier we discussed the difference between frangible training ammo and frangible/fragmenting defensive ammo. To briefly recap: frangible training ammo is made from metal dust and shatters back into tiny dust particles when it hits a hard surface like a steel plate or brick wall. Frangible defensive ammo, like Glaser Safety Slugs or G2 RIP fragments inside of tissue, sending petals or secondary projectiles out to create their own wound cavities.

Let’s look at how these types of frangible ammo stack up for home defense and self defense.

First, why might somebody use frangible training ammo for self-defense? The most likely reason someone would use this is because of a seriously picked-over ammo market. It’s hard enough to get FMJ, much less premium hollow points like Federal HST or Speer Gold Dots.

Well, here’s the good news: a frangible training round is extremely dangerous. This is because of how the technology works. For a sintered frangible round to fragment, it has to hit an object that’s as hard or harder than the projectile. People are not as hard as sintered copper/tin bullets, so a frangible training round acts like an FMJ if it hits tissue. Small wound channel, loads of penetration. They won’t defeat a windshield and might not defeat a car door, but they’ll certainly zip through drywall or a person.

So, if frangible training ammo is your only choice, it’s about on par with FMJ, and better than a sharp stick in the eye. Interestingly, it might be better than the pre-fragmented projectiles we’re about to discuss next.

Previously we talked about the pre-fragmenting self defense projectiles like the famous Glaser Safety Slug, the modern G2 RIP round, and a few others. These are technically frangible rounds, which when they hit something harder than their construction will reduce the change of ricochets and over-penetration. In theory, since they’re designed for self defense, they should be pretty great at that, right? Well, not so fast. Handgun projectiles cause damage by hitting tissue. That means they have to penetrate deep enough to actually hit vital structures and retain enough energy to damage those structures by physically passing through them.

Glaser Safety Slug for Self Defense

We’re fortunate that we can look at real world performance data for the Glaser Safety Slug to see how it stacks up in real world defensive shootings, and unsurprisingly the results are mixed. The only situations where it’s clearly effective have been in unobstructed frontal shots to the upper thoracic cavity. In those instances it did perform as advertised and incapacitated the attacker rapidly.

However, it’s worth noting that in that exact same situation, any modern hollow point would have been equally effective. The Glaser also looks spectacular in bare ballistic gelatin, but fails the FBI performance test.

G2 RIP for Self Defense

What about the G2 RIP round then? Unlike Glaser, we have no documented real world shootings with it, because thankfully no LE agency has adopted it. However, there’s a considerable volume of ballistics tests with this round, and in all quality tests it has failed the FBI protocol.

The problem with a round like RIP is that when it performs as designed and fragments, none of the secondary projectiles have sufficient energy to penetrate deep enough to cause rapid blood loss. Theoretically, it would probably work just as well as a Glaser in an unobstructed frontal chest shot, but so does a 9mm HST in that circumstance.

The RIP and Glaser’s performance are typical of pre-fragmented defensive rounds. They all tend to under-penetrate and won’t defeat any intermediate barrier material.

As you can see, the primary use for any type of frangible ammunition is to increase safety for bystanders and the shooter. Military and LE agencies have used frangible training ammo for years now. It has proven to be accurate, reliable, and safer for training use. Limiting lead exposure is always a good idea, as is reducing the potential for ricochets or other accidental injuries.

As far as frangible self defense ammunition goes, well, in a twist worthy of M. Night Shamalamadingdong or whatever that guy’s name is, it turns out that frangible training ammo is a better choice for personal defense than frangible or pre-fragmented self defense ammo. Remember, when selecting a pistol round for self defense, accuracy is king, and penetration is queen. Everything else is nice to have, and if your super bullet breaks up into tiny projectiles that don’t actually reach the vital organs, your round isn’t really effective, is it?