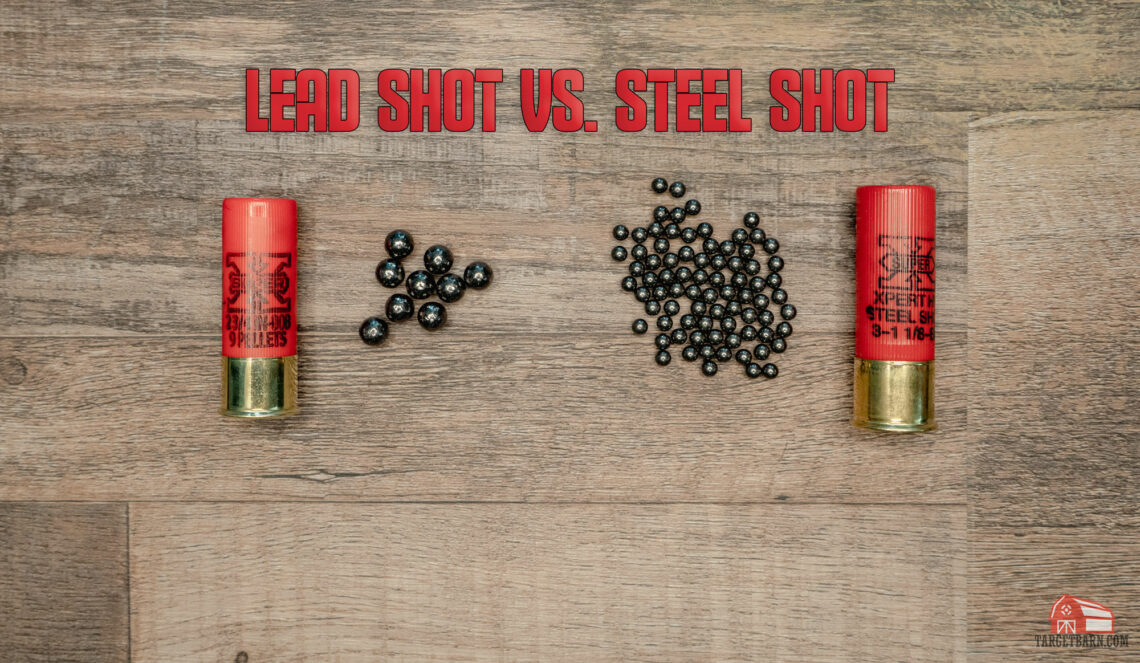 New shotgun shooters often ask what the difference is between lead shot vs. steel shot. Not all shotshells are created equal. They can contain everything from rat shot for killing rats to buckshot for killing bucks (or neutralizing immediate threats to your personal safety). Some shells have a single slug that can drop a Rocky Mountain elk like it was algebra class.

A shell’s shot size, gauge and length are all surely important. However, one of its most defining qualities is which kind of metal its shot is made of: lead, or steel (or tungsten or bismuth, which we’ll talk about in a future article).

Newer shooters often wonder about the differences between lead shot vs. steel shot, and why they should choose one over the other. We’re going to give you the 411 on the two types of shot pellets. After this, you’ll know exactly which one you’ll need!

Lead is an excellent metal for firearm projectiles. It is dense, which lets it acquire the momentum it needs to fly farther and hit harder downrange. It excels at retaining its shape. Lead is also inexpensive. (Fellas, don’t get your old ladies any lead jewelry for Valentine’s Day.)

Lead’s outstanding qualities have made it the standard metal used to make the shot pellets. But as you well know by this point, lead is not the only metal used to make shot. Steel is the second most popular alternative, despite having a significant performance disadvantage in comparison to lead.

So why do steel shot pellets exist? Because steel, unlike lead, is nontoxic.

Environmental lead contamination is a vicious cycle, and multiple wildlife populations declined because of it. This is why the U.S. Fish and Wildlife Service (USFWS) banned the use of lead shot for waterfowl hunting in 1991, and also why the agency banned lead-based ammunition and fishing tackle from all 568 million acres of the land and waters it manages in 2017.

In fewer words, the U.S. federal government has deemed steel to be the eco-friendly alternative to lead shot. Whether or not you condone that decision falls within the purview of your personal political and philosophical beliefs, but don’t test the federal government on the matter. Getting caught with lead ammunition on USFWS managed land often incurs a $1,000 penalty and – worse yet – shotgun confiscation.

Calling lead shot “better” does overlook its toxicity to wildlife, which you can at least agree is essential to recreational hunting. That aside, lead really does do a better job at being a shot pellet than steel.

Lead owes its superior ballistic performance to its aforementioned higher density. The heavy metal typically has a density in the vicinity of 11 g/cc (meaning one cubic centimeter weighs 11 grams). In contrast, steel’s density usually falls in at around 8 g/cc.

Lead’s ~38% higher density confers its primary performance advantage over steel: greater momentum. To fully appreciate this, suppose Jacob deGrom of the New York Mets insisted on throwing your choice of objects at your head. You can choose between a regulation baseball or a baseball-sized wad of dryer lint.

Assuming you want to live, you pick the lint ball. Despite being the same size and thrown at the same speed as the baseball, you know lint’s lower density will prevent your skull from getting the same treatment as a jack-o’-lantern on November 1st.

Now apply that same reasoning to shot pellets. Denser lead shot is going to retain significantly more of its starting velocity at any point throughout its trajectory. Lead’s greater weight also equips it to transfer more kinetic energy to its target during impact.

All of this is why lead shot strikes game harder and penetrates it more deeply. In addition to being deadlier, lead does a more authoritative job of smashing clay targets. Furthermore, softer lead is gentler on a barrel than more abrasive steel and thus suitable for antique shotguns, and it is also less likely than steel to ricochet back toward the firing line after hitting a hard surface.

Ballistics aside, steel does offer a distinct performance advantage over lead: tighter pattern density. Relatively soft lead shot pellets, like the Winchester Super-X 12GA #1 Buck, are inclined to deform under the intense pressure of ignition. The less spherical the shot pellet, the more air resistance it is set to encounter in flight. This is why deformed lead pellets spread out wider and wider the farther they fly downrange. But steel pellets are too rigid to deform, and they accordingly fly in a more efficient (i.e. concentrated) pattern.

Steel shotshells, like the Winchester XPERT 12GA #7 Steel Shot, typically have higher muzzle velocities. This compensates for steel shot’s lower density by simply making it go faster, although a higher muzzle velocity does come at the cost of heavier recoil (assuming all other factors remain equal).

So, which should you buy when you’re shopping for 12GA ammo? You should use nontoxic steel shot when legally required. But wherever lead shot is legal, its superior ballistic performance makes it the vastly better choice for hunting!