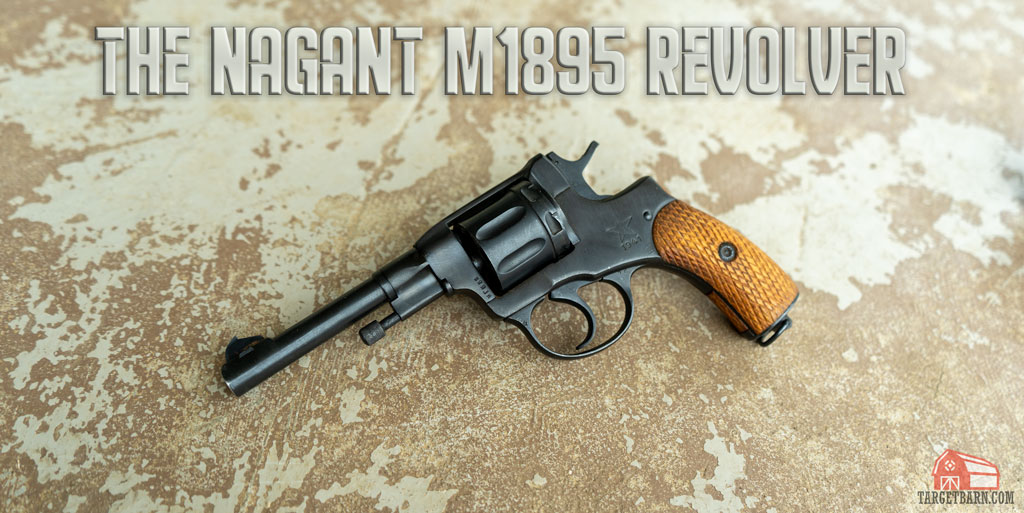 A lot of shooters go through a military surplus or Curio and Relic phase of their gun ownership. Often, this is because said shooters is young and broke, and milsurp guns are cheap. For example, when I was a kid you could get an SKS for 99 bucks. Younger Millennials remember $79 Mosin-Nagant rifles; and we all bought a CZ-52 because it was like 150 bucks.

One of the mainstays of the milsurp market is a Nagant, but not the rifle. With over 2 million revolvers made, the 1895 Nagant revolver is not only a popular surplus item, it’s still being picked up on battlefields and crime scenes.

Of course, if someone is familiar with the 1895 Nagant, the first feature they think of is that unlike any other mass-produced revolver, it can be effectively suppressed. When fired in double action, the Nagant’s cylinder cams forward so that the mouth of the chamber comes flush with the forcing cone. This eliminates the cylinder gap. This also happens when the hammer is manually cocked.

The Nagant’s 7.62x38R cartridge features a projectile seated deeper than you’d see in a conventional wadcutter. The “empty” space in the brass neck of the cartridge protrudes into the forcing cone, completing the gas seal. Contrary to internet lore, this largely pointless feature wasn’t put on the Nagant to allow it to be suppressed. But rather, it’s there to improve accuracy and decrease fouling.

Once it was discovered that the revolver could be suppressed, it was used in that role, most notably by the KGB during the Cold War, and by Vietnamese guerrillas during the Vietnam War. A prominent captured example lives in the CIA Museum. There are also a number of videos of people shooting the Nagant suppressed.

Why the Nagant Revolver Kind of Sucks 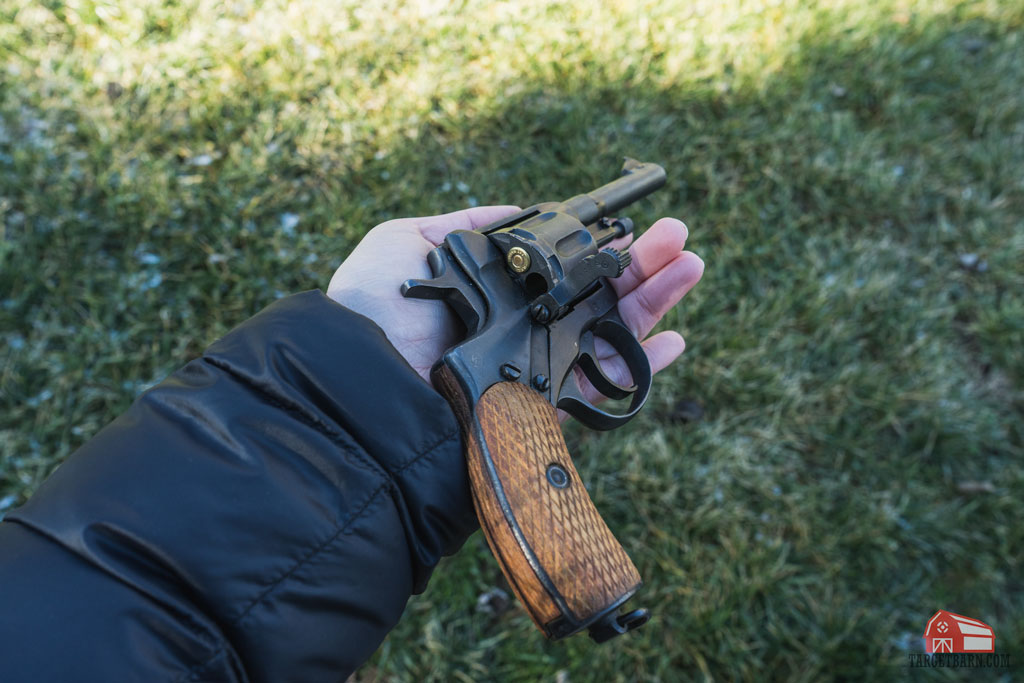 However, when you take away the Nagant’s party trick, what you’re left with is a rather shoddy revolver. Sure, the Nagant had 7 shots. This wasn’t a feature that any other service revolvers at the time sported. But the trigger is…well it’s just the worst trigger ever. The sample I owned during my Poor Person phase had a double action trigger pull that measured over 20 pounds, and a single action trigger pull that was north of 10 pounds. By comparison, a brand-new S&W 686 has a 14-16 pound double action pull, and a 3-4 pound single action pull.

Also, unlike its contemporaries from Colt, Smith & Wesson, and Webley, the Nagant’s cylinder featured a loading gate and ejector rod, like a Colt Single Action Army. That was an innovative feature in 1870, but by the early 1900s was hopelessly obsolete.

And don’t even get us started on the Nagant’s cartridge, 7.62x38R. When the Russians adopted the Nagant revolver, the other major powers service revolvers were chambered in 45 Colt (USA) and 455 Webley (Great Britain). The Russians chose a .30 caliber 97 grain bullet doing about 1000 feet per second, which is cool when it’s called “32 H&R Magnum” and comes in a gun with a good trigger pull, but when it’s made by Communists…isn’t as cool.

I shouldn’t dog the 7.62x38R round too much, though. It has a 100% stop rate when applied directly to the back of a dissident’s skull.

Durability of the Nagant Revolver 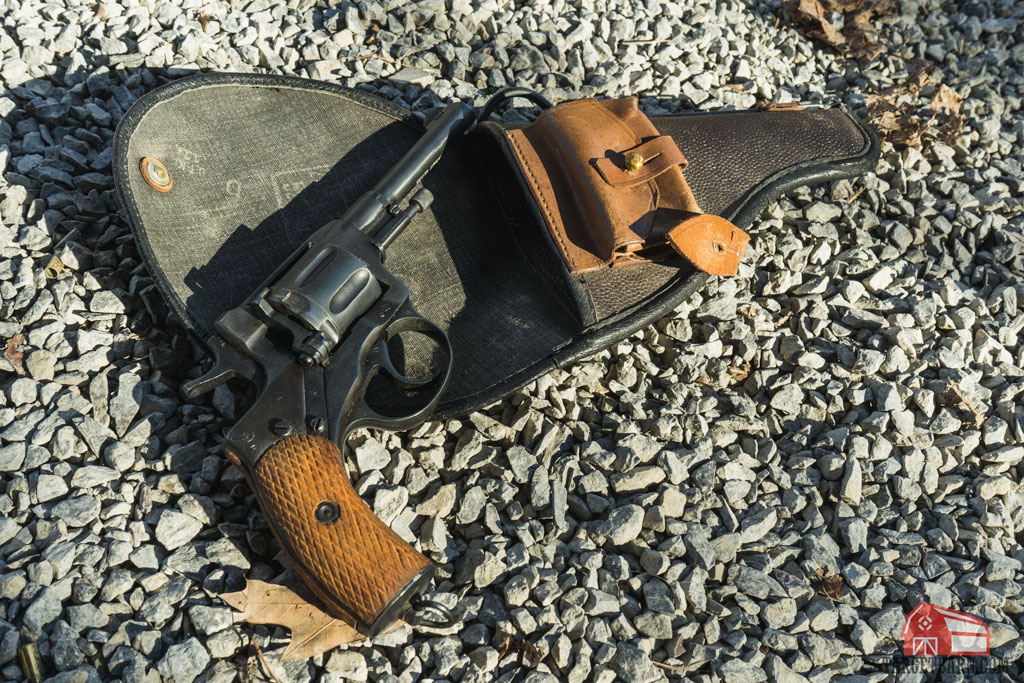 The real legacy of the M1895 Nagant is its impressive durability. The Russians produced it in two models: a DA/SA model for officers and NCOs and a single action only version for low-ranking enlisted personnel. The military deemed the SA only modification necessary to keep uneducated troops from wasting ammo with too much rapid fire; a feat I would personally find impressive given the awful nature of the Nagant’s DA trigger. As a fun aside, the SA only Nagants are also specifically mentioned in the Single Action Shooting Society’s rule book as legal for Cowboy Action Shooting.

Back to the durability – the features like mainspring made out of tractor leaf springs, the simple loading gate, and the generally rough nature of the gun made them incredibly long-lasting. The Russian private security service retired the last Nagants in 2009, and they’re still picking them up off the ground in Middle Eastern war zones. In 2015, a French tactical team killed an Islamic terrorist and found a fired 1895 Nagant on his person. The design of the revolver is simple and robust.

Today in the West, the Nagant revolver is a collector’s curiosity item. The ability to fire suppressed attracts people who are interested in NFA items. And of course, anyone who collects Russian militaria needs one. If you want to buy a Nagant revolver, GunBroker.com will be your best bet. Prices have increased since I owned one, with shooter-grade samples running around $250. I saw several nice samples in the $500+ range. Some collector’s items with desirable proof marks are running for over $1,000 at the time of writing this article. There’s no doubt that the Nagant will be with us for a long time.

At the beginning of the article, we said that over 2,000,000 Nagant revolvers had been made. That’s just a rough estimate, because during WW2 the Soviet Union was cranking Nagants out by the bushel. Shockingly, they weren’t exactly good at record keeping. We’ll all probably be using magnetic pulse rifles and some shepherd in the Kyber Pass will still be packing his great-great-great-grandfather’s Nagant revolver.