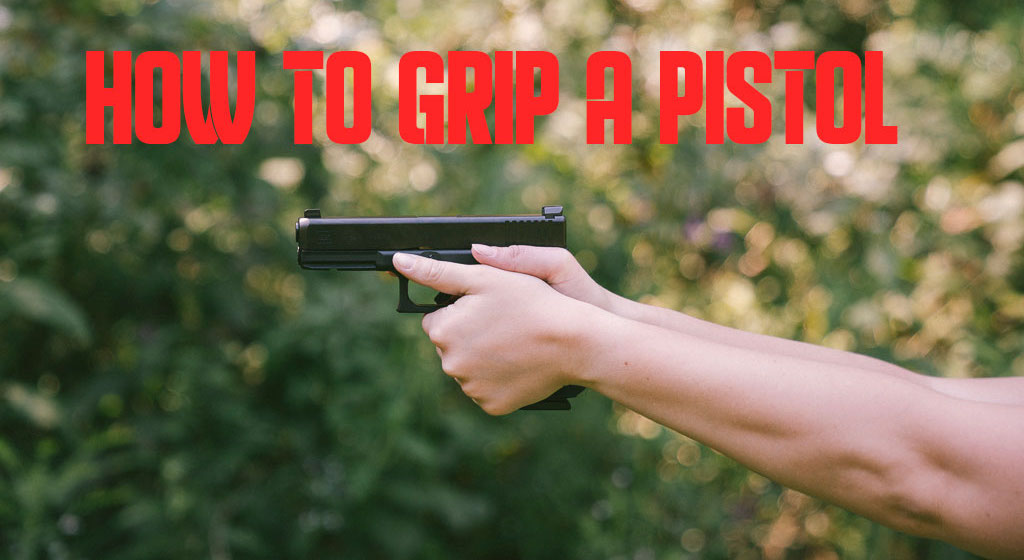 How to Hold A Pistol – Demonstrating Proper Pistol Grip

There are four things every male on this earth thinks he knows how to do well: drive a car, throw a punch, shoot a gun, and…well you can probably guess the last one.

The truth is that all four of those activities require, at a minimum, quite a lot of practice and maybe even some professional instruction to get good at them. The better news for you is that I’m an expert in 50% of those areas, and today we’re going to be talking about one of them: shooting a gun. I’ll let you wonder about which of those other four topics I’m expert in, and get on with the gun related one. Specifically, I want to focus on the most basic part of shooting a handgun: how you hold it with a proper pistol grip.

How to Hold a Handgun

Commonly referred to as “gripping” the gun, or your grip, holding the handgun has exactly one purpose, which is to get the gun to do what we want it to do. That’s it. There’s no secret or anything like that, we hold on to the gun because we want it to behave. How we want the gun to behave will decide how we grip it. For example, if you don’t care about things like “recoil control” or “fast, accurate hits” you can pretty much hold the gun however you want. But if you do care about actually being good at shooting, then there is a certain way you’ll want to wrap your hands around the pistol.

In order to get the gun to behave the way we want it to, there are three principles we want to maximize. The first is leverage, the second is surface contact area, and the third is pressure.

The first principle of grip is leverage. If you look at a handgun, regardless of whether it’s an auto or a revolver, the bore axis is always going to be higher than the highest part of the grip (with a few weird exceptions). Thus the gun will always have a leverage advantage over the shooter. Our goal is to eliminate as much of the gun’s leverage advantage as possible. All semi-automatic pistols have some kind of backstrap and tang/beavertail. To eliminate as much of the gun’s leverage as possible, take your dominant hand and get it as high on the backstrap as possible. In broad terms, you want to have the web in between your thumb and index finger pressed as deeply into that tang area as you can get it. 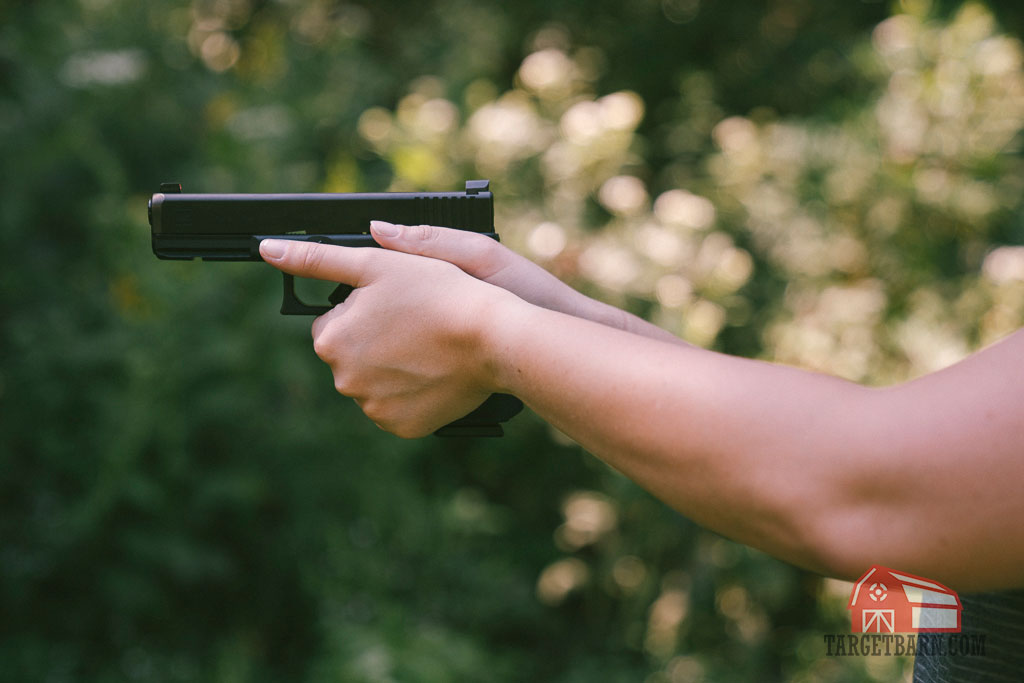 The second principle of grip is a phrase I stole from the great and powerful Ernest Langdon: “surface contact area.” That is a smart person way of saying that I want to get as much of the meaty bits of my hands in contact with as much of the gun’s gripping surface as possible.

Don’t quite get it? Look down at your hands. On your support hand, find the bit of your thumb and palm that kind of looks like a chicken wing. Don’t bite it, it isn’t a drumstick. Now look at your dominant hand thumb. That slight inward curve after the middle knuckle but above the base knuckle, do you see it? Cool. Bring your palms together with your weak hand slightly further forward so that the base knuckle of your support hand thumb fits neatly into that curve on your dominant hand. That is roughly how your hands should be positioned, just with a gun in between them.

The third principle is pressure, which is how hard you should grip the gun. The most efficient way to max out the grip pressure is to use tension in your pectorals and back to squeeze the gun laterally, since those big muscles will take longer to fatigue than your forearms and can exert a ton more pressure. But don’t neglect pure grip strength either! There are a lot of silly colloquialisms out there about using 60/40 grip pressure or handshake firmness or something like that. Just grip the gun as hard you can without making it tremble. Easy stuff.

Also, don’t neglect your pinky finger on your dominant hand! Putting pressure on the gun with the pinky finger can be a huge benefit to reducing recoil, which I’d like to say I thought of myself after hours of research, but I actually stole from Scott Jedlinski.

If you apply the three key principles of grip, you should be able to set up a serviceable handgun grip that will help you manage recoil and bring the gun quickly back on target. However, there’s only so much you can learn from an article and some pictures. Which is why the best place to learn something like this is a class. The two instructors I mentioned, Ernest Langdon and Scott Jedlinski, would be great people to learn from. There are quite a few other great, reputable instructors out there as well who teach a phenomenal grip. Just make sure you do your homework before you sign up for a class! Once you’ve grasped the techniques for a proper pistol grip, grab some ammo and head to the range to practice!