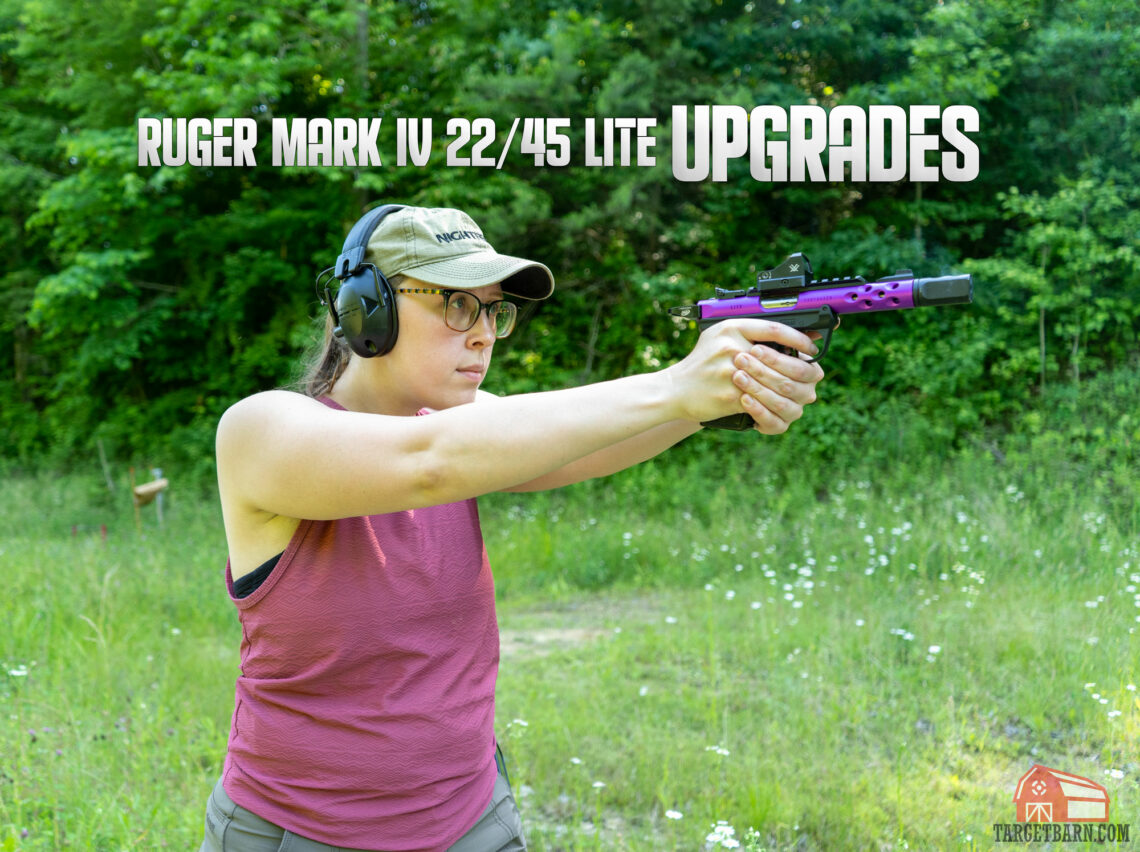 There are many Ruger Mark IV 22/45 Lite upgrades available for the small, lightweight .22LR pistol. Although it is a great pistol out of the box, the gun’s aftermarket upgrades can benefit a shooter’s speed and accuracy. 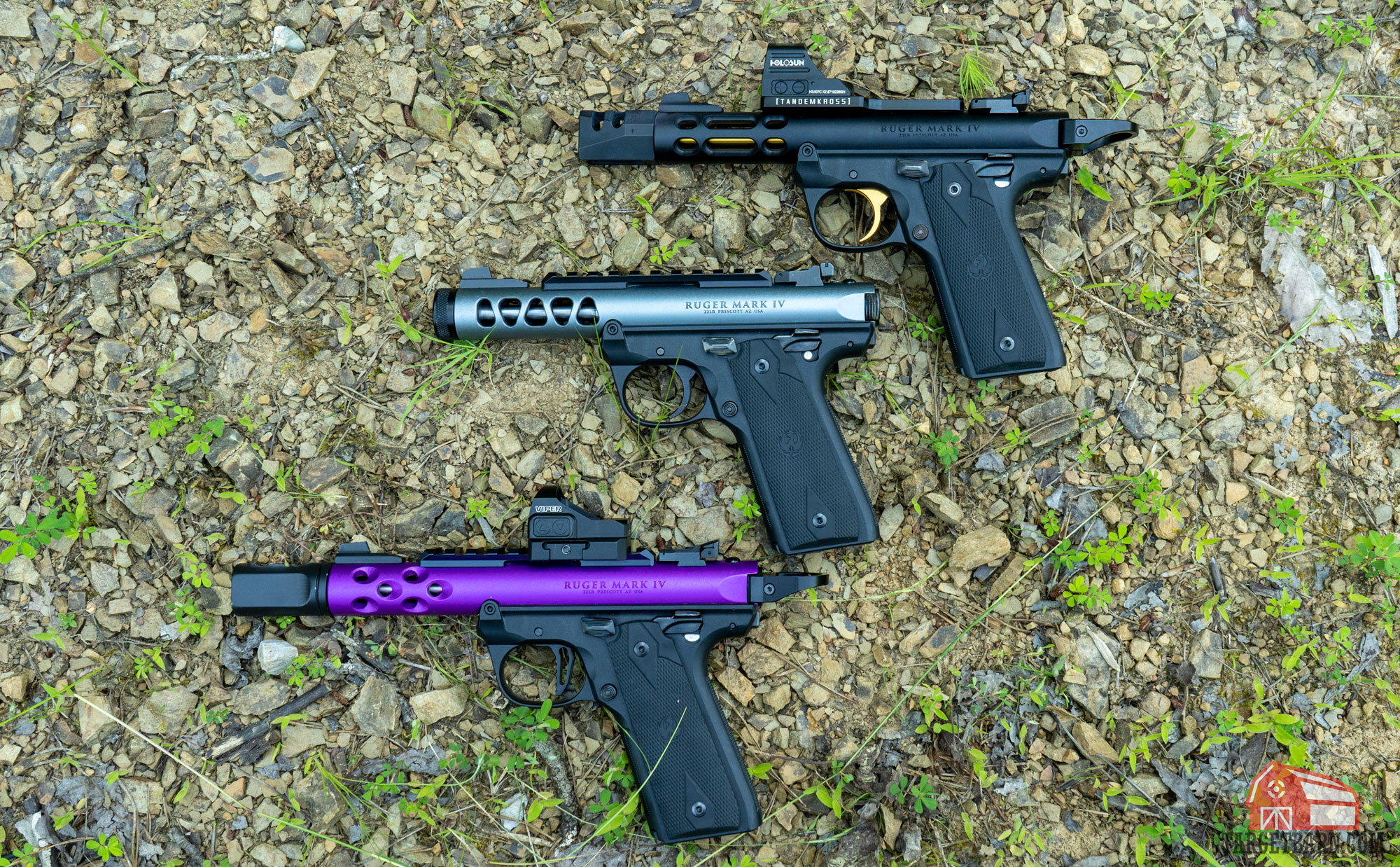 In our Ruger Mark IV 22/45 Lite review, I explained the pros and cons of the Mark IV 22/45 Lite. The cool thing about the Mark IV Lite, is that for nearly every downside the gun has, there is an aftermarket upgrade to fix it. There are several companies offering aftermarket parts, and today we’re going to look at the upgrades that are worth doing.

Keep reading to see why we recommend these upgrades and many more.

This article contains affiliate links which means if you make a purchase, we may receive a small commission to help offset the cost of testing and reviews.

First let’s look at the two trigger upgrades you can make to improve the trigger pull on the Mark IV 22/45 Lite.

The stock trigger on the Mark IV 22/45 Lite leaves much to be desired. It is a heavy and gritty pull, typically around 5lbs. The Volquartsen Accurizing Kit is a drop-in trigger parts kit that gives the gun a light, crisp 2.25lb trigger pull. It also eliminates the magazine disconnect. This drop-in kit comes with a disconnector, target hammer, hammer bushing, and target sear — basically the parts that control how the trigger pull feels. The kit is available with and without a trigger face. This means you can use the gun’s stock trigger, a trigger from the Accurizing Kit, or a different aftermarket trigger.

While the Volquartsen Accurizing Kit is available with a trigger, I decided to pass on it and instead use the Victory Trigger from Tandemkross. The Victory Trigger is flat-faced, making it similar to the 1911 style trigger that I would expect from the 22/45 line of Mark IV pistols. It is textured for better control and is a skeletonized, lightweight design.

Some shooters prefer the stock, curved trigger. However, if you like a straight trigger that aids in a straight-back pull, I recommend the Victory Trigger.

Of all the Mark IV 22/45 Lite Upgrades to make, switching out the grips is one of the easiest. Aftermarket grips can help you get a better grip on the gun. Which grips you go for are going to depend on whether you like finger grooves or not.

If you like finger grooves on your grip, the two best options to choose from are the Hogue 79080 Ruger MKIV 22/45 Rubber Grip, or the Tandemkross hiveGrip. Both have finger grooves and are textured for a better grip. If you’re looking for the budget option, the Hogue grips are the way to go.

Shooters who don’t like the finger grooves but still want to upgrade the grips on the Mark IV 22/45 Lite should check out the Tandemkross hiveBrid G10 Panel Grips. The hiveBrid grips are made of G10 material that are aggressively textured with a rubber-like material giving the shooter a solid grip. 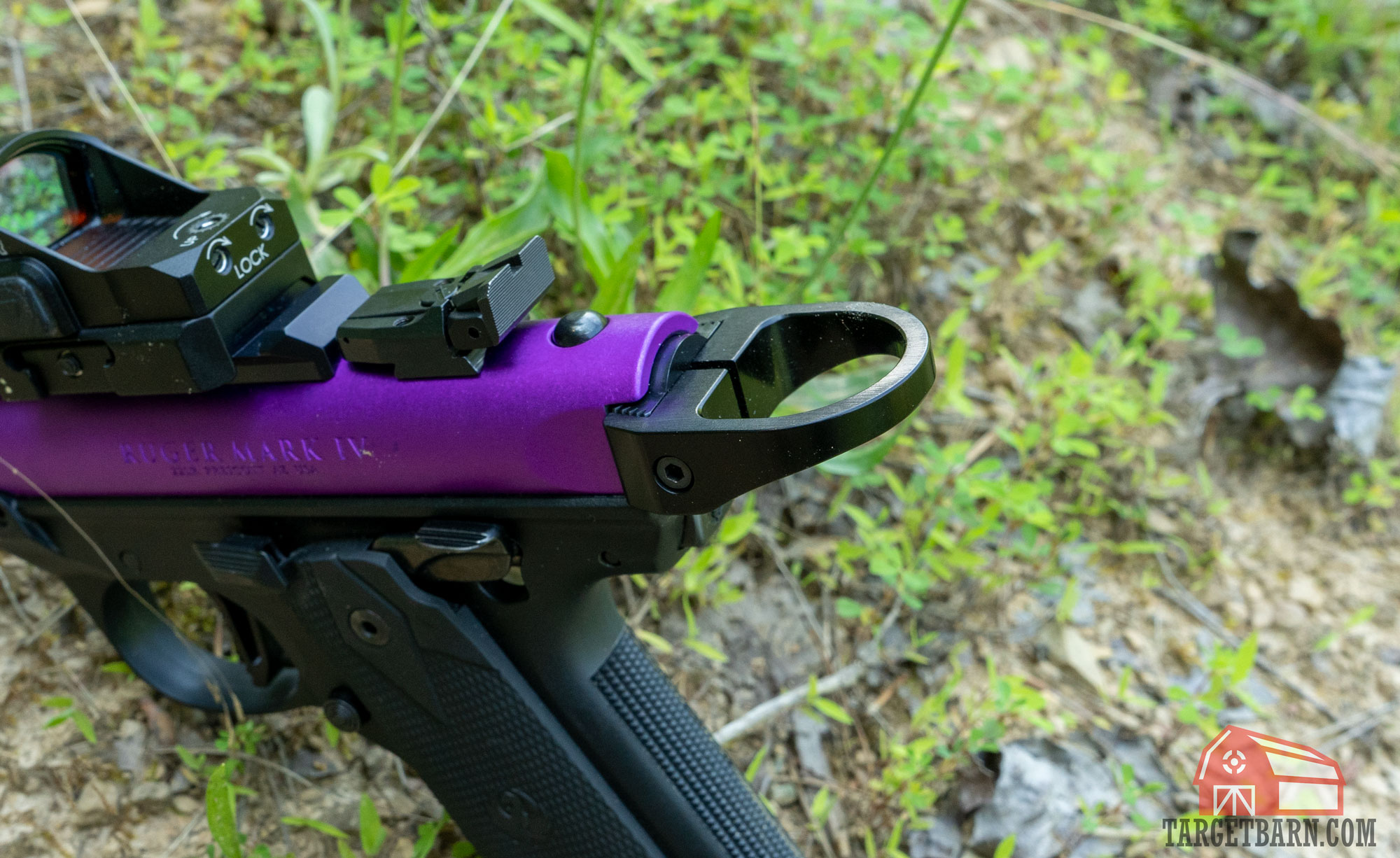 In order to cycle the bolt on the Mark IV pistols, the shooter must grab the bolt ears with their fingers. This can be tricky when trying to quickly chamber a round or clear a malfunction. I’ve found that my fingers easily slip off the bolt ears, especially when my hands are sweaty from shooting in the heat. Young shooters and any shooter with dexterity issues will likely have trouble manipulating the bolt. That’s why the halo Charging Ring from Tandemkross is a necessity. 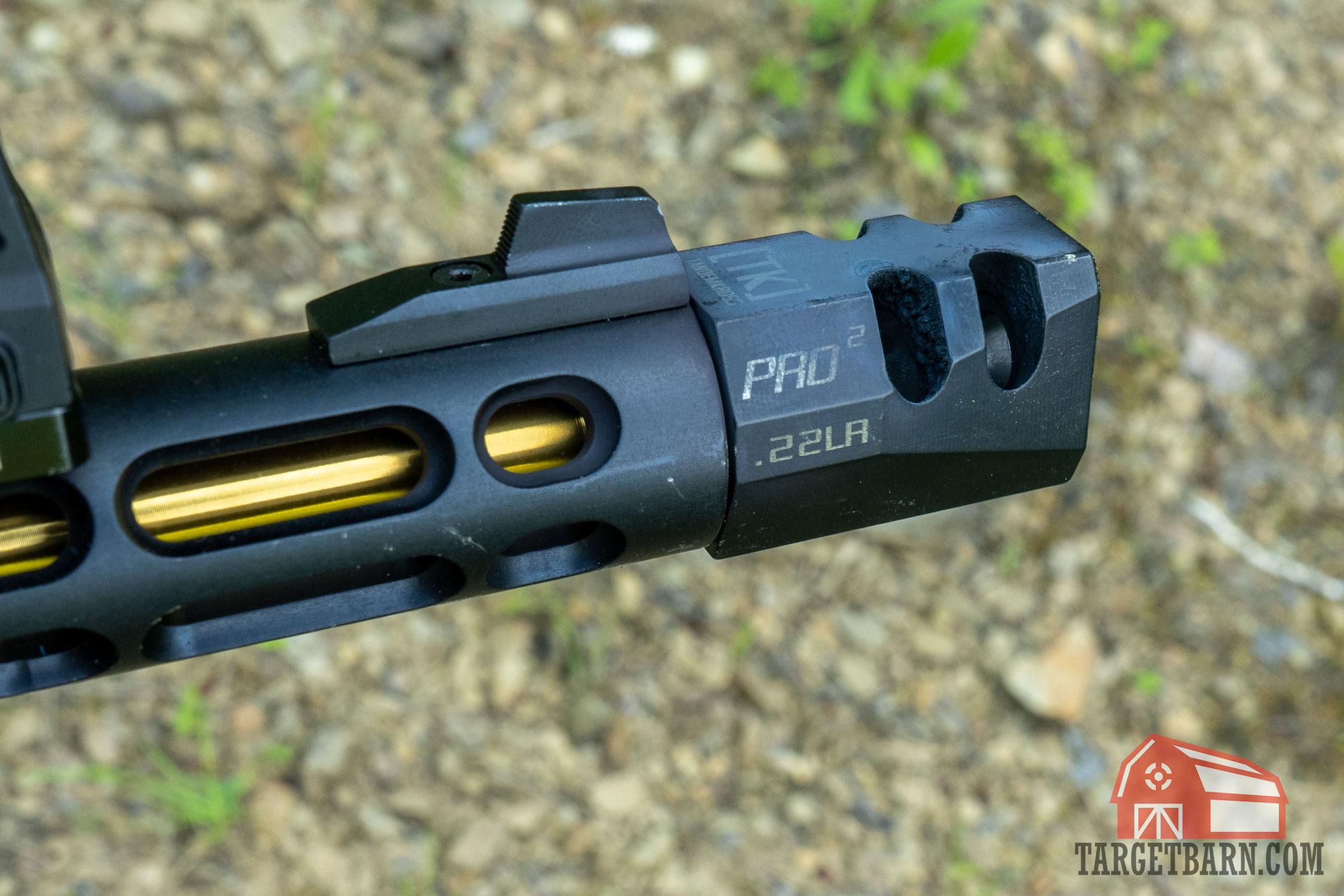 The Mark IV 22/45 Lite comes with a threaded barrel. If you’re not mounting a suppressor, then a compensator is a great addition to the gun. A compensator is a device that a shooter attaches to the barrel of their gun to redirect the gases released when shooting a round. The purpose of redirecting those gases is to reduce recoil and muzzle rise. The weight of the compensator also mitigates recoil. Even though guns chambered in .22LR typically have small amounts of muzzle rise, shooters want to reduce any bit they can when shooting quickly between targets, like in Steel Challenge matches.

Tandemkross offers the Game Changer PRO Compensator for guns chambered in .22LR. It vents gases at dual 45 degree angles so the gases don’t interfere with the shooter’s visibility. It easily screws onto the threaded barrel of the Ruger Mark IV 22/45 Lite.

The Mark IV 22/45 Lite comes with a Picatinny rail installed for shooters to mount an optic. The only issue with this is that the rail adds a good bit of height to the optic which can detrimentally affect a shooter’s accuracy. An aftermarket optic mount can reduce that height, putting the optic closer to the barrel.

The “Shadow” Mount V2.0 from Tandemkross replaces the Mark IV’s picatinny rail and is compatible with over ten popular red dots. Another option is the Allchin Gun Parts Ruger MK Micro Mount. At 0.77 ounces, it is slightly lighter than the Shadow which weighs in at about one ounce.

Next let’s look at some upgrades on the controls of the Mark IV 22/45 Lite.

In my review of the Mark IV 22/45 Lite, I mentioned that the thumb safety on the Mark IV Lite is not comfortable to rest your thumb on. Tandemkross also saw this issue and designed the Cornerstone Safety Thumb Ledge. It is an oversized 1911-style safety ledge that improves grip and control.

Striplin Custom Gunworks designs the Thumb Rest for the Ruger Mark IV 22/45 Lite. The Thumb Rest sits in front of the bolt release and is for the shooter’s support hand thumb. It helps the shooter get a better grip on the gun and gives more control for follow up shots.

The factory magazine release on the Mark IV 22/45 Lite can seem small when trying to quickly reload. The Titan Extended Magazine Release from Tandemkross is taller and wider than the stock release. It is available in a paddle style and button style and is a great upgrade for shooters who may have dexterity issues or smaller hands. 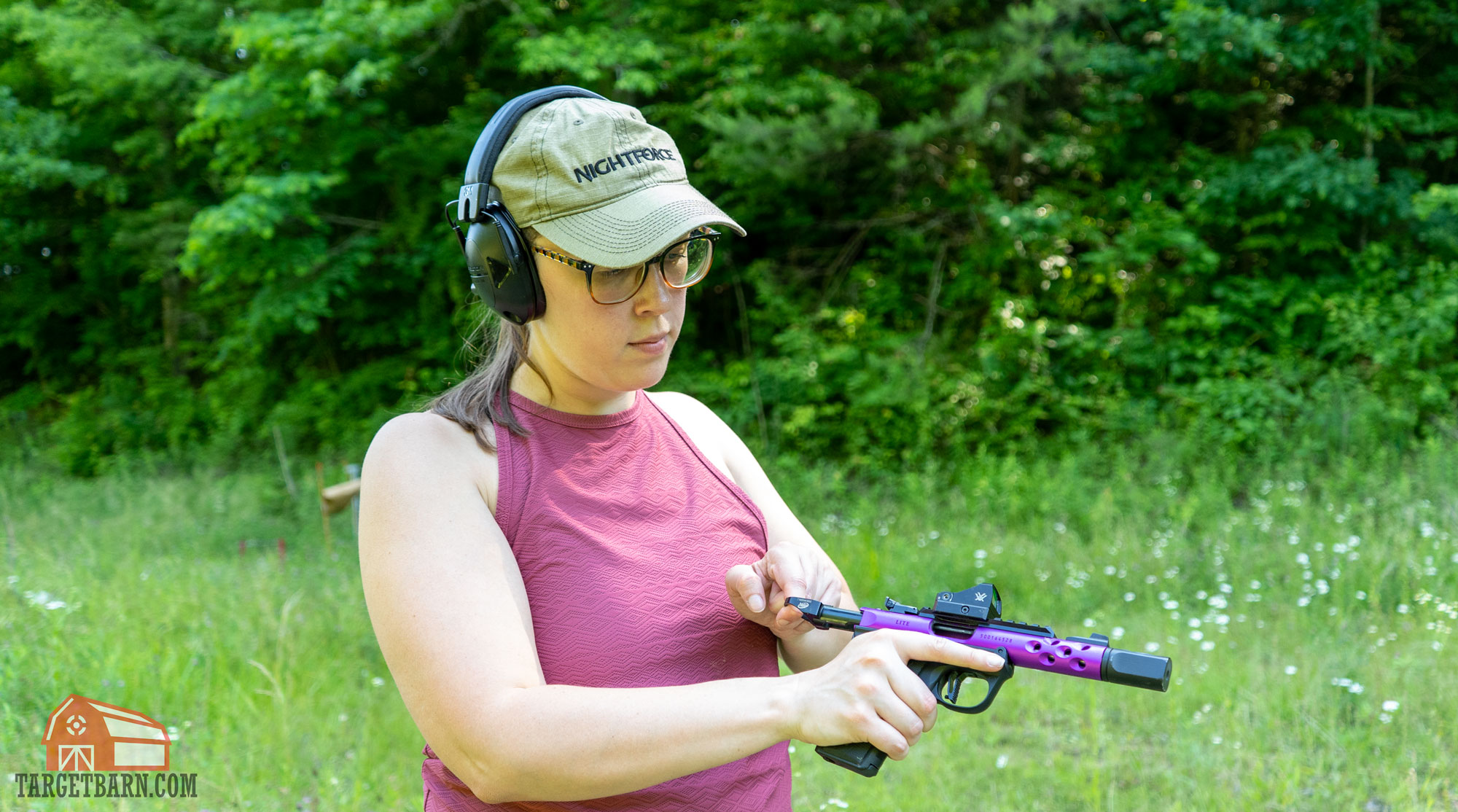 Most of the Ruger Mark IV 22/45 Lite upgrades aren’t necessary. That’s because the gun is a great shooter straight out of the box. However, the upgrades available are what make the gun worth buying, whether it’s just for fun or want to turn it into a race gun. Don’t forget to pick up some .22LR ammo for your Mark IV once it’s time to test out those upgrades at the range!