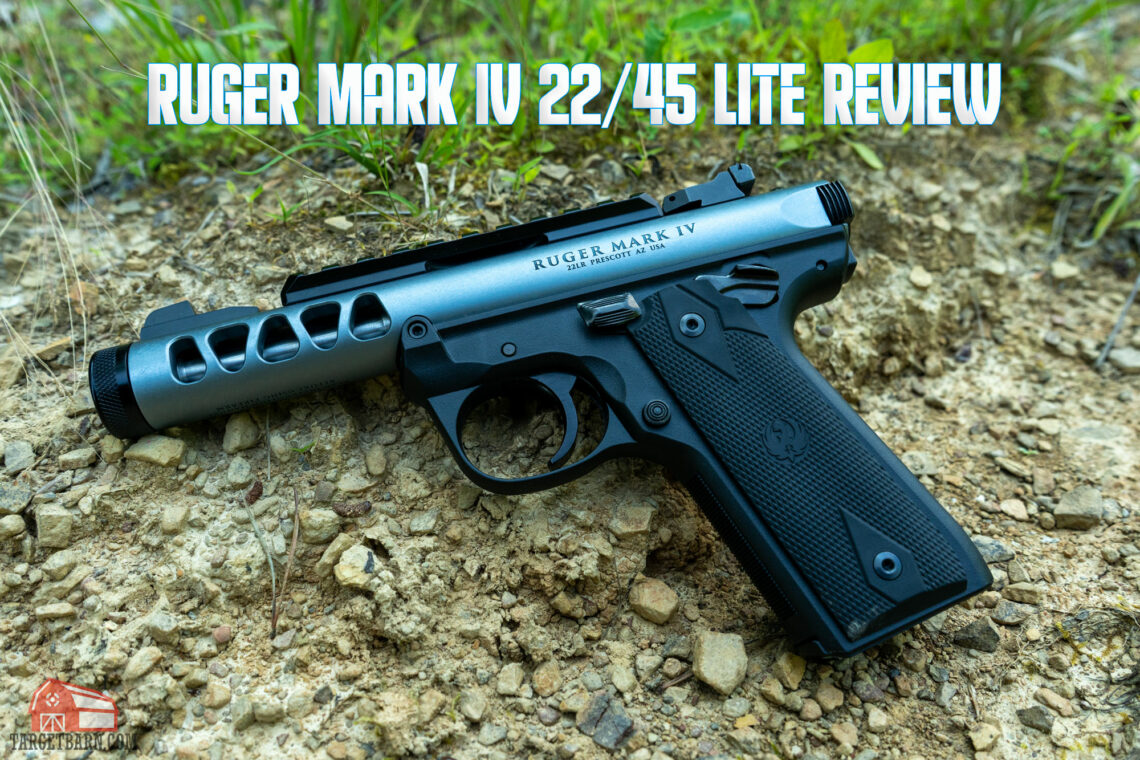 The Ruger Mark IV 22/45 Lite is a small and versatile .22LR pistol built to fill a variety of needs. If you’re looking for a rimfire pistol for Steel Challenge, a .22LR to mount a suppressor on, or just something to plink with at the range, you may be interested in picking one up.

The Mark IV line of Ruger pistols was introduced in 2016 and is the fourth-generation successor of the Ruger Standard. Within the Mark IV lineup, there are eight models available: Standard, Target, Hunter, Competition, Tactical, 22/45, 22/45 Lite, and 22/45 Tactical.

I’ve been shooting the Mark IV 22/45 Lite in Steel Challenge for a few years now. In that time, I’ve gained a solid understanding of the pros and cons of the gun. So, if you’re deciding whether to buy the Ruger Mark IV 22/45 Lite, you’re in the right place.

This article contains affiliate links which means if you make a purchase, we may receive a small commission to help offset the cost of testing and reviews. 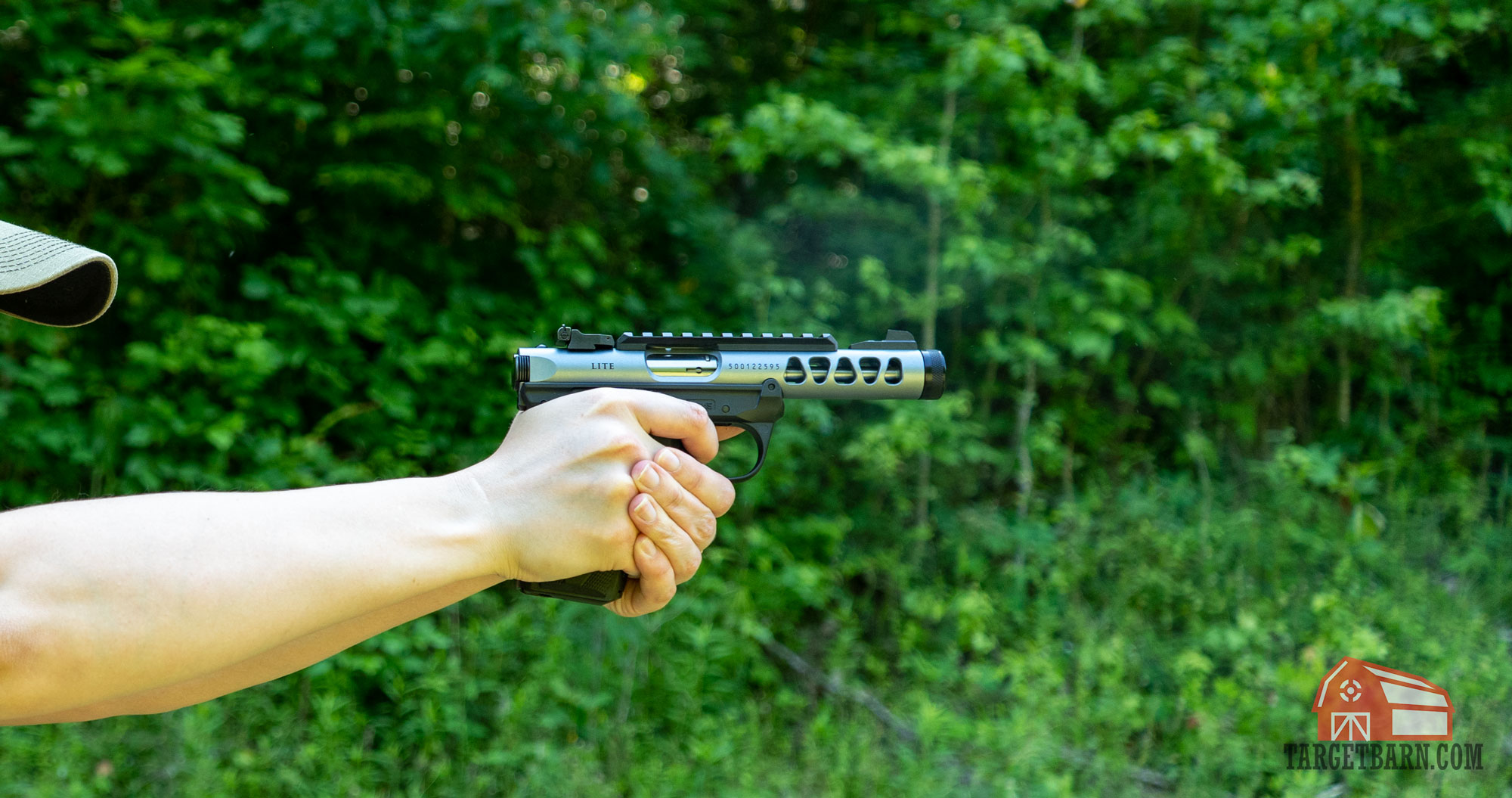 The Ruger Mark IV 22/45 Lite is a semi-automatic pistol chambered in .22LR. It is available in several different color combinations and comes with a picatinny rail, making it easy to mount a pistol red dot sight. It comes with a threaded stainless steel barrel that allows shooters to easily add on a suppressor or compensator. The Mark IV 22/45 Lite’s aluminum receiver features ports that help keep the pistol lightweight at 25 ounces.

Ruger’s best improvement on all of the Mark IV line of pistols is an easy, one-button takedown for field-stripping the pistol. The Mark I, II, and III pistols are notoriously difficult to disassemble for a full clean. During my time working at a gun range, we offered a Mark II rental gun for shooters to try out on the range. Because it was so difficult to take apart, no employee ever wanted to give it a good clean and it was often neglected. Ruger fixed this pain point with the one-button takedown on the Mark IV pistols. By pressing the button on the back of the frame, the barrel-receiver assembly tilts up and off the grip frame.

The checkered, 1911-style grips panels are a rubber material that make gripping the gun comfortable and ensure your hands won’t slip, unlike with some polymer grips. The gun’s serrated frontstrap and checkered backstrap also aid in a solid grasp on the gun. 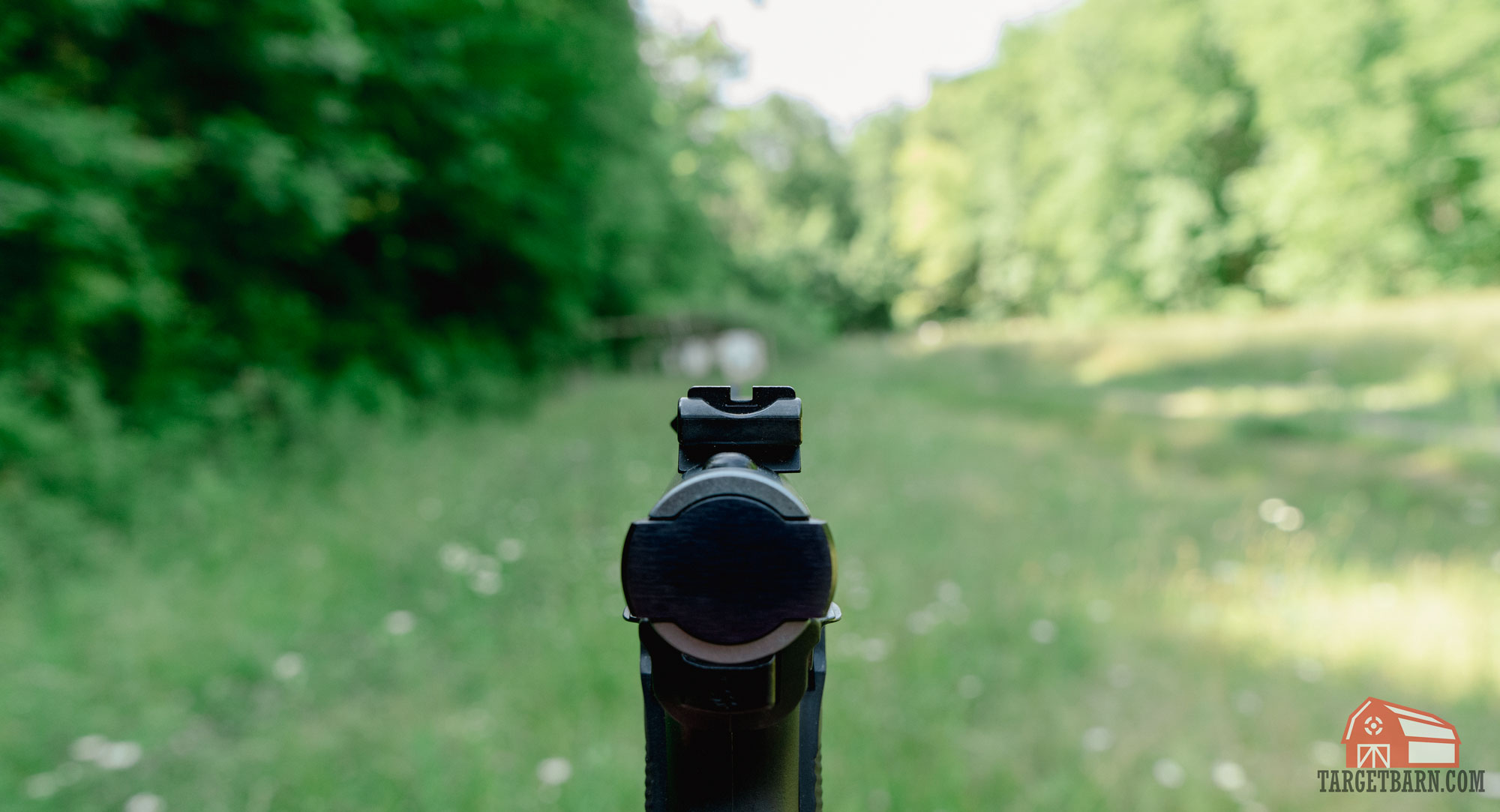 The Mark IV 22/45 Lite features a fixed front sight and an adjustable rear sight. Both sights are black, though you can replace the front sight with an aftermarket fiber optic front sight.

The very first time I shot my Mark IV Lite, I found that my sights were extremely off. Luckily, this is an easy fix with the adjustable rear sights. There are adjustment screws on the top of the rear sight (elevation) and on the side of the rear sight (windage). I recommend spending a little time to sight in the gun when you first shoot it.

The trigger and trigger pull on the Mark IV Lite could be better. The gun’s curved trigger feels wrong to me because of the gun’s 1911-style grip and grip angle — I would expect a flat trigger like that of a 1911. I replaced the trigger on my competition gun with an aftermarket flat trigger face because of this.

The pull on the trigger is a long, heavy, and gritty pull, with many shooters measuring around a 5lb pull. Luckily, there are fixes for this problem, including aftermarket kits or a little kitchen table gunsmithing. 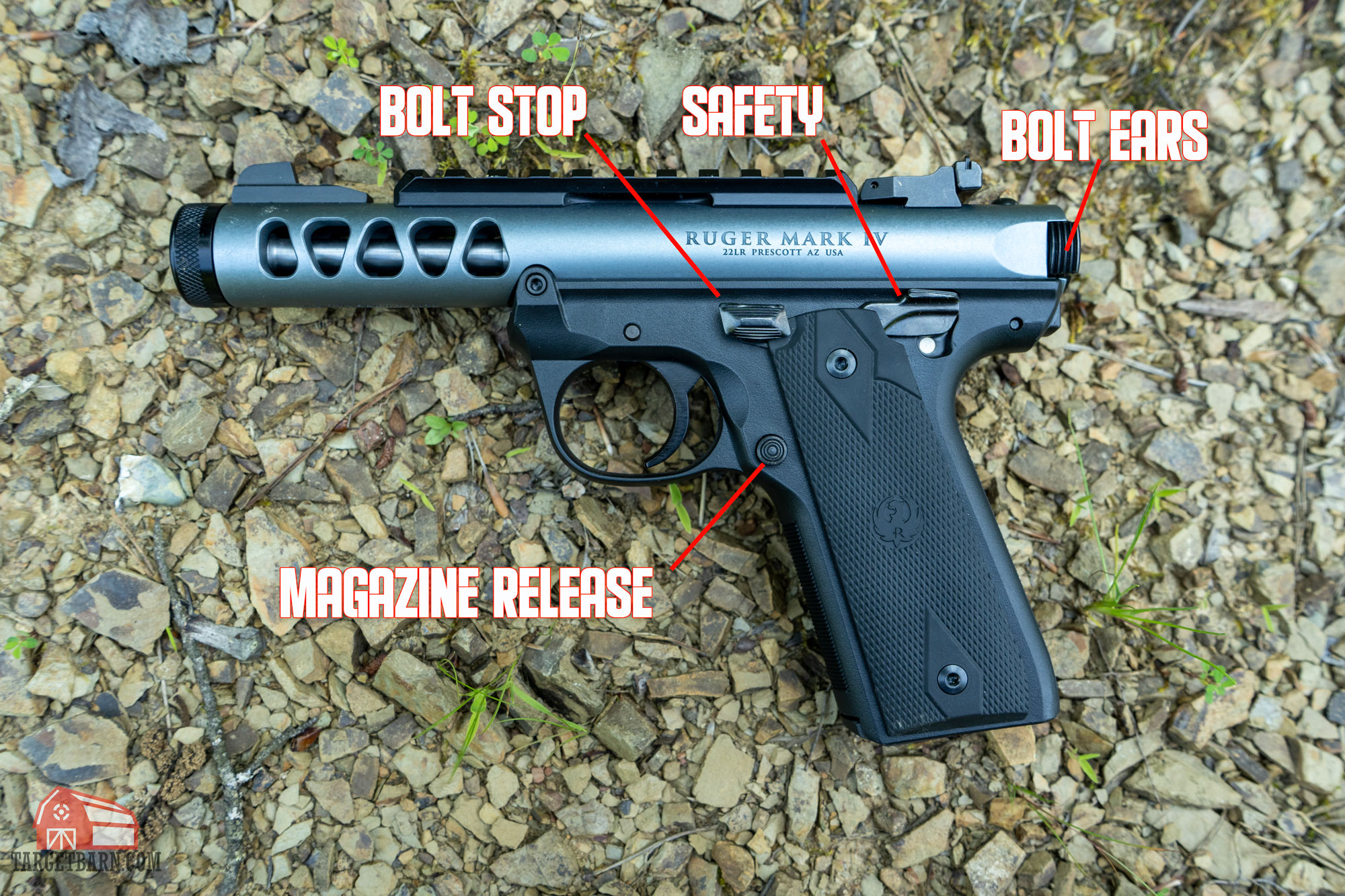 Next let’s look at the controls on the Mark IV 22/45 Lite. We are going to look at the safety, magazine release, bolt stop, and bolt ears.

Lefties are in luck because the Mark IV 22/45 Lite has an ambidextrous, manual thumb safety. Ruger provides a washer that allows the shooter to convert the safety to left-side only if the ambidextrous safety isn’t your thing.

I like to rest the thumb on the safety when shooting, as I would with a 1911. I find that it is not comfortable to do so with the Mark IV 22/45 Lite’s safety because of its smaller size. Luckily, there are aftermarket, oversized safeties that solve this problem and assist in grip and control.

The magazine release on the Mark IV Lite is a circular button behind the trigger guard. If I’m trying to reload quickly, the button is difficult to reach and manipulate. It does function well, practically launching the magazine out of the gun. 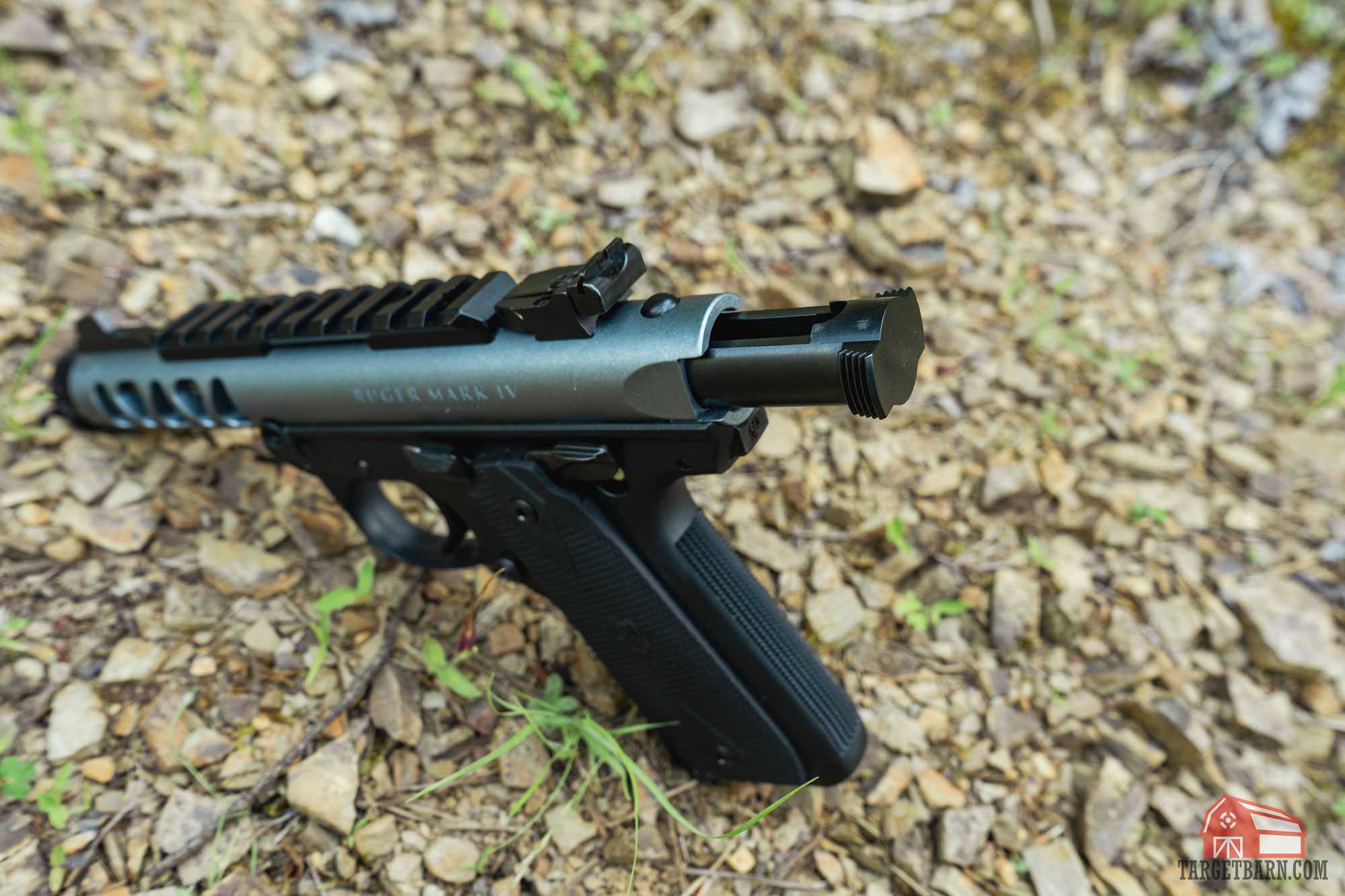 Unlike typical semi-auto pistols, the Mark IV 22/45 Lite does not have a slide that can be racked. Instead, it features bolt ears and a bolt stop. The bolt is accessed on the very back of the gun. You use your pointer finger and thumb to pull the bolt ears back. While the bolt ears are serrated for an easier grip, I find the whole process of racking the bolt awkward. I’ve even been pinched by the bolt ears when my finger slipped off it. During a Steel Challenge match, I had a failure to fire malfunction from dirty ammo and needed to rack the bolt. It was difficult to do so quickly, and my sweaty hands slipped off the bolt the first try.

Luckily, there are a couple tools you can use to avoid this. The first is the MagPal – or something similar – that sits over the magazine and gives you more room to push down on the load assist. 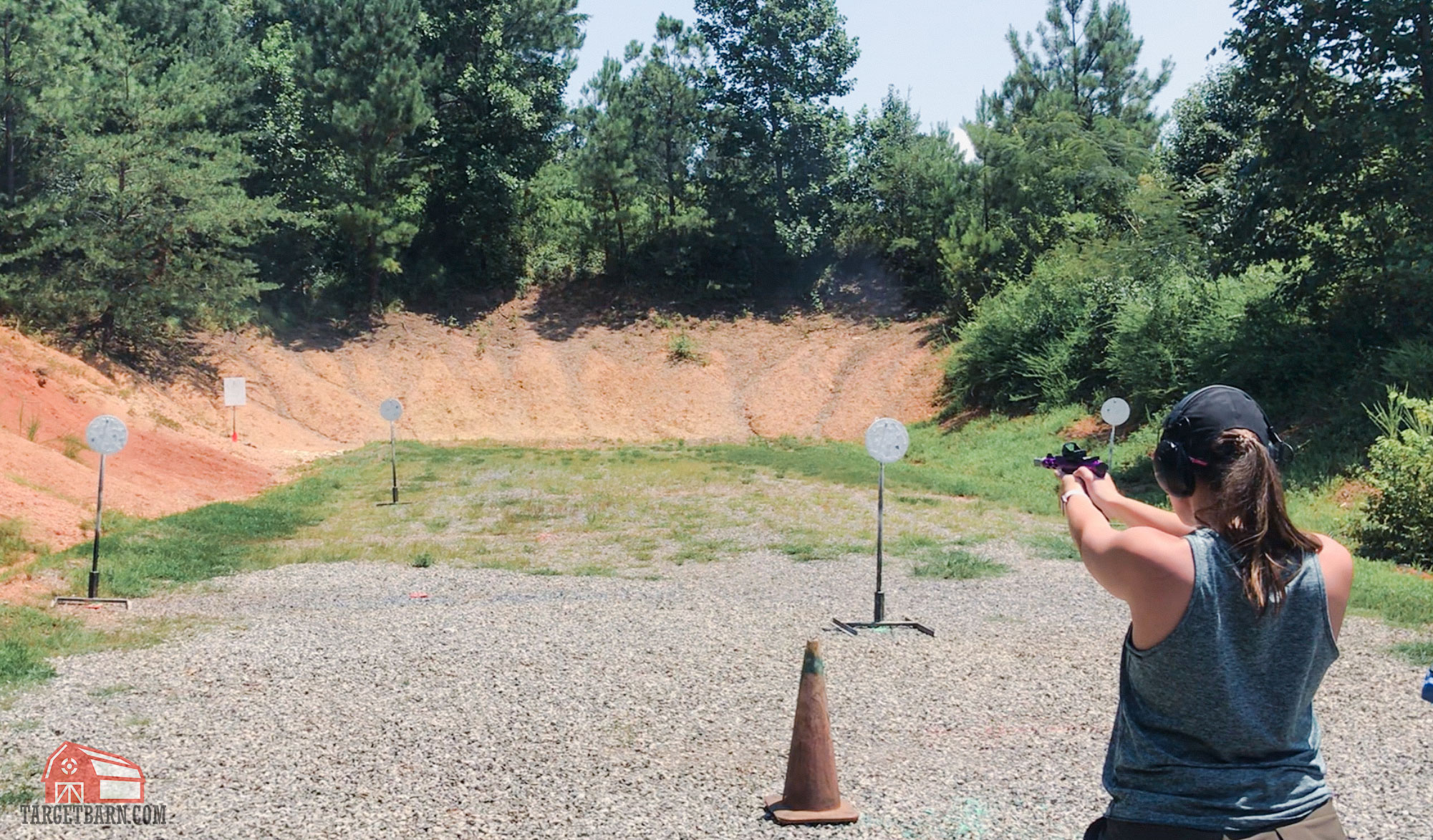 The Mark IV 22/45 Lite has been my Steel Challenge competition gun for the last few years. In that time, I have found that certain .22LR ammo does not run as smoothly as others. Any .22LR rounds that are more gunky out of the box will give the gun cycling issues. I’ve also found that it will make my magazines sticky. Of the ammo I’ve run through it, I had the most trouble with Aguila rounds. On the other hand, it runs Federal Champion .22LR 40gr. ammo exceptionally.

The Mark IV Lite is an accurate shooter. I’ve taken shots at steel a couple hundred yards out with no issue. It has virtually zero recoil, making it enjoyable to shoot. 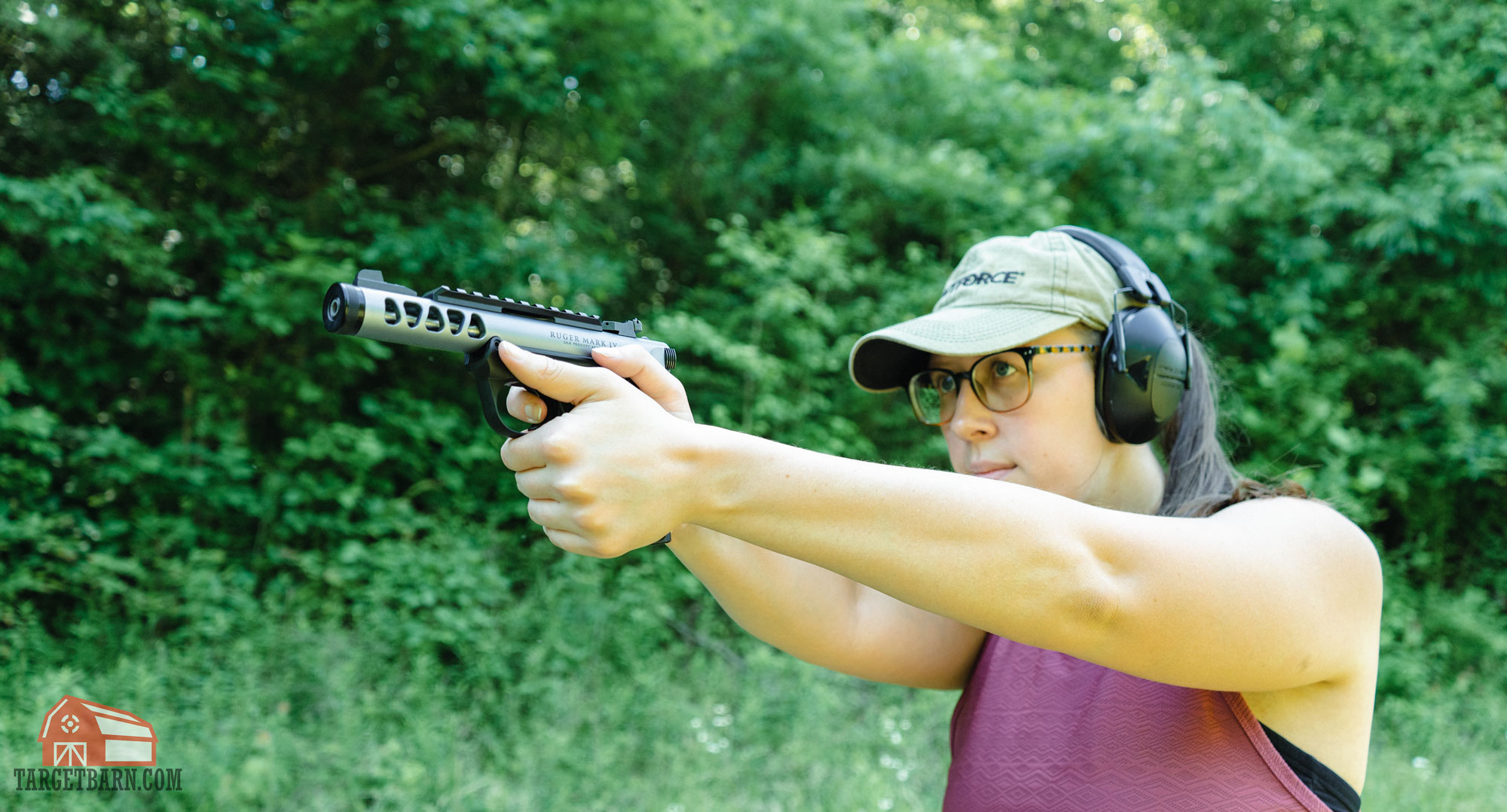