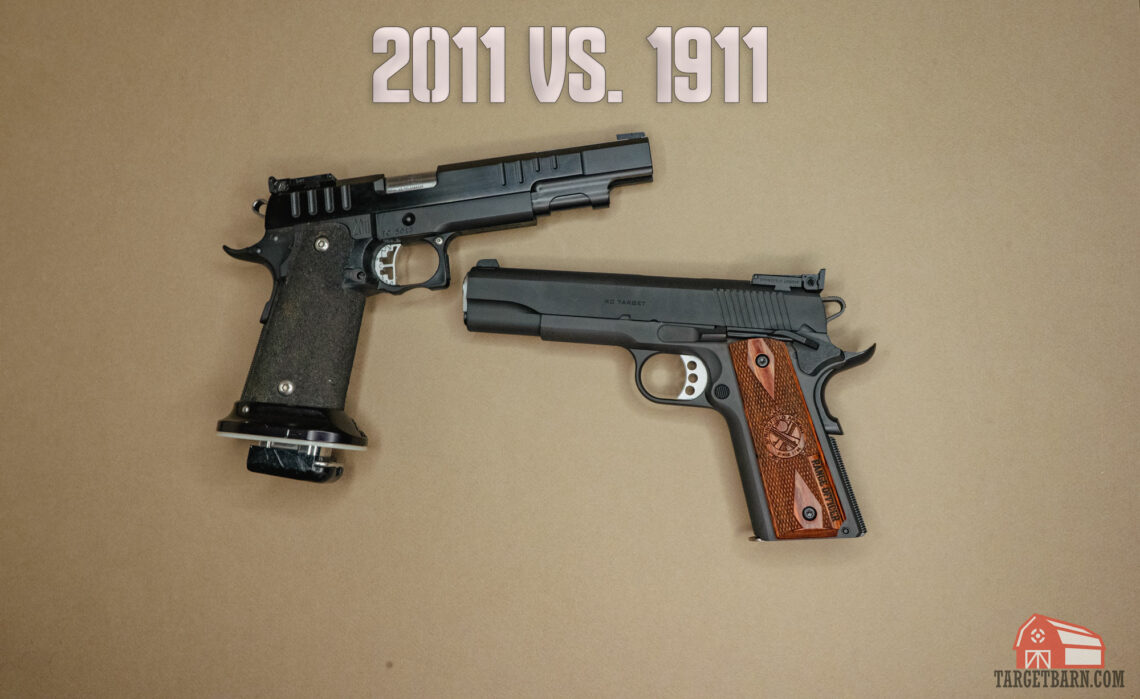 The 1911 is an iconic handgun in American history, so it should be no surprise that variations of the pistol developed over time. The 2011 is a popular pistol among competition shooters, but the differences between the 2011 vs. 1911 are often not well known.

I once held the misconception that a 2011 is just a double stack 1911 chambered in 9mm. Make the mistake of saying that to a 2011-fanatic and you’ll quickly learn the difference between these handguns. Today we’re looking at the 2011 vs. 1911 and what differentiates the two.

Before we discuss the technical differences between the 2011 vs. 1911, let’s look at the history of each.

Entire books have been written on the history of the 1911 pistol, so we’ll keep it brief. Legendary gun designer John Moses Browning designed the M1911, also known as the Colt 1911 or Colt Government, to replace the .38 caliber pistols being used by the military at the time.

The US Army formally adopted the Colt 1911 on March 29, 1911. The US Navy and Marine Corps followed suit in 1913. It served as the U.S.’s standard military sidearm until 1986. Even after it was retired from military use, the 1911 has remained one of the most popular and iconic firearms among American gun owners. The 1911 is enjoyed by casual shooters and competition shooters alike, and many people choose to carry it for self defense.

In 1982, Virgil Tripp started building custom 1911 pistols for competition shooters. In 1993, an engineer named Sandy Strayer joined Tripp’s business, Tripp Research, and together they designed and built a modular, hi-capacity 1911 frame. The final patent for this new competition pistol, now known as the 2011, was finalized in May of 1994.

Strayer left STI in June of 1994 to team up with professional shooter and gunsmith Michael Voigt. They formed Strayer-Voigt, Inc., also known as SVI, marketing their products under the brand name Infinity Firearms. At that point, STI changed the ‘STI’ acronym from ‘Strayer-Tripp International’ to ‘Science, Technology, Ingenuity.’

The 1911 has a storied history but the newer 2011 offers shooters more modularity and is typically a double stack, whereas the classic 1911 is a single stack. Both platforms are available in several calibers, but 2011 owners have the ability to change the entire grip frame, while only the grip panels can be changed on the 1911.

The standard Colt Government M1911 is a semi-auto, single action only, single stack handgun chambered in .45ACP. It has a 5-inch barrel and has a standard capacity of 7 rounds in the magazine and one in the chamber.

Though the standard 1911 has a 5-inch barrel, gun builders have designed different styles of 1911’s by altering grip size and frame size, often making them smaller and easier to conceal. There are 1911’s chambered in different calibers other than .45ACP as well. You’ll find them chambered in 9mm, .22LR, .40S&W, .38 Super, and more. Some companies, like Rock Island Armory, make double stack 9mm 1911’s.

So, if there are double stack 1911’s chambered in 9mm, what is a 2011? Well, Virgil Tripp and Sandy Strayer modeled the 2011 pistol after the 1911, but with more modularity. Like the 1911, 2011 pistols are single action only and they have many interchangeable parts. 2011’s are typically double stack, though, single stack versions can be made. They can be chambered in many calibers, but you’ll typically find them chambered in 9mm (9mm major specifically), .40S&W, and .38 Super.

They’re especially popular among competition shooters who use them in USPSA, IPSC, and IDPA matches. Most often when people refer to race guns, they’re describing a souped-up 2011 with many modifications.

The biggest difference is the modularity of the grip frame. The 1911 is one solid piece and only the grip panels can be replaced. The 2011’s grip frame, which includes the grip, magazine well, and trigger guard, can be removed and is actually two separate pieces that come together. With a 2011 pistol, you can usually see a screw on or near the trigger guard that holds the two grip panels together.

Some of the internals are different in the 2011 vs. 1911 as well. The magazine catch, mainspring housing, and trigger are not the same as those in 1911’s because the double-stack magazine has to pass through the trigger bow.

So, which is the better gun? Well, that’s totally up to personal preference. There’s nothing quite like a classic 1911 as John Moses Browning intended. However, the 2011 has carved its place as a competition gun and is becoming increasingly popular as a duty gun and everyday carry gun.