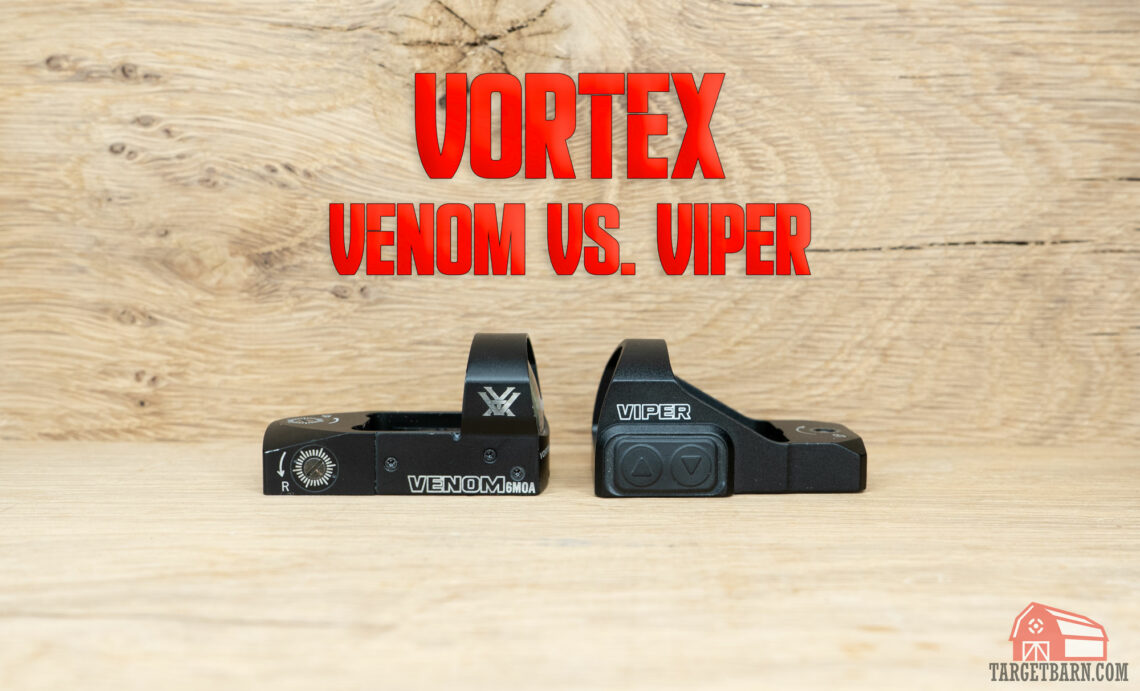 Shooters shopping for an affordable and reliable red dot optic often find themselves comparing the Vortex Venom vs Viper red dots. These two optics have many similarities and a few subtle differences. I’ve owned and shot both, using them on my USPSA and Steel Challenge competition guns.

In this article, we’ll look at the differences between the Vortex Venom and Viper red dots to help you make the right selection for your gun.

When shopping for the best pistol red dot sights, you’ll want to look at the specifications of each optic to see if it fits your needs. First we’ll break down the basic differences of the Vortex Venom vs Viper in a comparison chart. Disclaimer: This table contains affiliate links, meaning we receive commissions on purchases to help us pay for testing on the gear mentioned here on our blog.

Overview of the Vortex Venom 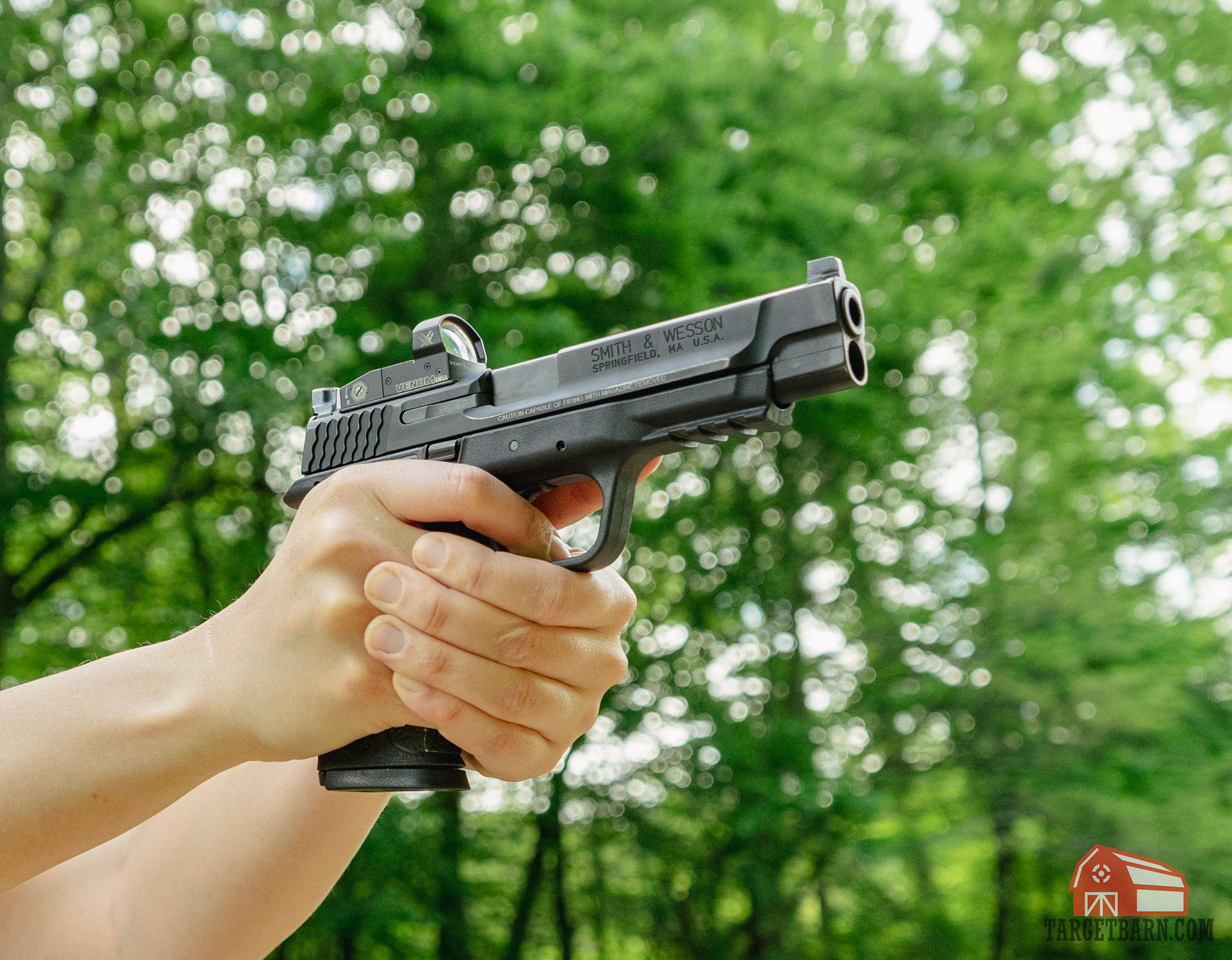 The Vortex Venom comes in both 3 MOA and 6 MOA. If you’re looking to mount a red dot on a carbine, the 3 MOA Venom is the way to go. The smaller 3 MOA dot makes it easier to shoot targets at a longer distance. That’s because the the dot does not obscure as much of the target.

I have the Venom mounted on my 9mm Smith & Wesson M&P that I use in the Carry Optics division of USPSA. It has been a reliable optic, performing well at local and state level matches.

A big difference between the Venom and Viper is that the Venom’s battery tray is located on the top of the optic’s body. I like that I can switch out the battery without having to remove the entire optic from the gun.

Overview of the Vortex Viper 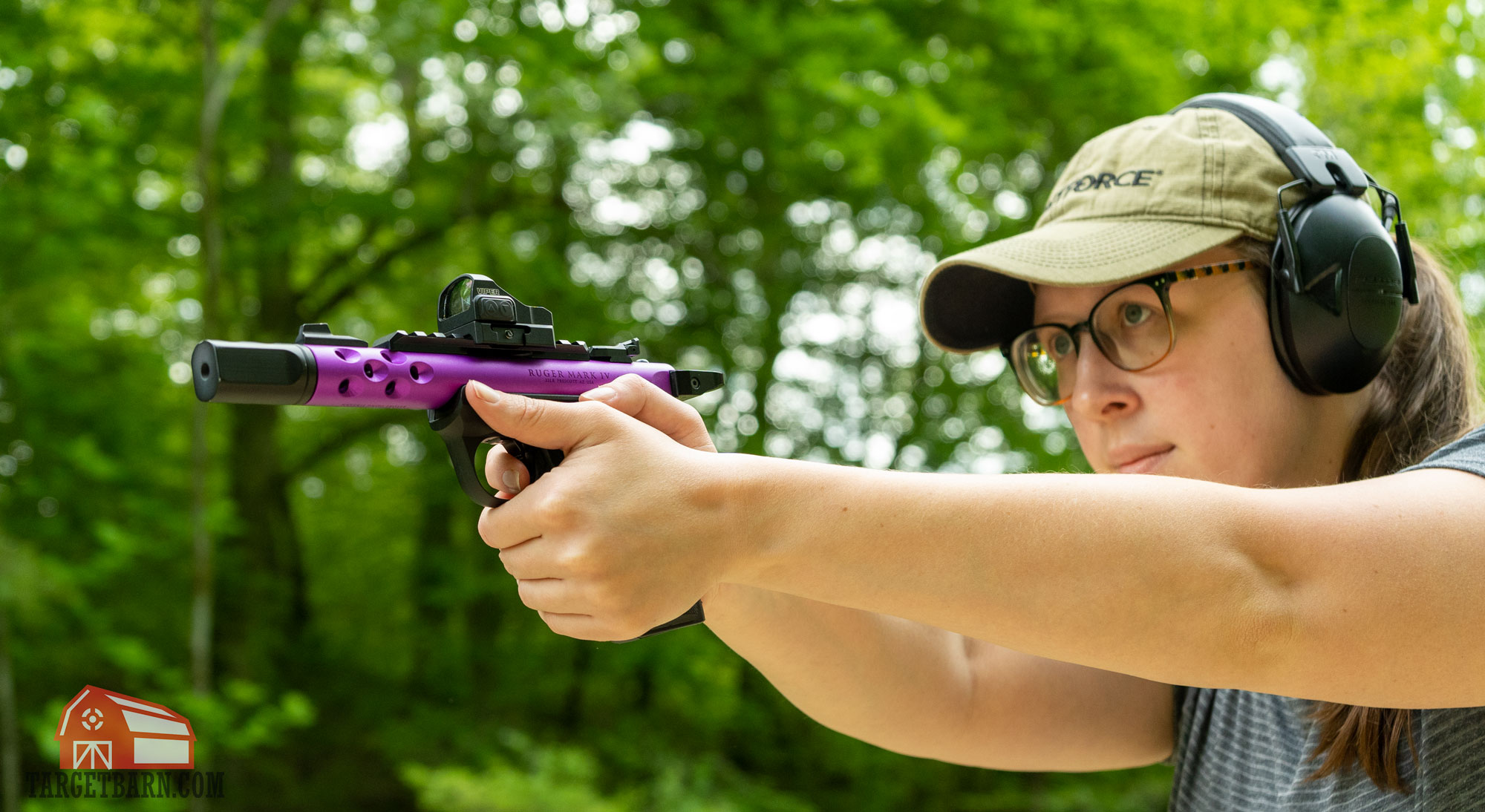 The Vortex Viper has a bright red 6 MOA dot and a low mounting height, making it a great option for pistols with cutout slides.  It is the very first red dot I owned, mounting it on my M&P mentioned above. I initially bought it because it was more affordable than the Venom at the time. I also knew of Vortex’s lifetime warranty in case I had any issues.

The Viper ran well for a few months of matches. I was preparing to shoot my state’s USPSA sectional match when I started having issues. Two weeks before the state match, I was shooting a high round count local match when my dot started to flicker in and out. I would start out the stage with my dot working, but each shot would turn the dot on and off. Luckily, my suppressor height sights co-witnessed, and I was able to finish the match. I replaced the battery, but the issue still persisted. Once I reached out to Vortex, they quickly shipped out a Venom at my request in exchange for my malfunctioning Viper. I received it in plenty of time to prepare for the upcoming state match.

While I had this issue with that particular Viper, I still ordered a Viper for the rimfire pistol I use in Steel Challenge. It has held up through thousands of 22LR rounds at matches and I like how sleek the body is and the size and shape of the window. The biggest downfall of the Viper is the location of the battery, which we’ll discuss in more depth later.

The Vortex Venom and Viper have many things in common:

The primary differences between the Vortex Venom vs Viper are:

Both optics have 10 brightness levels, but only the Venom has an auto-brightness feature that adjusts to the light conditions. Neither the Venom nor the Viper have a shake awake feature, but the Venom will automatically turn off after 14 hours of being on.

They are very close in weight with the Venom being 1.1 oz. and the Viper being 1.03 oz.

Basically, the glass window on the Venom is slightly wider and slightly shorter than the Viper’s. 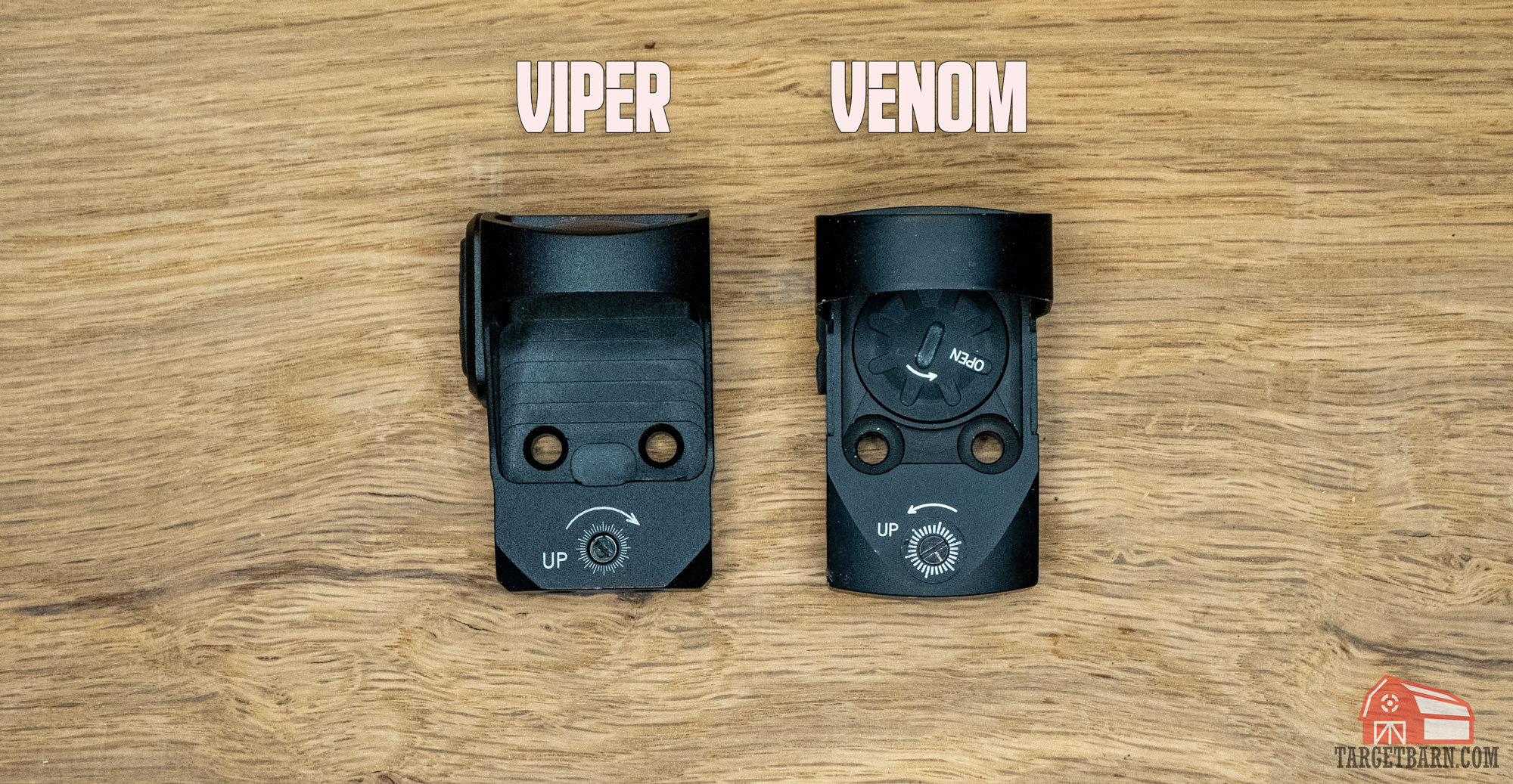 The location of the battery is one of the biggest differences between the Viper and Vortex. The Venom’s battery tray can be accessed from the top of the optic. You simply twist open the battery cover to change it.

They also have different battery sizes. The Venom takes a CR 1632 battery while the Viper takes a CR 2032 battery.

Both the Venom and the Viper are available in a 6 MOA dot size. The Venom also comes in a smaller 3 MOA dot size. As we discussed before, this is better for carbines and rifles, or for shooting at longer distances. That’s because the smaller dot size obscures less of the target.

The last difference to note is the difference in windage and elevation adjustments.

Both optics have an adjustment graduation of 1 MOA.

Vortex Venom vs Viper: Which Is Better? 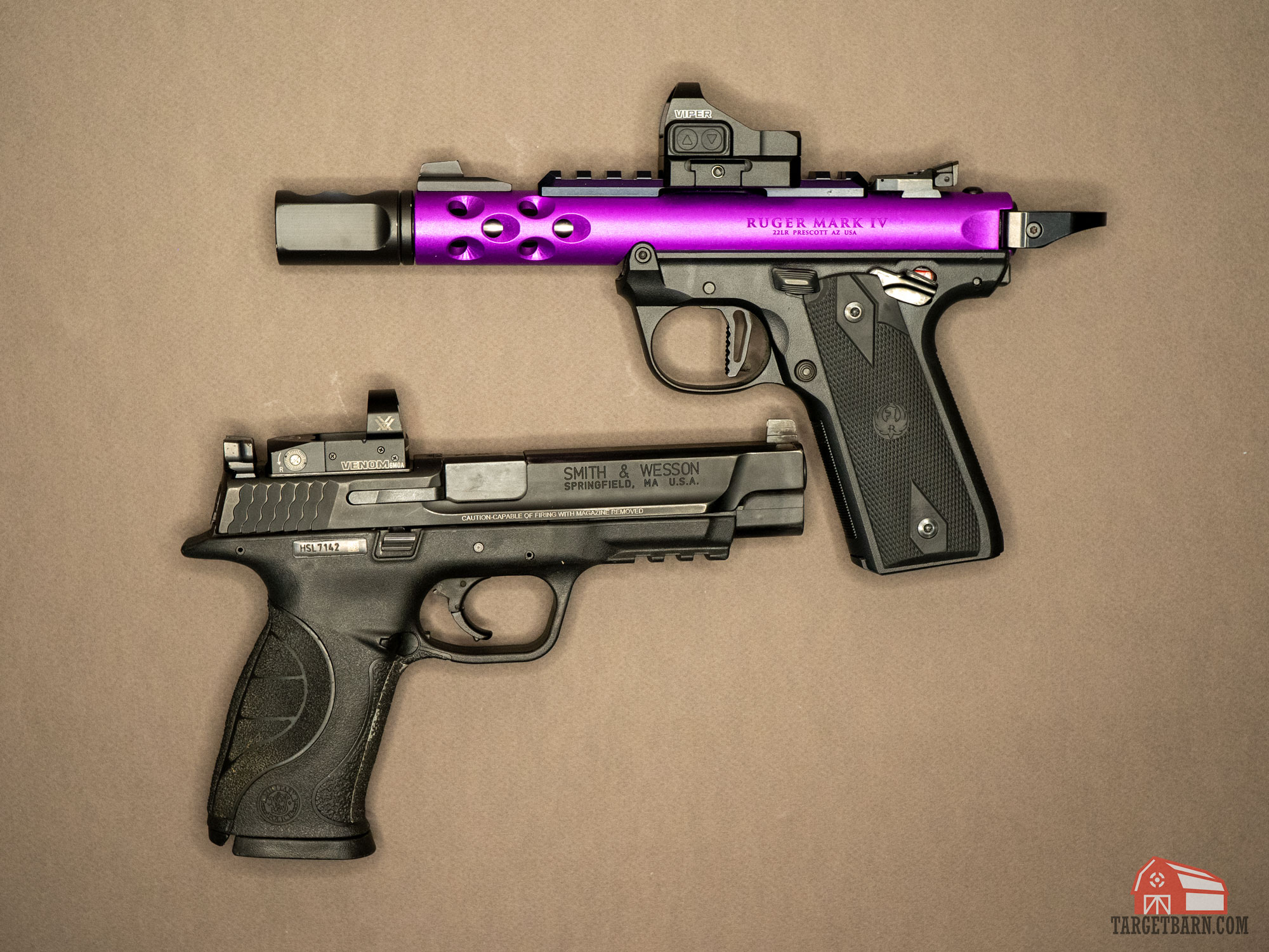 In the Vortex Venom vs Viper debate, the better option is totally going to depend on your preferences. I prefer the Venom because of the ease of battery replacement, though I like the window of the Viper more. If you plan to mount your red dot onto a carbine, you’d probably be better off with the 3 MOA Venom. Whichever you choose, you can feel confident that the Vortex Optics customer service will take care of you if any issues arise.