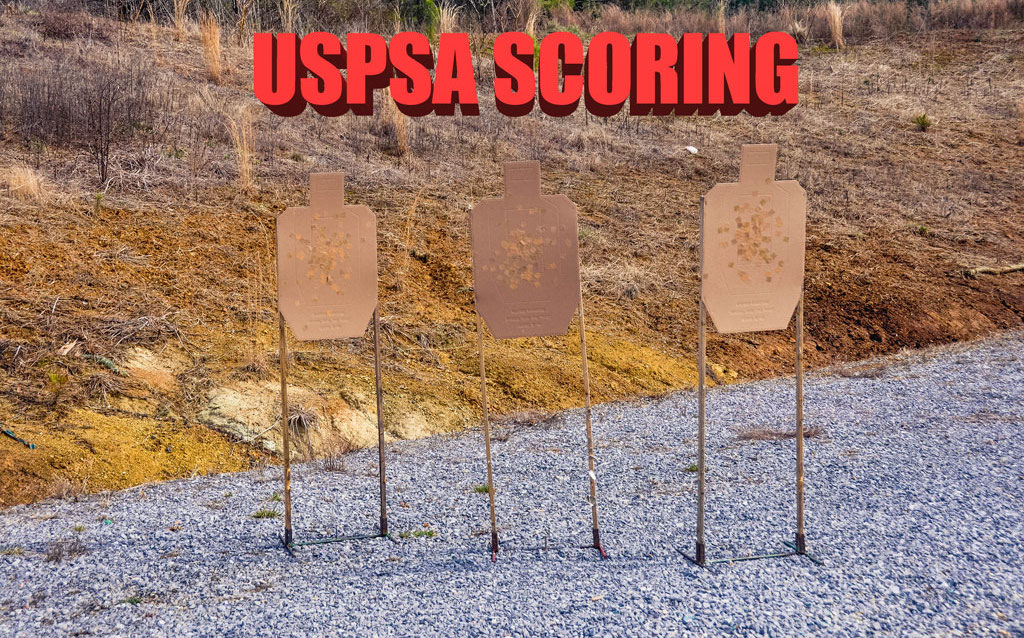 USPSA Scoring – How it Works & How to Calculate

The United States Practical Shooting Association is the most popular modern action shooting sport based on participation numbers in the United States. By maintaining a good competitive balance, interesting stages, and a strong national organization, it continues to attract new shooters year after year. However, one of the barriers to entry and frustrations for new shooters is trying to understand how USPSA’s scoring system works.

When I first started shooting USPSA, I had no idea how the scoring worked. All I knew was that I should shoot the targets in the middle faster than the other guys! To be fair, if that’s all you care about, then you don’t need to read the rest of this article, and you should go dry fire instead!

A deeper understanding of how the scoring system works allows you, the shooter, to better plan for stages and create effective match strategies. A truly nuanced understanding of USPSA scoring is a multi-faceted concept, so if you’re ready for some nerd stuff, buckle up! 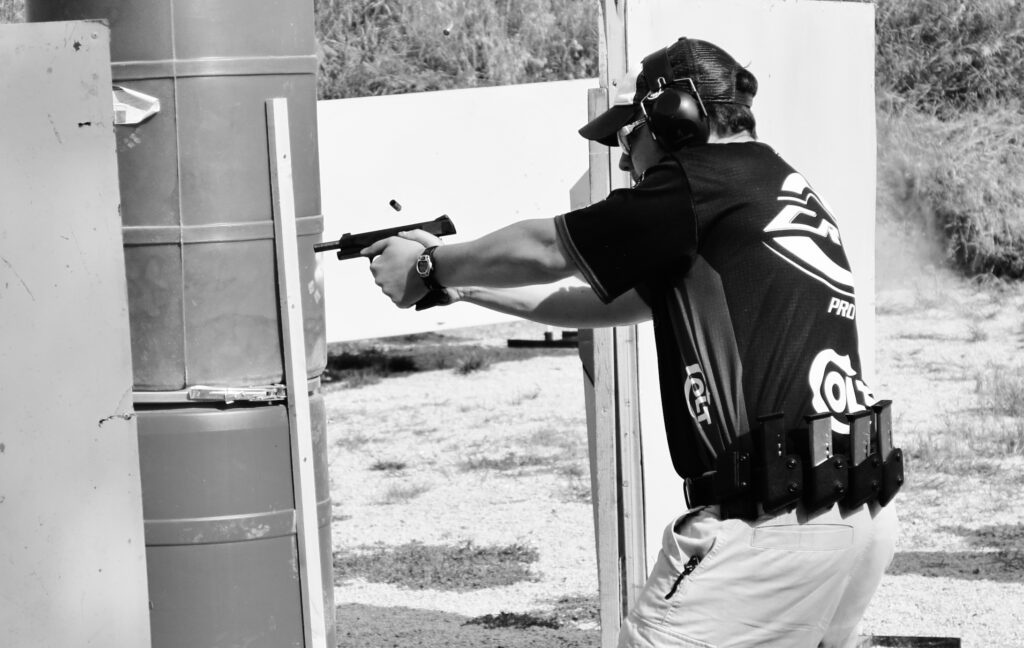 The first thing we have to understand is the difference between Major and Minor Power Factor scoring. Power Factor, or PF is an artificially generated number, created by taking your bullet’s muzzle velocity and multiplying it by the grain weight of the bullet. To make the result more manageable, it’s then abbreviated to a simple three digit number by dividing the result by 1,000.

Here’s what that looks like: a 147 grain 9mm projectile going 875 feet per second would have a power factor of 129. That’s because 147*875=128,625. Take 128,625 and round up to 129,000 then drop the 000 to give your result. On its surface it appears clunky, but it creates a consistent, repeatable measurement to classify a cartridge’s “power.” This is because back in the early days of USPSA, when it had a different name, the founding fathers still believed in the myth of stopping power, and wanted harder hitting rounds to have a scoring advantage. In modern USPSA, rounds with a power factor greater than 165 score Major, and rounds less than 165 PF score Minor.

All rounds must score at least a 125 PF to be legal for competition. Major vs Minor scoring is important because it is applied to how the different divisions are scored.

What’s a division? In USPSA, handguns are divided into 7 divisions, with one extra division for pistol caliber carbines.

The USPSA divisions are:

2. Limited – like Open division, but does not allow red dots or compensators

3. Limited-10 – the same as Limited but with a 10 round magazine capacity for ban states

5. Carry Optics – Similar to production but allows 20 round magazines and slide mounted optics

6. Revolver – I shouldn’t have to explain this

Of the handgun divisions, Production and Carry Optics do not use a combination of Major/Minor scoring. In those two divisions, all handguns score Minor regardless of PF.

Ok, so what is Major/Minor scoring? To create an example, let’s say you and your buddy are both shooting Single Stack. He’s using a .45 making Major PF, and you’re using a 9mm making Minor PF. 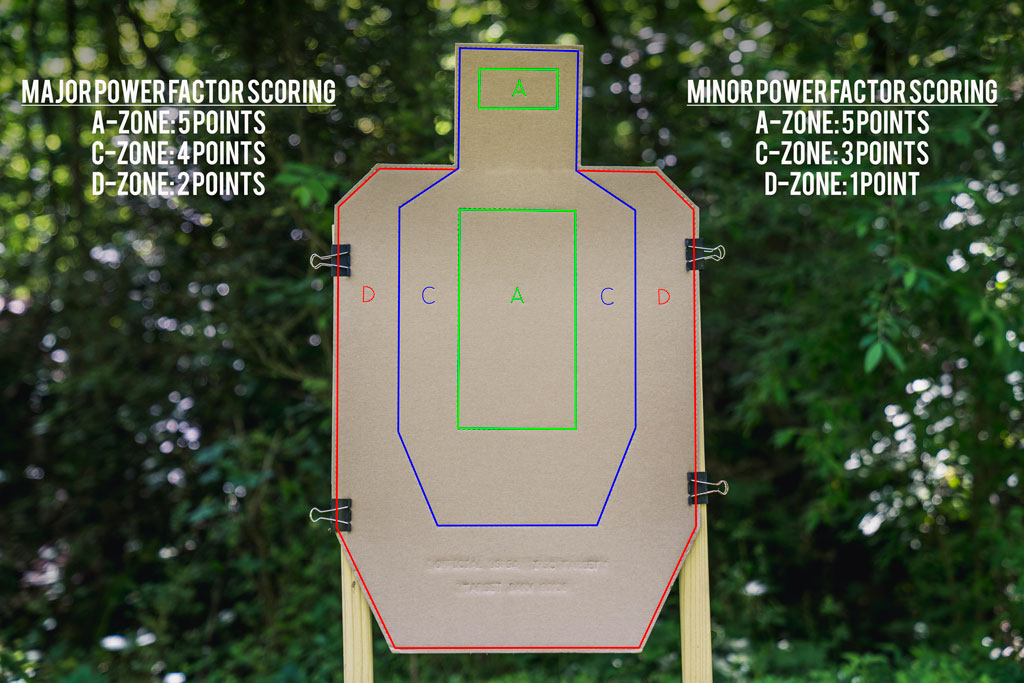 You will occasionally see a USPSA Classic target during a match. It has an A-Zone, C-Zone, and D-Zone and is scored the same as the USPSA target. Steel poppers and metal plates are also commonplace in matches. They are worth 5 points each for both Major and Minor.

It seems like on the surface Major would be better, right? Generally speaking, that is the case. Open and Limited, both of which allow Major or Minor are dominated by guns making Major PF. Production and Carry Optics don’t allow Major, so we can worry about those later. Revolver is dominated by 8-shot moonclip loading revolvers scoring Minor, and Single Stack is split between guns shooting Major with 8 round magazines, and guns shooting Minor with 10 round magazines.

The reason why points are so important is in how USPSA calculates winning. 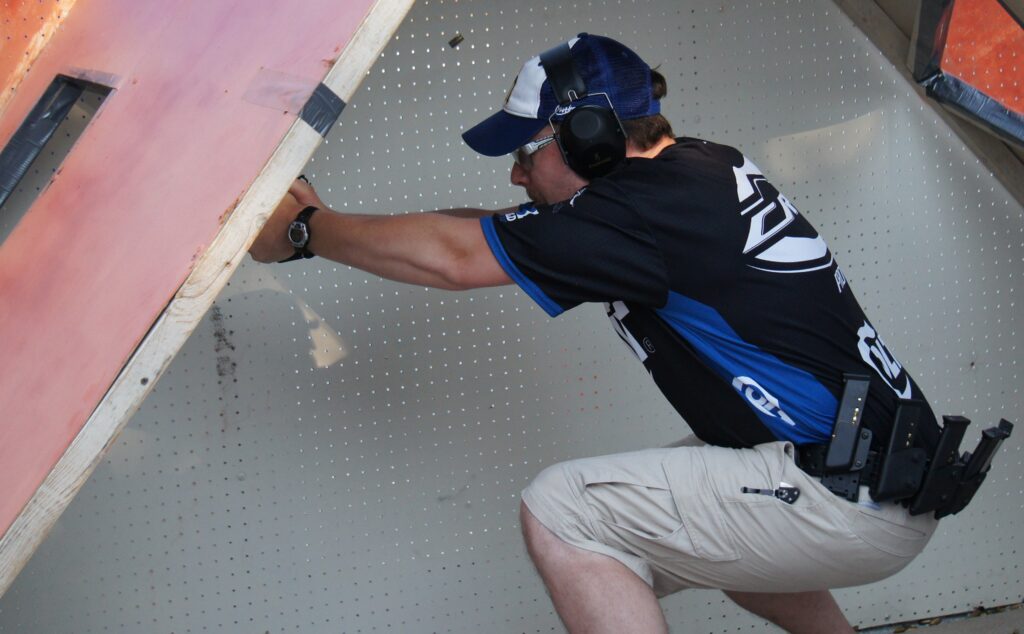 USPSA uses what is called “hit factor” scoring. For whatever reason, they use the term “hit factor” to mean something simple: points per second.

For example: a USPSA stage has 10 paper targets that all need to be shot two times. That means that the points available on the stage, if you shoot all A-zone hits are 100. Each paper target is worth a potential 10 points because you need to shoot it twice, and A-zones are worth 5 each. 5×2=10, and 10 targets times 10 points each equals a potential 100 points. Because you’re a ninja, you shoot all A-zone hits for 100 points, and you do this in 19 seconds. Your hit factor, or points per second is 100/19, which equals 5.263. After everyone shoots the stage, the shooter with the highest hit factor wins the stage.

There are a few things that can hurt your stage score as well. USPSA assigns penalties for various actions, which take away from your score. For example, missing a target completely with one shot is -10 points. Hitting a no-shoot target is also -10 points, and failing to follow the stage procedure, for example by shooting outside of a designated shooting position is also -10 points.

Let’s go to another hypothetical example now. You and your friend are both shooting Production. On a stage with 150 available points, he shoots 30 A-zone hits, getting all 150 points. He does this in 45 seconds, for a hit factor of 3.3333. You like to burn things down and shoot a lot less A zone hits than he does and score 120 points on the stage. But you do it in 30 seconds, giving you a hit factor of 4.0000. You’ve beaten your friend on the stage, and are legally allowed to make fun of him for sucking at life. 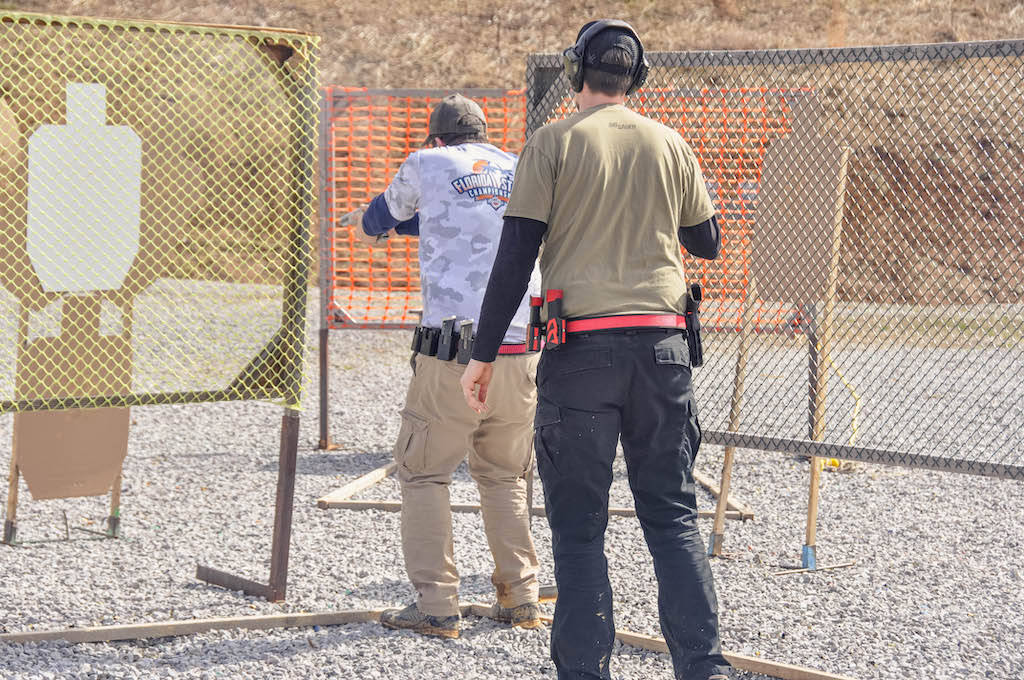 This is where we get to the complicated part. Now that you understand Major vs Minor, scoring zones, and hit factors, we have to get into how USPSA actually decides who wins and loses. Earlier, we used the example of a hypothetical stage with 15 targets. We’ll stick with that. That stage, as we mentioned above, is worth 150 possible points. You’re shooting Production division at this pretend match, and on this stage you shot a 4.000 HF. The best shooter on that stage shot a 4.653 HF. The shooter with the highest Hit Factor wins the stage, and gets all the points. Everyone else gets points awarded on what percentage they shot of the High Hit Factor for the stage. That means that in our hypothetical example, the HHF is 4.653, that dude gets 150 points. You shot a 4.000, which is 85.97% of the HHF, so you get 85.97% of the 150 points: 128.95. At the end of the match, everyone’s points get added up and the match winner is the person with the most points. Clear as mud, right?

While all this may seem daunting at first, the most important thing to remember is that until you’re good enough to try to win matches, the best strategy is to go out there and shoot as many A-zone hits as you can, as fast as you can. In fact, if you keep doing that, you’ll probably end up doing well. And try to have fun while you’re at it!