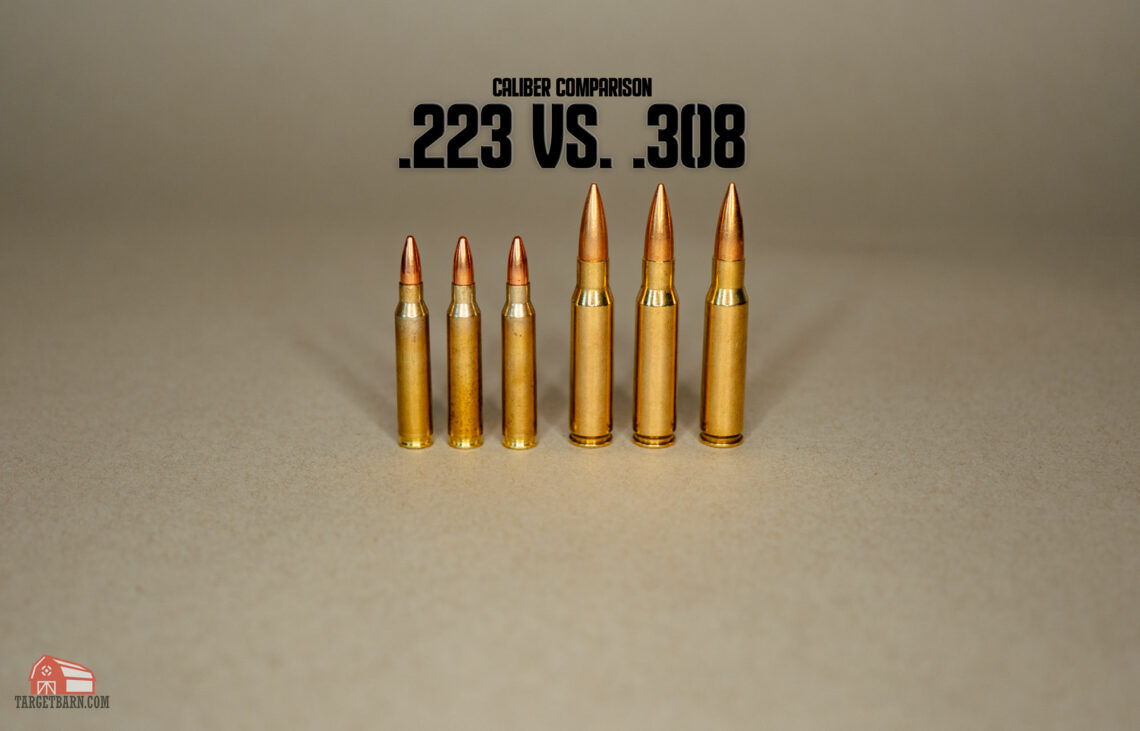 As I write this, I’m trying to imagine what would possess someone to type .223 vs .308 into Google. The rounds are good at completely different things that attempting to draw a comparison from one to the other is nearly impossible. What question are you asking? .223 vs .308 for home defense? For long range shooting? Or for shooting lizard men?

Since any one of those could be an article on its own, and thanks to the recent uptick in purchases of rifles for self/home defense, we’ll look at the question that probably doesn’t need to be answered, but someone asked: which is better for home defense, .223 or .308? But first, we’ll dive into the technical differences between the two rifle rounds.

When it comes to the specifications of the two rounds, the biggest difference is their size. The .308 Win houses a larger bullet and case capacity as well as a longer overall length.

Because of their size differences, there are performance differences between the two rounds. Let’s take a look at how the .223 Rem and .308 Win differ in terms of velocity, energy, and bullet trajectory. 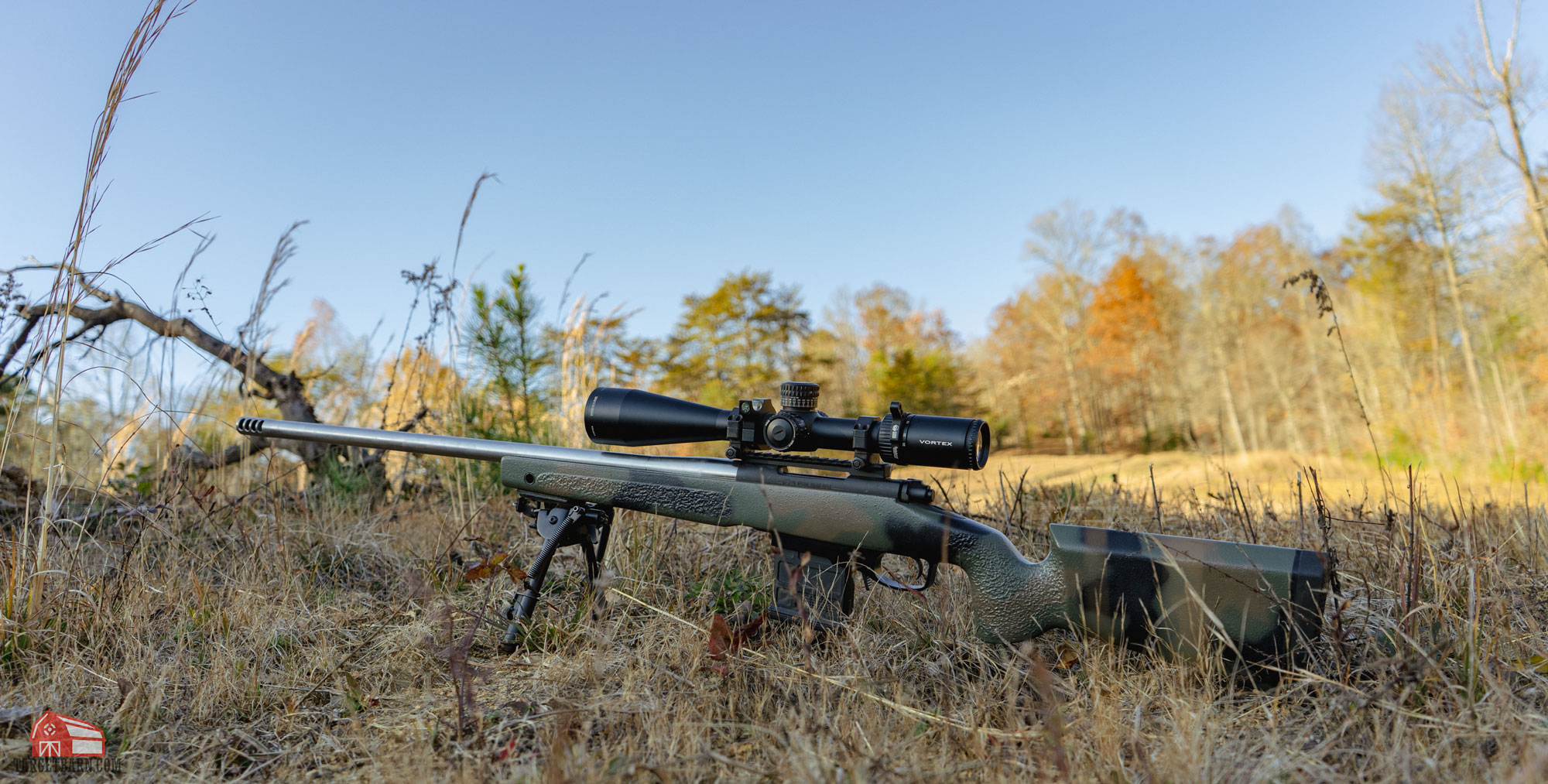 Bullet trajectory is the path a bullet takes from the muzzle of the barrel to the target. We measure this based on bullet drop in inches. The .223 Rem has the advantage here, with a flatter trajectory out to 500 yards, but begins to lose velocity at greater distances. The .308 Win ammunition has the advantage at distances greater than 500 yards, generally having a flatter trajectory at those longer distances. This makes it the better option for long range shooting. 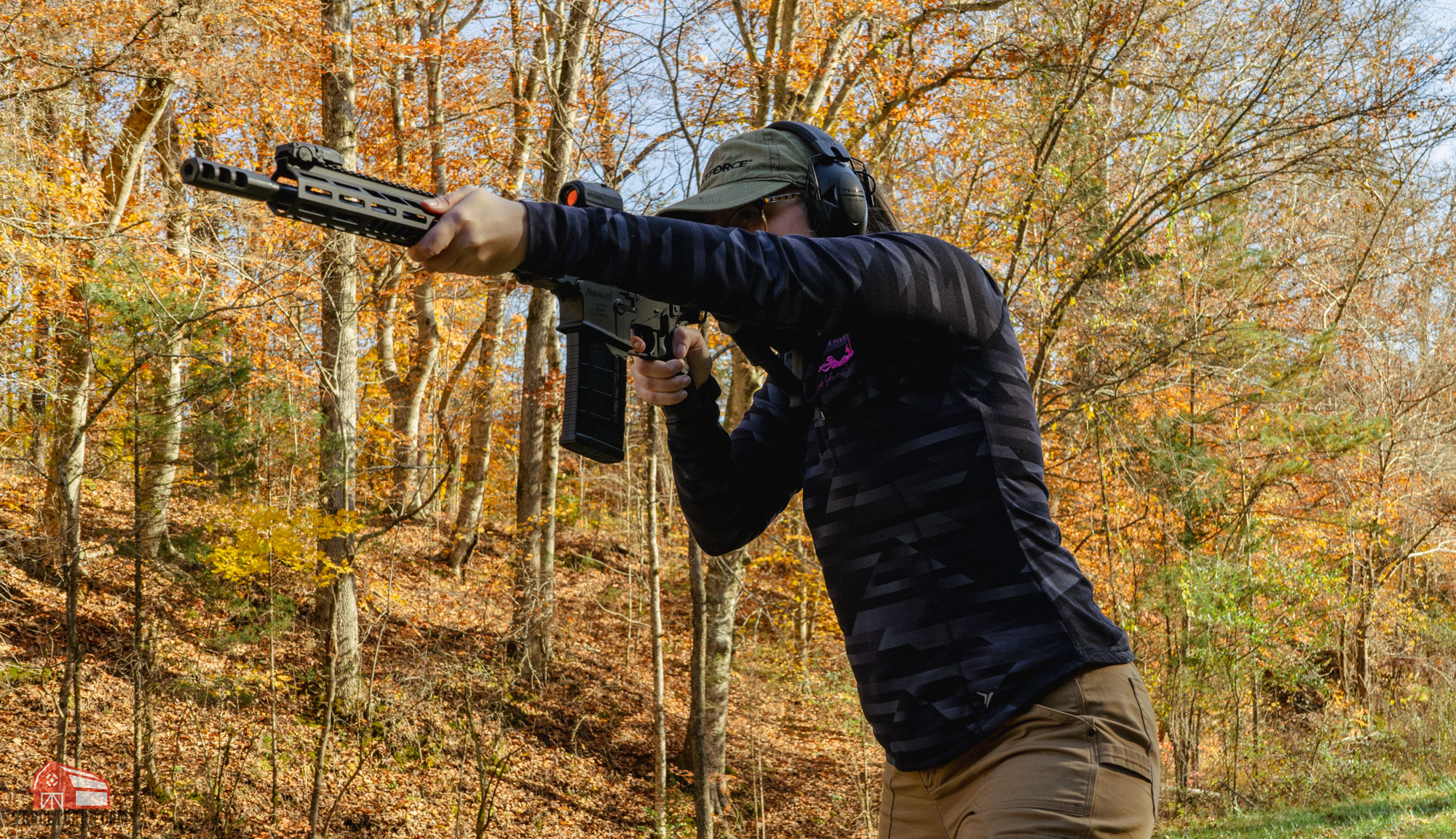 Now let’s examine the all the reasons .223 is better than .308 for home defense.

First, in an urban environment, like an apartment or condo, it’s possible to get very compact .223 rifles that accept any number of common aftermarket suppressors to keep you from blowing your eardrums out. Compact .223 rifles and pistols are far more comfortable to shoot than .308, and are less likely to over-penetrate interior walls and kill someone on the other side.

Another big thing to remember when you’re talking about .223 vs. .308 – .223 is going to be easier to shoot well in 100% of circumstances. A .308 could have all the stopping power in the world, but it doesn’t matter if you can’t hit the target where it matters. On a farm, in an apartment, or a subdivision, a .223, especially in an AR platform, gives you a better chance of getting that good hit you need.

.223 is the clear winner in the suburbs too — if you think about the possible distances for shots you’re going to need to take. A well set up 16 inch gun with a quality red dot sight will solve all your marksmanship problems from 1-300 yards. Put a low power variable optic on that same rifle, and now it’s good for engagements out to 800 yards, assuming your skills are up to the task. This logic applies to rural areas as well, with the warning mentioned above about large dangerous game animals. If I live in bear country I’m not rocking a .223, although I’m also not rocking a .308 in bear country.

The Army Picks Its Winner 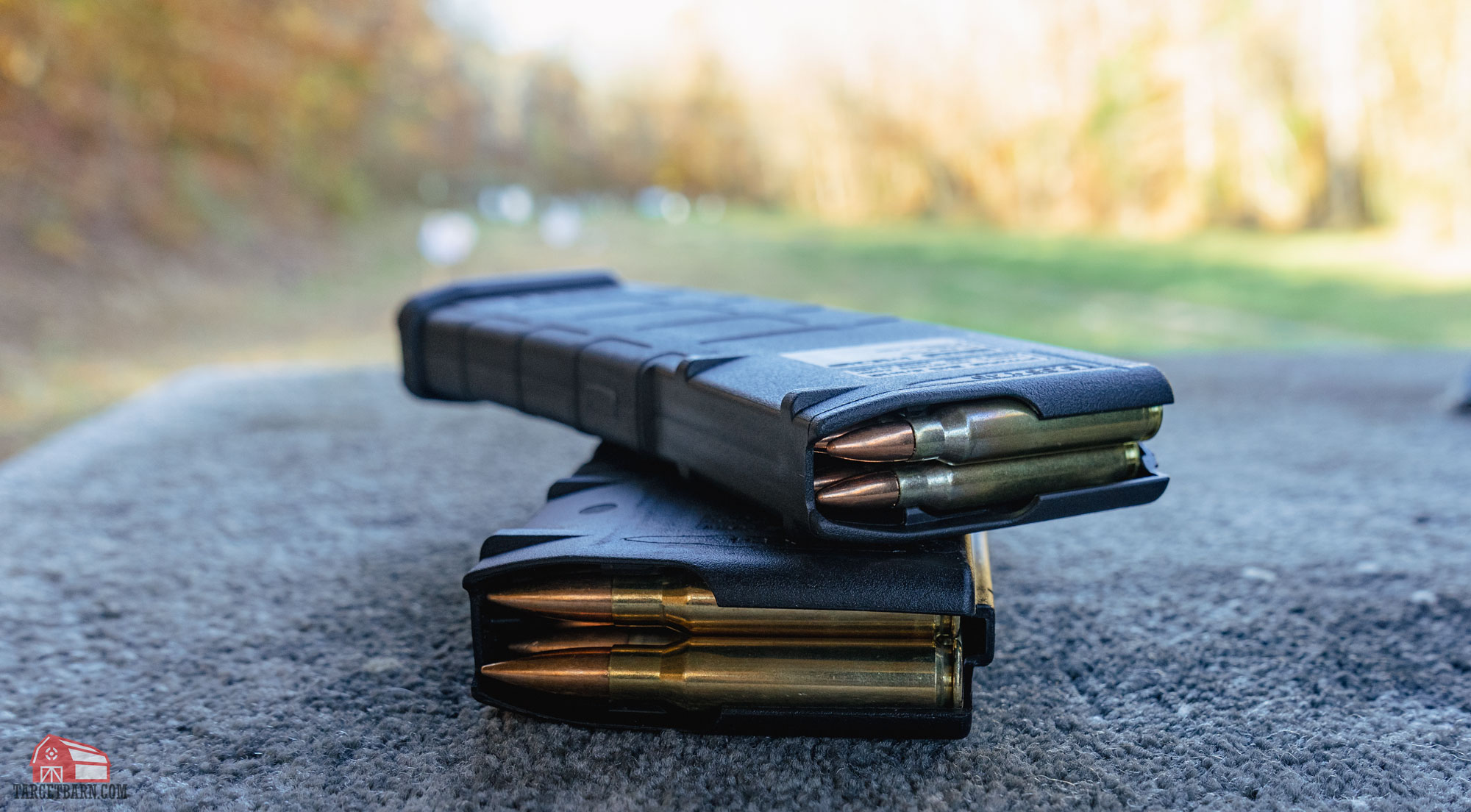 Of course, the truth is that the question of .223 vs .308 was already answered by the US Army in the 1960s when they ditched the M14 in favor of the vastly superior M16, and have stuck with the 5.56 NATO cartridge ever since. The .308 (or 7.62 NATO) was relegated to specialty roles, while M16s and M4 Carbines have done all the real fighting, dropping entire graveyards full of dudes with 5.56/.223 rounds. That’s the answer right there.

Which is Right for You? 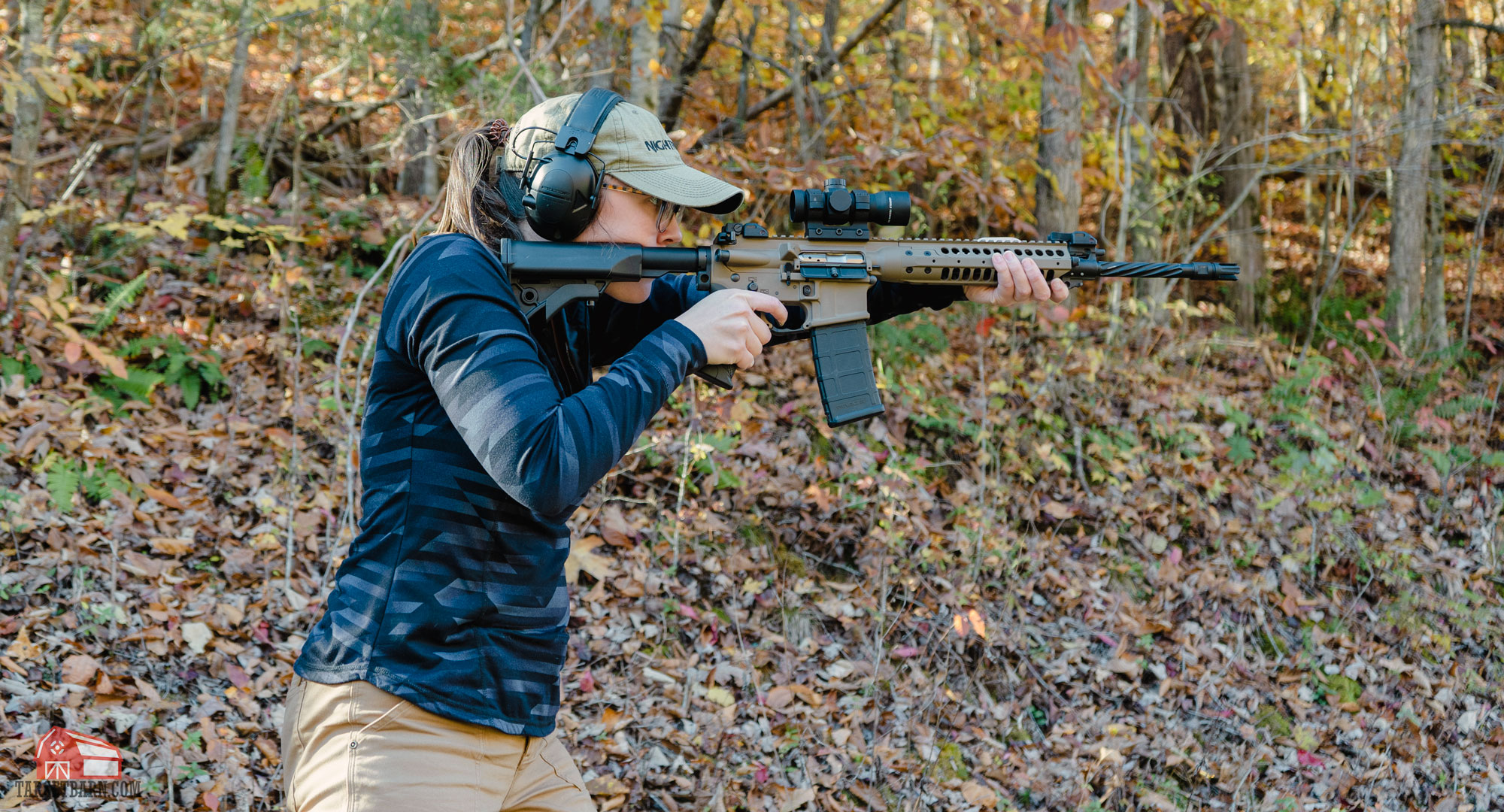 For the average gun owner in average circumstances, there is no practical reason to pick a .308 rifle over an AR15 rifle chambered in .223/5.56. The .223 is good at a lot of stuff. It offers a wide array of grain weights and bullet types. As a result, you can make it better at stuff that maybe a 55 grain FMJ isn’t good at.

The .308 is good at hitting things at distances where little old .223 ammunition drops off, especially in the zone between 800 and 1000 meters. Also, I wouldn’t want to be forced to use a .223 to kill a large bear or a moose. So, if your home defense scenario involves the realistic potential for dangerous large animal encounters or 800+ meter shots, get a .308. If you want a .308 because you think it’s cool, that’s great and by all means knock your socks off. But don’t trick yourself into thinking it’s better than a .223, because unless you’re shooting elk or stuff at 900 yards, it isn’t.