I hope you’re ready for 1,000 words of unrestrained gun nerdery. In this article we’re going to examine a question that literally tens of people have asked: what’s the difference between .38 Super vs. 9mm? For starters, let’s take a look at some information that might be surprising to some of our readers (although not to us super nerds).

While the 9mm is often thought of as a modern cartridge, it’s actually old enough to be the .38 Super’s father. 9mm Luger, which we’ll refer to as 9mm for the duration of this article, was introduced in 1902, and is essentially a .30 Luger cartridge that was necked up to accept a .355 diameter bullet. The .38 Super wasn’t introduced until 1929, some 27 years later. Like the 9mm, it was designed off another cartridge, the .38 ACP.

The .38 Super retains the same case dimensions as the much lower pressure .38 ACP. This is why, in the 70s, most manufacturers began to mark their Super ammo as +P. This prevented people from attempting to fire it out of guns made for .38 ACP. This isn’t as much of a problem these days, since no one makes guns in .38 ACP.

And right there is where the similarities end! The .38 Super and the 9mm have taken wildly different developmental paths, creating two different, yet intertwining stories.

History of the .38 Super

It’s easy to see how we ended up where we are. The 9mm is the most popular centerfire round for service pistols and consumers by a considerable margin. In North America, shooters confine the .38 Super almost entirely to competition shooting and collectors’ guns.

This article will focus on use in the United States. You should also know .38 Super is popular in Central and South America for civilian firearms owners. One of the established reasons for this is that many Latin American countries restrict ownership of “military” firearms calibers like 9mm or .45 ACP, but allow citizens to own guns chambered in “recreational” cartridges like .38 Super.

Through the early 1900s and up until the end of the Second World War, the 9mm was not a popular round in the United States for many users. The dominant cartridges of the time were the common .38 Special, which police used frequently, and of course the .45 ACP. There were other rounds commercially available. John Moses Browning, the greatest gun designer to ever live, developed many of those.

Popularity Among Law Enforcement and Criminals

The .38 Super was created in 1929, allegedly for police work. The Super was developed as a gear solution to a marksmanship problem, much like the 10mm that would follow it. Police administrators believed their existing stock of .38 Special revolvers and .45 ACP pistols lacked the penetration to defeat vehicle bodies and the light armor sometimes worn by criminals of the era. The US was engulfed in the Great Depression and the now infamous crime spree of the time, with names like Dillinger and Baby Face Nelson making the papers on a regular basis.

Colt saw a market opportunity. It upscaled the existing .38 ACP cartridge to a higher pressure, accommodating a 130 grain FMJ bullet. The company chambered its 1911 pistol for the cartridge. A commercial success, it also saw some popularity with law enforcement of the era.

At least one member of the criminal element used the caliber too, the aforementioned Baby Face Nelson. Nelson had a custom 1911 built by gunsmith Hyman Lebman in .38 Super. This 1911 featured a vertical foregrip and compensator to control what must have been prodigious muzzle flip. It also used a custom-built 22 round magazine.

The Depression largely ended with the USA’s entrance into World War 2. By then the .38 Super had already waned in popularity, eclipsed by the introduction of the .357 Magnum in 1935. The .357 Magnum offered law enforcement all of the penetration they wanted. It allowed them to keep using revolvers, which at the time they considered far superior for police work than a semi-automatic pistol.

History of the 9mm

As a generation of GIs went off to war, many of them returned with a curious item: a 9mm pistol. Pistols were popular items as war time trophies. Soldiers returned from the Eastern war with Lugers, Walther P38s, and even the occasional Nazi-manufactured Browning High Power. This sudden new market for 9mm ammo was the first hole in the dam. It was a small hole, but what really blew things open for the 9mm was the creation of NATO. All of the USA’s allies agreed to adopt the 9mm as their standard handgun cartridge. In contrast, the USA clung to the .45 ACP until 1985.

Up to 1985, the 9mm was slowly growing in popularity in the States, with various companies experimenting with double stack pistols for service and law enforcement use. The Illinois State Police became the first major LE agency to officially adopt 9mm when they ordered the Smith & Wesson Model 39 in 1967. That relegated the .38 Super to the back seat during this time. It was still somewhat popular with consumers, but had no military or law enforcement presence to speak of.

1985 blew the doors off the pistol world when the USA switched to the 9mm, and adopted the greatest service pistol ever, the Beretta M9. This launched what shooters call the Wondernine Era, as every major LE agency raced to adopt a similar double stack semi-automatic pistol chambered in 9mm. These were the glory days of Berettas and 3rd Generation Smith & Wesson automatics, as the revolvers of yesterday were replaced nationwide with DA/SA semi-automatic pistols. Interestingly, around this time the .38 Super also experienced a resurgence, although not on the same level. 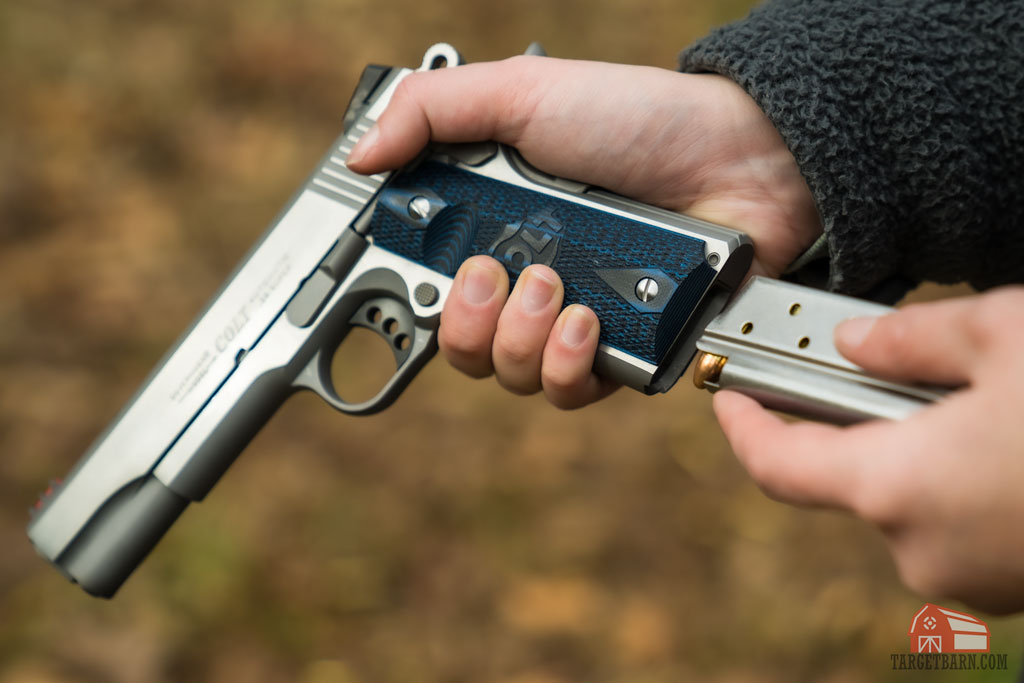 In Arizona, two young action shooting thundercats named Brian Enos and Rob Leatham were changing the face of the shooting sports, and part of that involved the .38 Super. .45 ACP dominated action shooting at the time, and the rulebook could fit on the back of a bar napkin.

Brian and Rob began to experiment with .38 Super because it was designed for the 1911 pistols they already used. They soon learned that .38 Super could be loaded hot enough to make Major power factor (which we’ve covered elsewhere) while giving the shooter an advantage in capacity over guns firing .45 ACP cartridges.

This development continued along with the developments in USPSA. The .38 Super was the cartridge of choice for shooters in Open division for many years because they could load it to Major power factor. It was so popular in this role that smaller shops such as Starline produced brass specifically for USPSA shooters. Guns were also designed to withstand a steady diet of the considerable chamber pressure generated by a Major PF Super gun.

The Super held on to its popularity through the 90s and even into the early 2010s. During this time, the 9mm itself fell off in popularity, with law enforcement agencies following the FBI’s lead and switching to the .40 S&W round in droves.

In current years, an interesting trend has emerged, which is the utter dominance of 9mm. Law enforcement agencies are going back to the 9mm, once again following in the FBI’s footsteps. This coincides with technological advancements in 9mm bullet construction, which have flattened out any terminal performance differences between it and .40 S&W.

It has also began to supplant the .38 Super as the cartridge of choice for Open division in USPSA. More shooters are opting for guns chambered in very hot loadings of 9mm that achieve Major power factor. While this trend is catching on, it’s unlikely that 9mm will completely supplant .38 Super in Open guns. It is difficult to load 9mm to Open division specifications without creating an extremely high pressure round. This is why some people prefer to stick to the tried and true .38 Super.

9mm and .38 Super have enjoyed long and successful runs as cartridges. There is no question that the 9mm is undeniably more popular than the .38 Super in North America. 9mm is a commercial juggernaut and the runaway favorite choice of the military and law enforcement. While .38 Super remains popular in competition shooting circles, it looks like that’s where it will stay. As a fascinating niche cartridge with an interesting history, its beloved by many and used by some of the most passionate shooters in the world.

I used it myself at Bianchi Cup in 2013, where I posted a personal best on the Falling Plate stage, scoring a tie on that stage with the man responsible for much of .38 Super’s modern popularity: Rob Leatham.