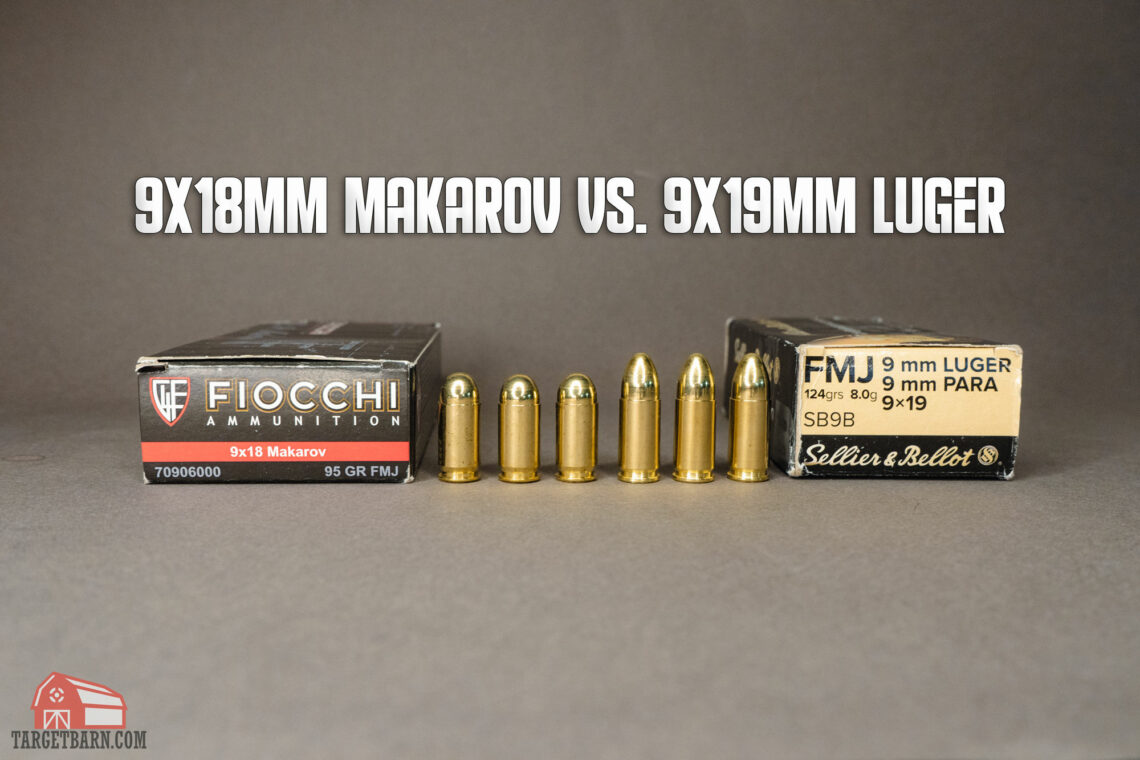 When it comes to 9mm cartridges, many shooters don’t know the difference between the 9mm Makarov vs. 9mm Luger. It’s not uncommon for a newer shooter to inadvertently buy 9x18mm Makarov ammo for their 9mm Luger pistol. Unfortunately, this ends up being a waste of money. That’s because trying to chamber 9mm Makarov in a 9mm Luger firearm is just as productive as attempting to stuff a VHS tape into a DVD player.

To help prevent this mistake, we’re breaking down the differences between the 9mm Makarov vs. 9mm Luger.

Despite sharing “9mm” in their names, the two rounds have dissimilar origins. The 9mm Luger (also known as 9x19mm Parabellum, 9mm Parabellum, and simply 9mm) is named after its creator Georg Luger, an Austrian who introduced the cartridge around the turn of the century. Germany’s military was the first to adopt the 9mm. Today it is essentially the default military and police sidearm ammunition worldwide.

The 9mm Makarov cartridge was designed by Boris V. Semin in 1946. His boss, the Soviet Union, wanted its military to have a more reliable sidearm than the 7.62x25mm Tokarev TT-33 (which had frequently proven itself incapable of retaining its own magazine during WWII). Semin upgraded the German 9x18mm Ultra cartridge so it would reliably cycle the USSR’s new direct blowback Makarov PM pistol.

Why does the 9mm Makarov have a larger diameter bullet than other 9mm rounds? Because the USSR measured calibers between the lands of the rifling instead of its grooves. The Makarov PM’s grooves aren’t very deep, but they’re deep enough to make the 9mm Makarov’s bullet 1/100” wider in diameter.

All of this is to reiterate the most important thing you can take away from the 9mm Luger vs. 9mm Makarov debate: they aren’t the same ammo. But just how different are they?

The 9mm Makarov may have a slightly wider bullet, but it is an altogether smaller handgun cartridge. It is 0.185” shorter in length, has a smaller case capacity (i.e. less room for propellant), and produces a significantly lower chamber pressure upon ignition. Paradoxically, the 9mm Makarov’s wider bullet is also lighter. Whereas 9mm Luger bullets weighing 115, 124 and 147 grains are all common, most 9mm Makarov rounds’ bullets weigh 95 grains or very close to it.

In summary, the 9mm Makarov propels a lighter bullet, and it does so at a lower velocity. Let’s see how that kind of performance compares to the 9mm Luger. 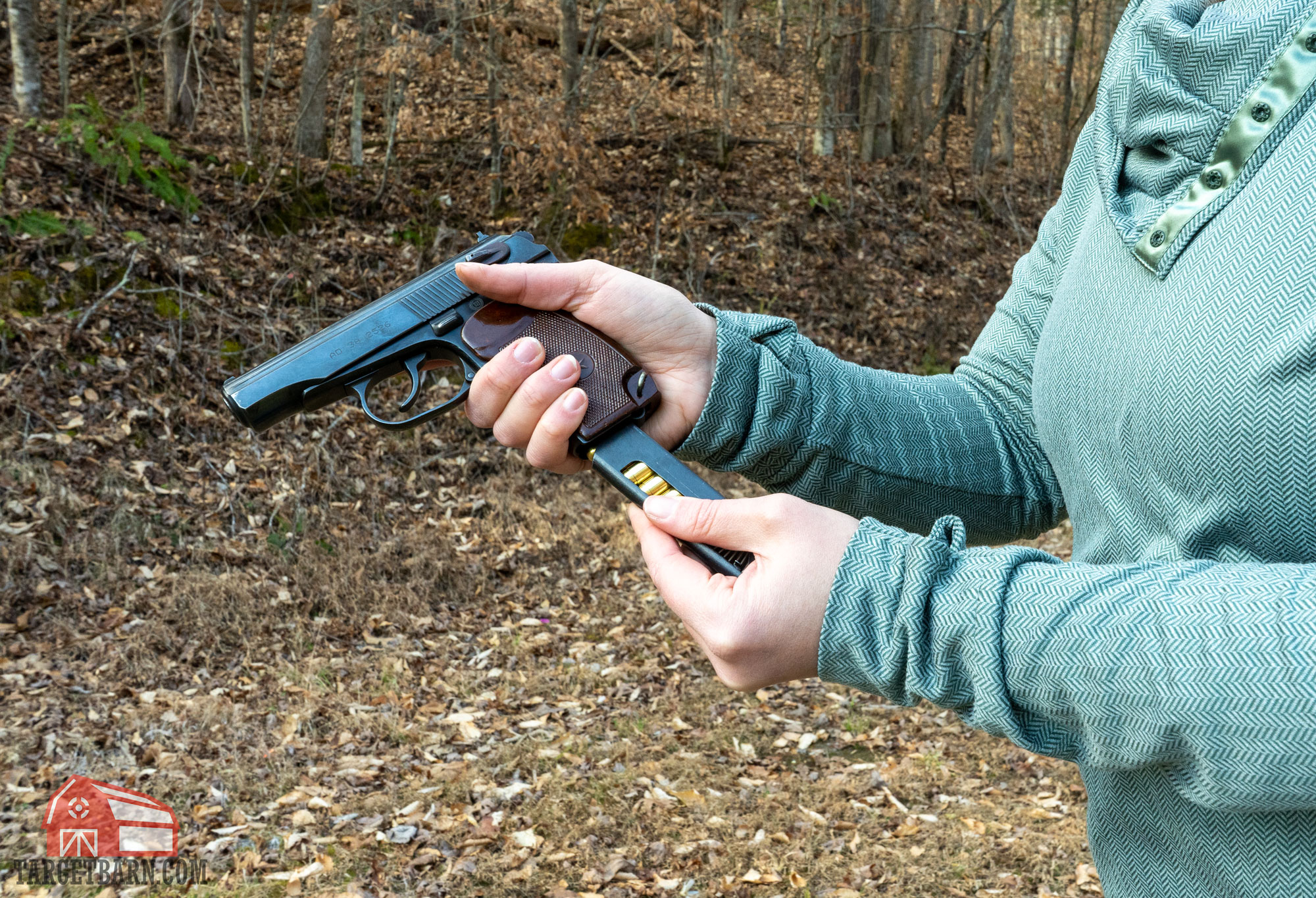 You don’t have to be a master ballistician to assume that a lighter, slower-moving bullet will exhibit a steeper trajectory. The 9mm Makarov bullet’s lower velocity means that it takes longer to reach the same distances as a 9mm Luger. This means that the bullet effectively gives gravity more time to pull it down to earth.

The 9mm Luger bullet doesn’t merely exit the barrel faster. Its greater heft also enables the bullet to conserve more momentum. This helps it to retain more kinetic energy and resist wind deflection in flight. One of the 9mm Luger key’s advantages speaks for itself in our ballistic data: the bullet hugs a flatter trajectory. That makes the 9mm Luger easier to aim, although it does not necessarily make it more accurate. If you become accustomed to the 9mm Makarov’s more pronounced bullet drop, you’ll find yourself more than capable of striking a target within its effective range of 55 yards.

“Stopping power” is a contentious phrase. It implies that some single aspect of a cartridge’s terminal performance determines its efficacy for self-defense. In fact, several factors determine how effectively a cartridge can halt a determined threat’s advance. Those factors include bullet diameter, sectional density, and propensity for terminal expansion.

But the force with which a bullet strikes its target is surely the most significant factor that determines stopping power. Luckily, that’s easy to measure. The amount of kinetic energy a bullet possesses at impact is the product of two variables: mass and velocity.

As a general rule, if you are firing in self-defense, you want your bullets to hit the threat with at least 220 to 300 ft lbs of energy. The 9mm’s heavier and higher-velocity bullet can easily retain over 220 ft lbs of energy until 100 yards. Up close it can exceed the minimum advised threshold significantly. In contrast, if the 9mm Makarov bullet’s kinetic energy ever exceeds 220 ft lbs, it only does so for a few yards past the muzzle. Once again, shot placement counts for a lot, but you want to bring enough gun to a life-threatening altercation. 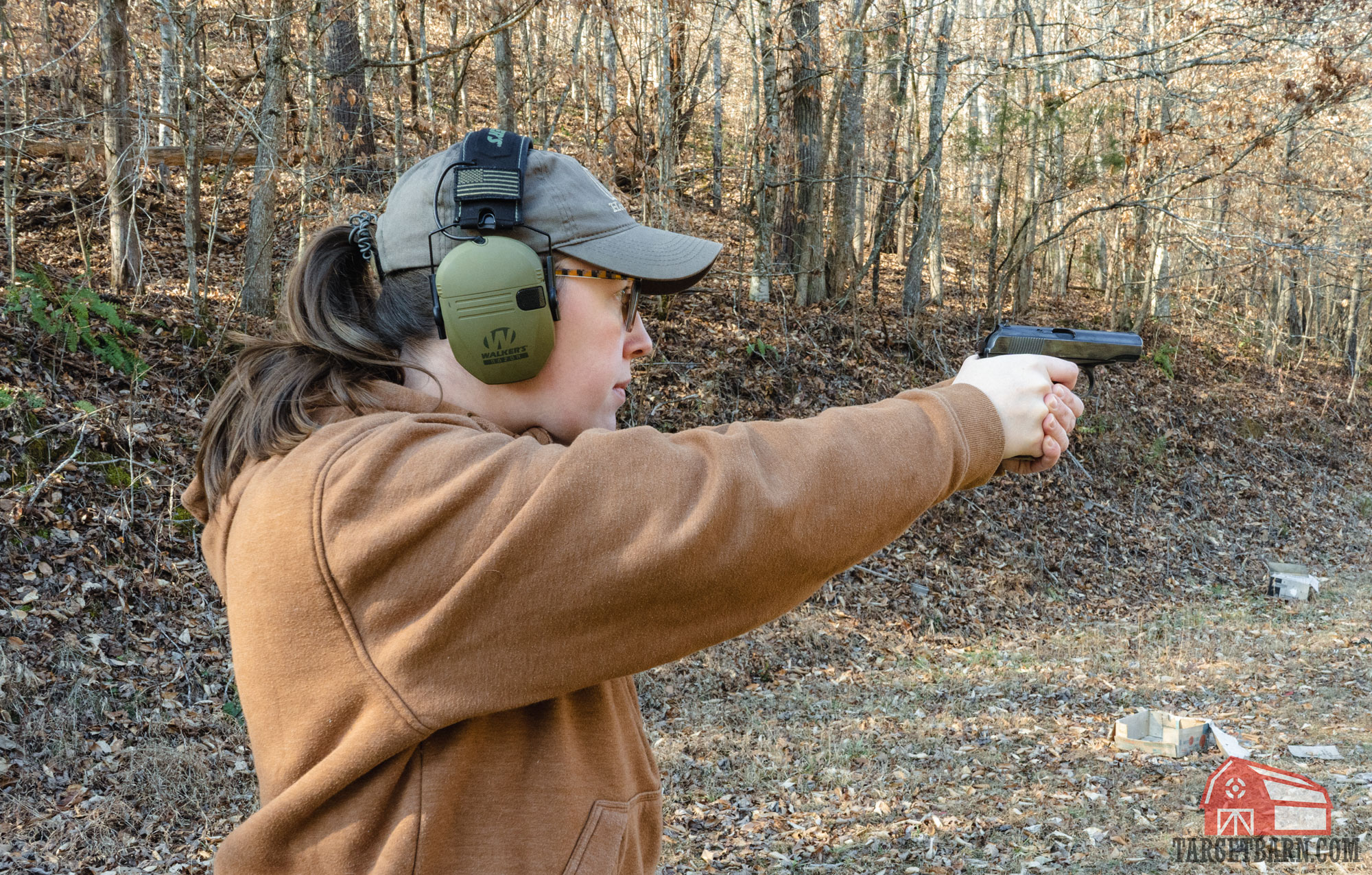 Lower recoil is good for a number of reasons. In a defensive shooting scenario, less recoil means your barrel won’t jerk upward as much every time you fire. Put another way, lower recoil makes it easier to keep your sights on target.

Perceived recoil is impossible to measure. It is subjective – we cannot measure what you’ll feel. However, many shooters note the difference in recoil between the two rounds. Despite it being the more powerful round, shooters often find the recoil of the 9mm less than that of the 9mm Makarov. A lot of factors affect recoil, however there’s likely one big reason for this: handgun action design.

You see, most 9mm Makarov pistols are blowback action. In a blowback action pistol, the slide is held closed by its mass and a recoil spring and the barrel does not move when a round is fired. Whereas most modern 9mm pistols are short recoil operated, also known as locked-breech pistols. When a round is fired out of a recoil operated pistols, the barrel and slide move together for a portion of the cycling of the slide. These recoil operated pistols can handle the higher pressure rounds like the 9mm.

9mm Luger ammo is still cheaper than 9mm Makarov despite all of that for one reason: greater demand. Manufacturers produce staggering amounts of the most popular centerfire handgun ammunition on the planet, which offsets its relatively greater production costs.

9mm Luger is naturally far easier to find online and in stores. 9mm Makarov is beloved by many Americans. However, the ammo really only saw military and police service in Russia and Eastern Bloc countries. It will never be as popular here as the 9mm Luger, which most police departments utilize in the field and which is also the standard handgun ammunition for the U.S. Armed Forces. Likewise, 9mm Luger handguns are far easier to find than 9mm Makarov. 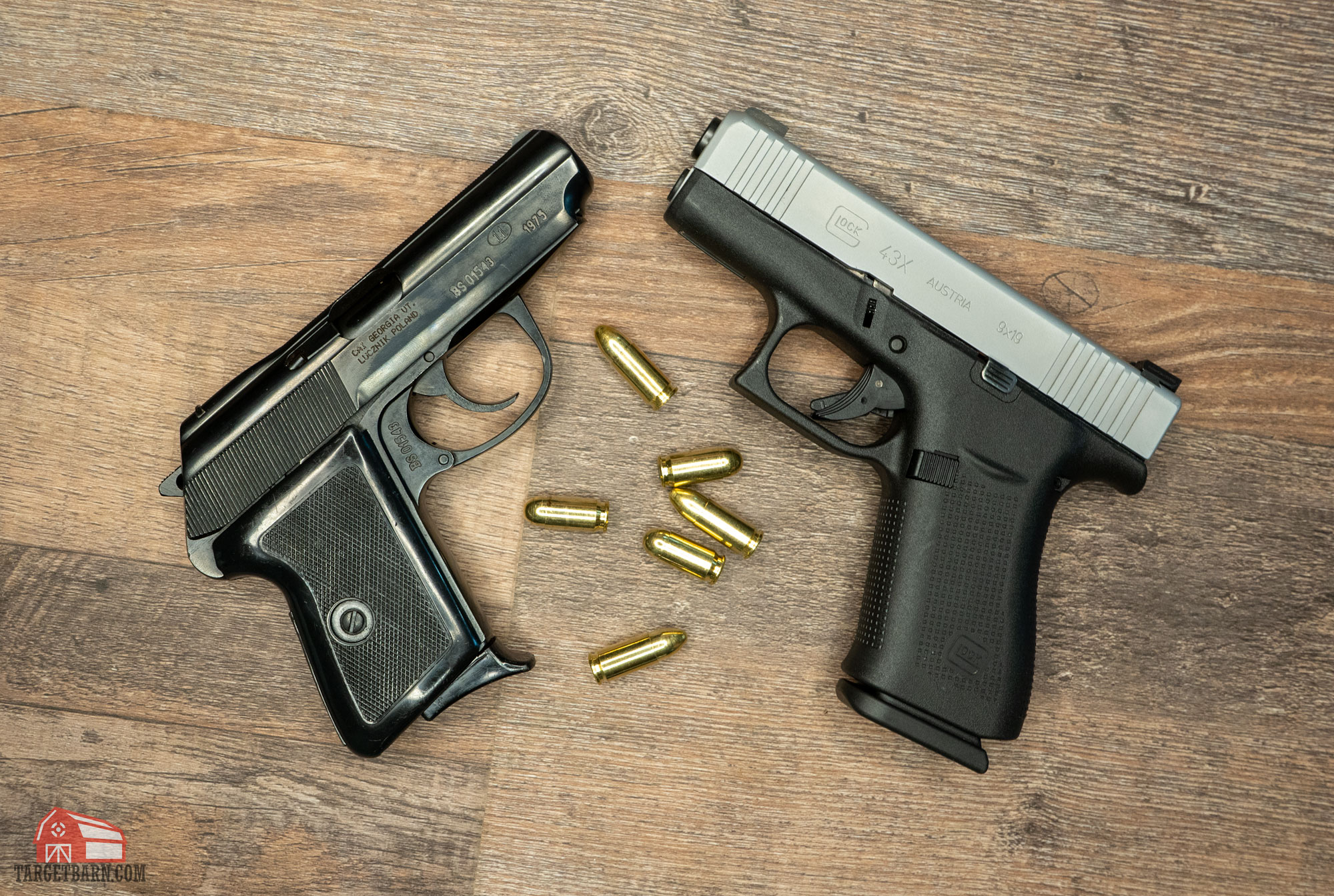 While the 9mm Makarov is a cool round for those who like Eastern European guns, it doesn’t have many advantages over the 9mm Luger. The 9mm round has a flatter trajectory and higher likelihood of neutralizing a threat in one shot. It is also much more affordable and available.

Is the 9mm Makarov bad? Not at all. It’s a joy to fire, and those Russian and Eastern Bloc handguns are plenty effective for self-defense just like they are beautifully designed. By all means, buy a 9mm Makarov pistol and enjoy every second you spend owning it. But if you’re looking for a good pistol for self defense, it’s hard to do much better than 9mm Luger.