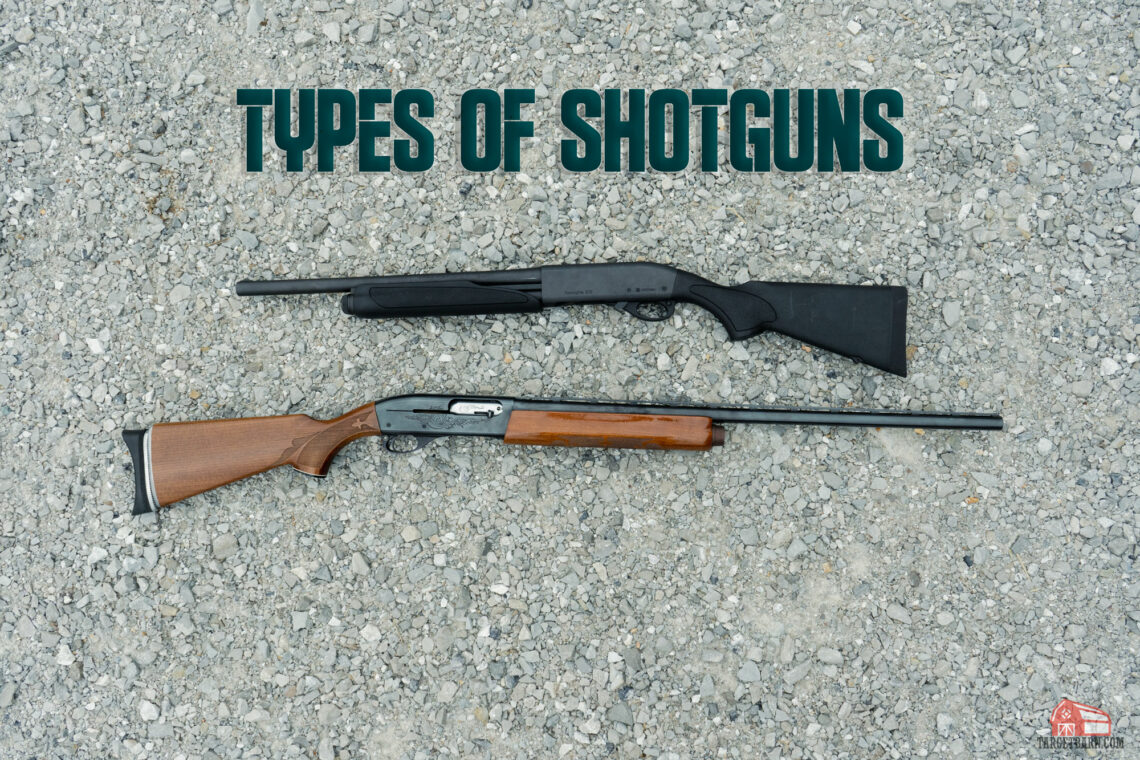 Shooters typically refer to shotguns by their bore diameters – e.g. 12 Gauge, 20 Gauge and 410 Bore. But this classification system doesn’t indicate how a shotgun actually functions or the types of shotguns!

A few of the most common types of shotguns are:

Some shotguns are designed to automatically feed new rounds while simultaneously extracting fired shells from their chambers, just like a machine gun would rapidly cycle ammunition. Some have to be folded open so the shooter can manually load each round. Others feature built-in feeding and extraction mechanisms which require manual operation by the shooter.

Without going into obscene amounts of detail, let’s review all the major types of shotguns.

This is the oldest type of shotgun – essentially equivalent to a muzzleloader. The blunderbuss doesn’t actually fire shotshells. Instead the shooter has to separately load the gunpowder, wad, shot, and finally a piece of felt or other stopper material in order to keep the payload in place.

The blunderbuss is as impractical as it sounds, and no longer used by anyone save for historic firearm enthusiasts. If you grew up watching Looney Tunes, then you’ve already seen the blunderbuss featured in any cartoon about pilgrims.

Break-action shotguns are commonly available in two different styles: single barrel and double barrel. A double barrel shotgun may be either an over/under or a side-by-side. This describes the positioning of the barrels in relation to one another. If you see a shotgun with two barrels, it is a break-action.

Unlike a break-action, a lever-action shotgun’s barrel and action do not separate from one another. This type of shotgun permits more rapid fire thanks to its integral magazine which stores multiple rounds of ammunition. When the shooter pushes the lever forward and then pulls it back down into place, the shotgun ejects the spent shell and loads a new round respectively.

The military never embraced lever-action shotguns (and rifles, for that matter) for military applications. Why? Because the necessity of manipulating the lever makes firing a lever-action unmanageable while the shooter is prone.

But the lever-action shotgun does make rapid fire far easier than the simpler break-action ever could, hence the popularity of John Browning’s Winchester Model 1887 shotgun following its introduction in the late 19th century. If you have watched Terminator 2: Judgment Day, then you probably thought Arnold looked mighty frosty while he was spin cocking an M1877 on a motorcycle. We do not recommend attempting this.

Like the lever-action, the pump-action shotgun features a magazine (which may be either integral to the shotgun or detachable from it). To extract the old shell and feed a new round in the chamber, the shooter simply has to pull back the forearm and then return it to its original position.

Pump-action shotguns are rugged, reliable and versatile – you’re just as likely to see one in the hands of a deer hunter as you are a law enforcement officer. This is the shotgun which produces that iconic “chik-TCHACK” when it is loaded (a sound film editors love adding regardless of which kind of shotgun the actor is using).

Bolt-action rifles are revered for their exceptional accuracy, owing largely to the solidity of their chambers. They are not at all common, but deer hunters occasionally use them when firing slug ammo. Turkey hunters use them as well in some instances.

A bolt-action shotgun may have a detachable box magazine, albeit a small one. However, the time it takes to operate the bolt mechanism pretty much precludes this type of shotgun from use during any real world tactical scenarios. Of all places, Lake Placid 2 featured a Browning A-Bolt, although its actual utility for hunting one-ton gators is unknown.

Revolver shotguns work on the same principle as revolver handguns: A cylinder chambered with multiple shotshells rotates after each shot to align the next round with the barrel. These shotguns are relatively rare, with the Russian MTs255 being just one notable exception.

There are revolver handguns which can actually fire shotshells, however, such as the S&W Governor and the Taurus Judge. Available chambered for both 45 Long Colt and 410 Bore ammunition, these revolvers have become increasingly popular in recent years. Better Call Saul fans might recognize the Judge which Tuco used to threaten Mike.

Revolver shotguns work on the same principle as revolver handguns. A cylinder chambered with multiple shotshells rotates after each shot to align the next round with the barrel. These shotguns are relatively rare, with the Russian MTs255 being just one notable exception.

There are revolver handguns which can actually fire shotshells, however, such as the S&W Governor and the Taurus Judge. Available chambered for both 45 Long Colt and 410 Bore ammunition, these revolvers have become increasingly popular in recent years. Better Call Saul fans might recognize the Judge which Tuco used to threaten Mike.

If you’re familiar with a Glock pistol or the AR-15, then you already understand the underlying concept of a semi-automatic firearm: one shot fired every time the shooter pulls the trigger.

A semi-automatic shotgun works no differently. Instead of requiring the shooter to operate a lever or forend, the semi-auto shotgun utilizes the energy generated by the previous shell fired to load the next round into place.

Because it can fire so much more rapidly than other types of shotguns, semi-autos are extremely effective in tactical scenarios. Shooters often keep “AR-12” shotguns at the ready for home defense. They are extremely popular among bird hunters as well.

Danny Glover handled a semi-auto Benelli M1 Super 90 in the movie Predator 2 – so effectively, in fact, that he fired more rounds than its magazine is capable of holding.

Automatic shotguns may have selective fire settings which permit the shooter to choose between burst, semi-auto and full auto fire. They generally feature detachable magazines to increase capacity and reduce reloading time. (It takes very little effort to empty a shotgun which can fire 300 rounds per minute.)

Do you want an automatic shotgun? You’re not going to find any at Wally World. Thanks to the Firearm Owners Protection Act, it’s illegal for civilians to own automatic firearms manufactured after May 19th, 1986. If all you’re after is rapid fire, the easiest route is to go for a semi-auto,

Breaking Bad fans witnessed the automatic shotgun’s incredible power when Kenny unloaded his AA-12 on Hank and Gomez. (We still tear up when we think about it.) 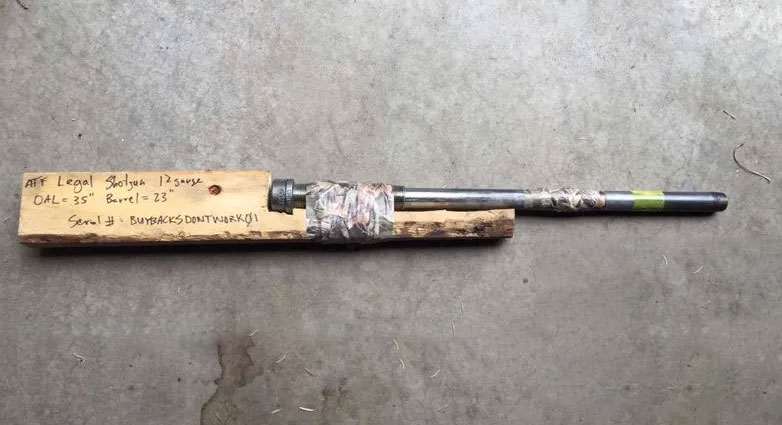 You won’t find a slamfire shotgun at the store, either. It is a DIY special, which at the very least requires two lengths of steel pipe, an end cap, a nail or some other component that can double as a firing pin, and of course a shotshell. The shooter slides back the pipe holding the shell until it slams into the makeshift firing pin, and presto – ignition.

We strongly advise against building a slamfire shotgun for very obvious reasons. Although, survivalists are naturally interested in any firearm which they can construct out of scrap in a matter of minutes. Many people with less honorable intentions know how to build these things as well. There have also been notable instances of people profiting by selling crude slamfire shotguns to government gun buyback programs.

Types of Shotguns: The Takeaway

As you can see, the types of shotguns available are diverse. The type of shotgun that is right for you will depend on your intended use. Whichever type of shotgun you decide upon, be sure you load it with quality 12GA ammo.