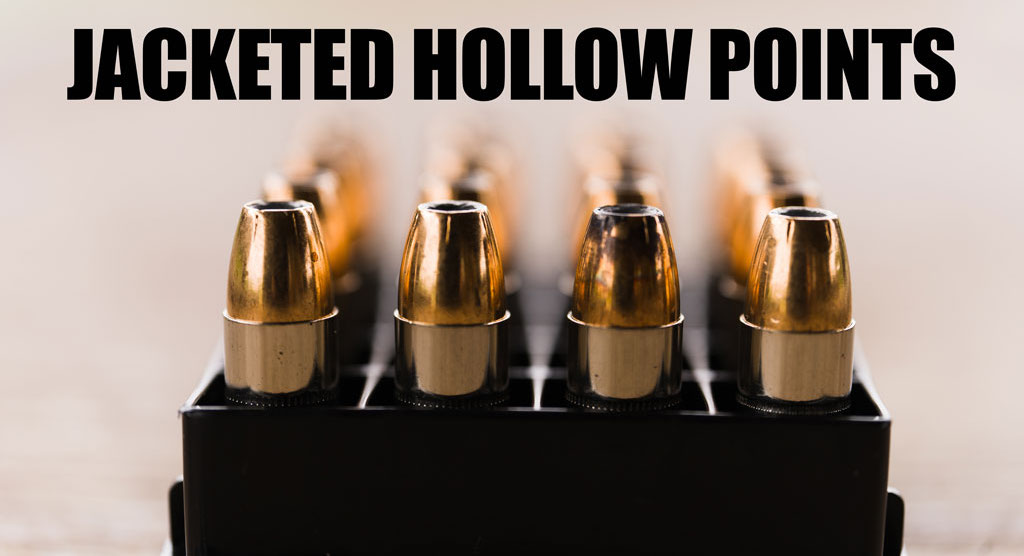 Getting the most bang for your buck isn’t cheap…pun intended. Jacketed hollow point ammo can cost in the ballpark of $1 per round.  While JHP cartridges are on the more expensive end of the ammunition spectrum, considering what you are asking them to do, you should make peace with the monetary trade-off.

Sleep a little better at night knowing you have the best if you are planning to use JHP’s as defensive rounds. Ask almost any experienced firearm user what type of ammo they use in their carry gun. I’d almost guarantee you will hear jacketed hollow points.

Why is this, and what makes a jacketed hollow point so special for use in defensive firearms? The beauty of jacketed hollow points is how they are designed to impact their target.  We’ll get into that shortly, but for now let’s unpack the JHP, starting with its anatomy. 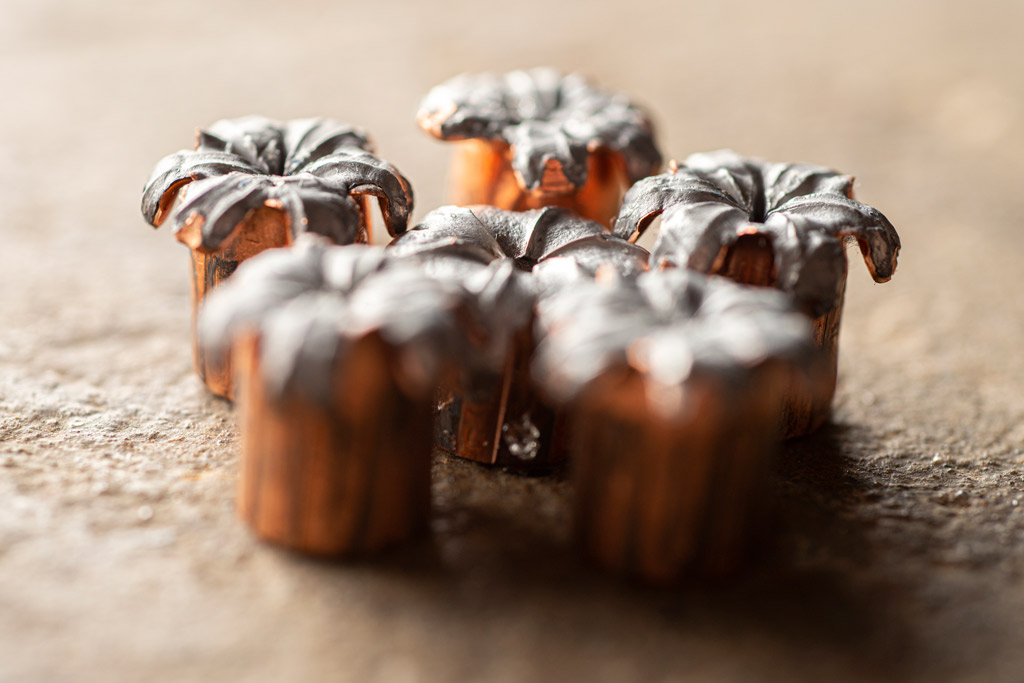 True to their name, the hollow point round does, in fact, have a hollowed out center tip. Don’t be confused. The entire bullet isn’t hollow, only the tip is. When this type of round impacts a soft tissue target, the tip should turn into an impressive mushroom shape or (depending on your artistic perceptions), it may also be perceived as a flower bloom.

The thought behind this type of design is when the JHP bullet makes its way through soft tissue at a high enough speed, that tissue then begins to forcefully occupy the cavity of the round. This occupation forces the material of the bullet to expand and drive outward, creating a wider wound channel and inflicting intense trauma.

You can also visualize it as if you were to drag an opened up umbrella across a lake, open side first. If you were to get it moving fast enough, through the water, the umbrella would eventually mushroom back onto itself. That’s kind of what we’re going for here with the concept of the JHP. Although with JHP rounds, that “mushrooming back” occurrence is intended– through carefully engineered ballistic design.

The jacket on a JHP provides a barrier that decreases the amount of lead that is left behind within the barrel of your gun.  Without that jacket (like an HP bullet), the lead can quickly begin to occupy the rifling of your barrel after each round exits your firearm.

A take away from this would be a round with a jacket means potentially less required cleanings than a non-jacketed round, due to slower overall fouling build up. 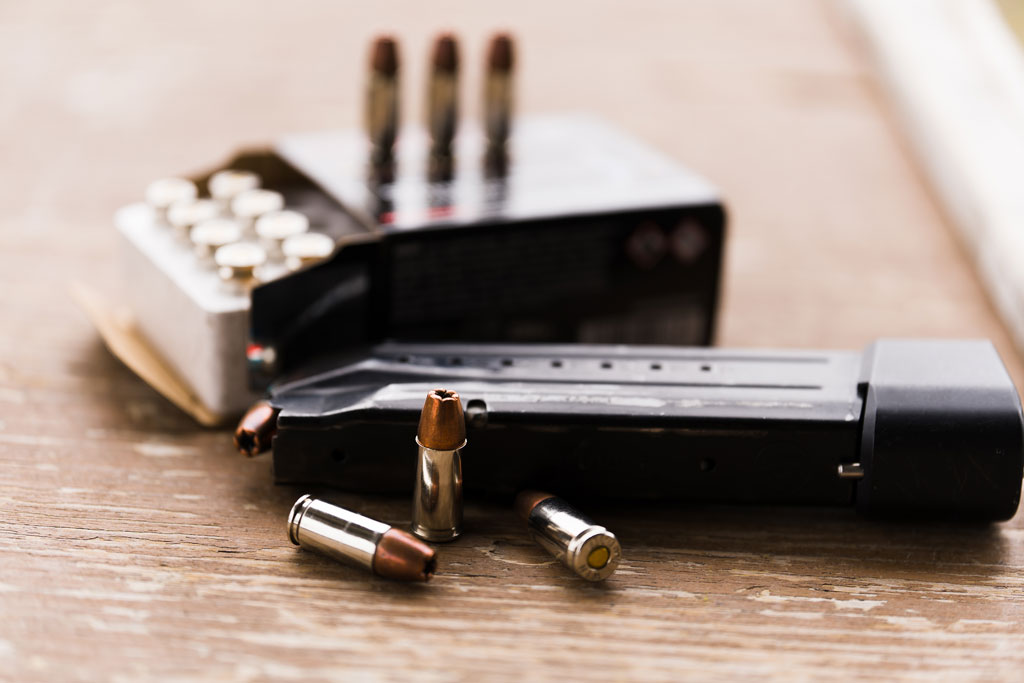 That jacket also helps to ensure a more reliable and dependable feeding process.  Especially with a semiautomatic weapon where that round is occupying several different places and moving from one spot to the next, in a relatively short time. (i.e., from the magazine, then getting stripped and chambered, then the empty case extracted and ejected.)

The smooth, harder external surface of the jacket also usually allows for less variation over rounds that may tend to deform at lower temperatures. This can increase overall reliability. 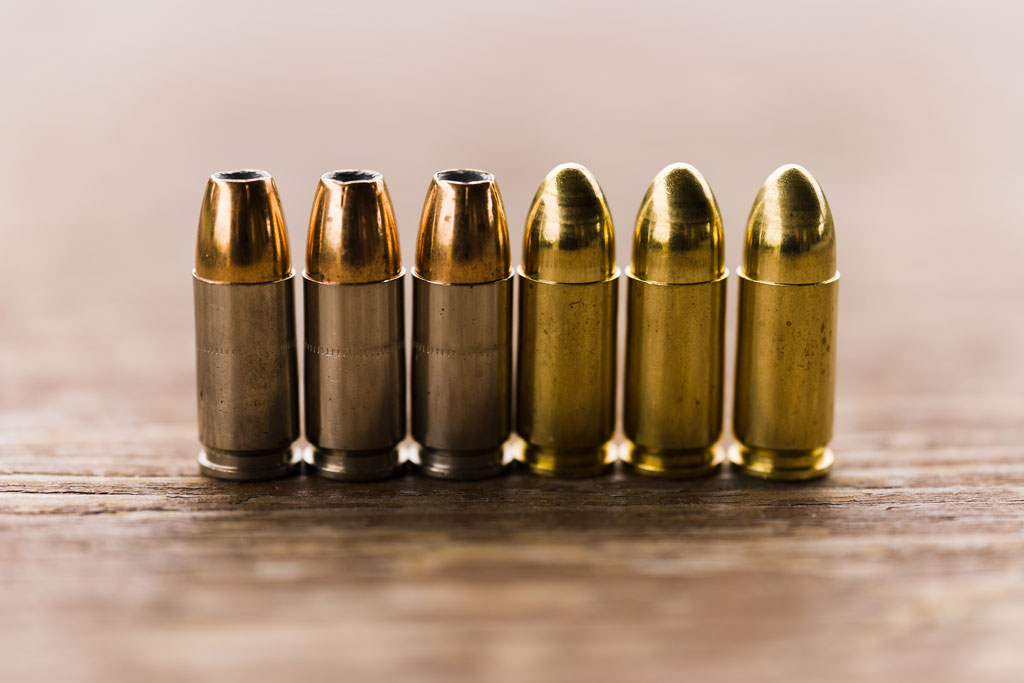 The consensus within the firearms community would agree that full metal jacket rounds are best for any bulk volume or high round count shooting (i.e., competitive shooting sports, general practice and drills). Fiocchi 9mm 115 grain, or Blazer Brass 9mm 124 grain would be good such examples. Alternately, you will then see the majority of shooters arming themselves defensively, using jacketed hollow point rounds.

A notable difference between the two, would be that full metal jacket projectiles have a “soft” core surrounded by a casing of a harder metal.  The term itself generally refers to a lead bullet encased within a harder metal. 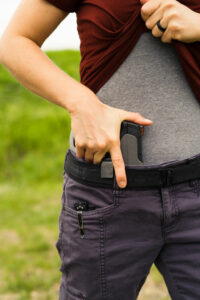 The jacket surrounding a FMJ round, prohibits extreme expansion.  That lack of expansion can cause greater penetration distances, with a narrower wound channel.

An FMJ has a high likelihood of punching one hole in their target, and then quickly punching another one out upon exit. This means that your round has a much higher chance of traveling THROUGH your intended target, cover or barricade.

In comparison, the expansion from a jacketed hollow point’s end “bloom” allows for an increased wound channel in the soft tissue of its target.

This is what most defensive carriers are going for—they want that jacketed hollow point to drop a would be “bad-person”, ideally with instant de-animation. The increased expansion of the round upon impact, hopefully, will stop the attacker from causing any further harm.

Or perhaps as hunters, they are looking to bring down one’s would be dinner. It is the same concept, regardless—the more significant the wound channel, hopefully, the quicker your target goes down.

Let’s get into a little more detail on discussing wound channels.

If you’ve ever pressed the tip of your finger and watched it change color from a typical hue to a lighter shade, then released it to view all the blood rush back, that’s because human soft tissue is rather supple.

If any type of through and through damage were to occur,  your soft tissue should attempt to get right to work at doing its best to shrink that wound and try to minimize the damage of the hole. The body’s ability to “recover” enough to keep going after impact is quite impressive. There are many documented scenarios where shooters took several rounds to neutralize a perpetrator.  The amount of potential follow up shots required may also depend on the determination of your would-be attacker.

However, if impact were to occur with a jacketed hollow point, the massive expansion that occurs does not allow the body to be very successful at closing up around the wound channel.

When the JHP hits its target, usually the tip of the bullet will open up similar to peeling a banana. That process of expanding creates a much larger surface area of impact, hence doing more damage along the way. More damage usually means more bleeding, more severed tissue, and ideally a higher loss of blood pressure.

LESS CHANCE OF OVER PENETRATION 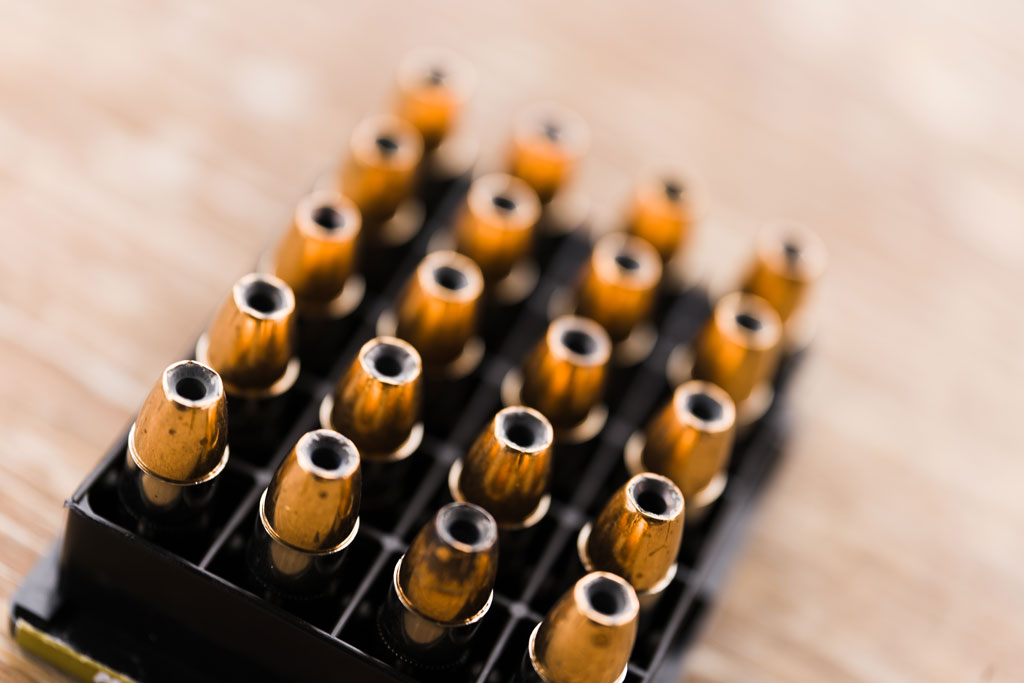 Another strong characteristic of the JHP is its ability to avoid over penetration in most cases.  The FBI’s protocol is held as the gold standard in ballistics testing. In that protocol, the recommended penetration depth we would be looking at is 12-18”.

If the FBI test and data is of interest to you, the Winchester Elite Defender might be worth trying. As per the description on the box, these rounds have purposefully been “engineered to maximize terminal ballistics as defined by FBI test protocol.”

However, certain calibers such as the 10mm or .45 may achieve impact at a lower velocity, but at the same time attain greater penetration, when the rounds were fired from shorter pistol barrels than when compared to being fired from a longer test barrel even with some degree of a higher velocity.

Further, a jacketed hollow point bullet typically loses speed when it impacts a target. This typically makes it less likely than FMJ or ball ammo to pass through that target. This means there is less of a chance that the round will keep on moving into subsequent walls, barriers or inflicting other collateral damage, as opposed to perhaps a full metal jacket round that does not expand nearly as much. 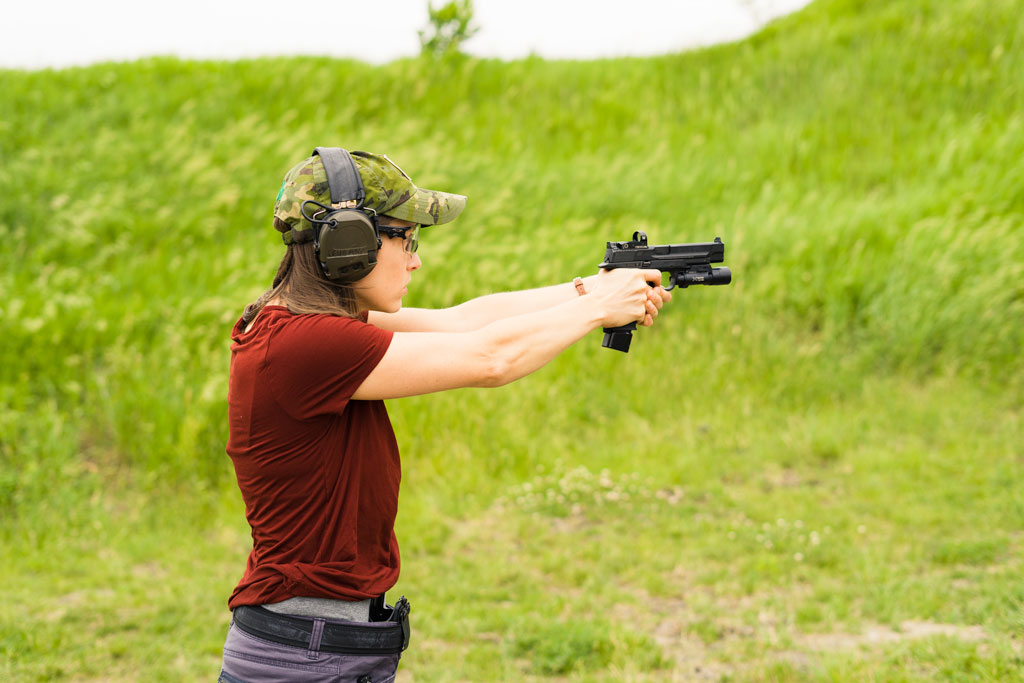 Yet, most human beings likely will not stand perfectly still and wait for you to perfect your draw stroke, like a paper target on a static range.  Of course, most homo sapiens and animals tend to move and act unpredictably. This means that it is not possible to 100% guarantee that there will be no over penetration. What if you just nick them, or hit a narrower body part than you had intended? These are all possibilities to keep in mind.

As a defensive shooter, most are looking for the perfect formula. We want reliable expansion to the maximum desired diameter to occur at the same time as optimum penetration of precisely the right distance.

We all want to avoid unintentional ricochets along with breaking the known firearms safety rule, “Be aware of your target, and what is behind it.”  I like to add to that rule: and in front of it, and beside it.

If the round was unable to expand fully, or unreliably expands, then that can mean unnecessary collateral damage as well as creating a wound that is not large enough to take down your desired target.

Should You Carry Jacketed Hollow Points?

It is essential to do your research and test your rounds. I would advocate pulling up the statistics from the aforementioned FBI Protocol in Ballistics tests. From there, you can compare the data and thoughtfully draw your own conclusions.

You want to ensure that the ammo you are using to protect yourself is reliable and dependable when paired with your carry gun. As with any time you try new ammo of any kind, you want to make sure to cycle it through your firearm during practice sessions to make certain it responds as intended.

You do not want the first time you draw your firearm to defend your life, to be when you realize that your gun doesn’t like properly feeding whatever ammunition you’ve decided to load.

Nevertheless, if you are attempting to cause the largest wound channel possible, and stop a perpetrator from continuing or starting their attack, then jacketed hollow points should be in your arsenal.